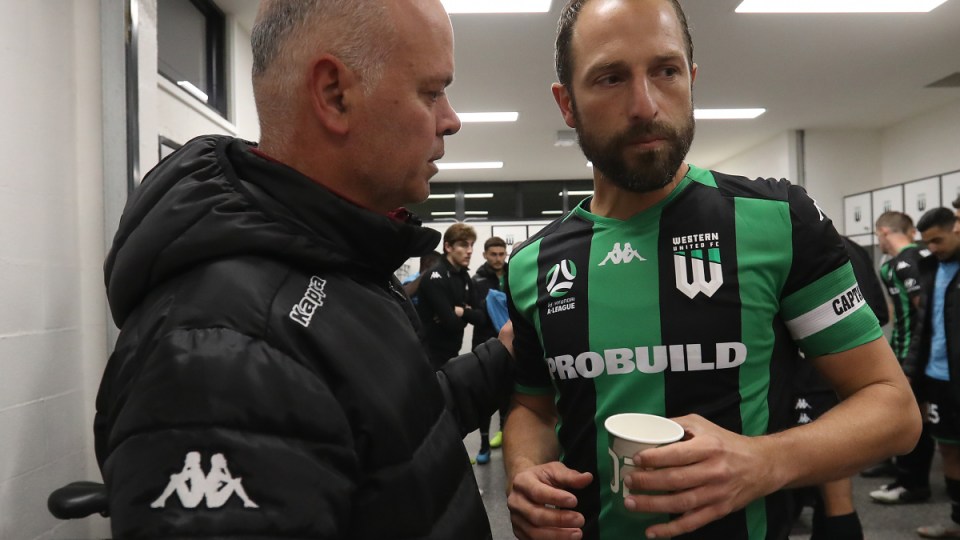 A figure instantly recognisable across community grounds throughout Victoria, John Anastasiadis’ history in the Australian game is a long one.

Breaking into the first team of then-National Soccer League (NSL) side Heidelberg United as a teenager in 1987, he quickly won a call-up to the Young Socceroos – playing in the 1987 FIFA World Youth Championships – before earning a move to Greek Super League side PAOK.

Playing over 200 games during almost a decade in the Hellenic top flight, PAOK’s forays into Europe gave Anastasiadis priceless opportunities to play against the likes of Iván Zamorano, Toni Polster and Diego Maradona.

Returning to Australia in 1997, he won two NSL championships under Ange Postecoglou at South Melbourne and became the first, and only, Australian to score at the legendary Maracanã when he netted against Mexican side Necaxa at the 2000 FIFA World Club Championships.

9′ GOALLLLLLLL! #SMFC open the scoring through John Anastasiadis! Trimboli is allowed too much room in midfield as the ball eventually finds De Amicis, who squares the ball to Anastasiadis to score past his brother Dean! #SMFC #20yearsago pic.twitter.com/Vg02euVfbx

Next came a short stint as player-coach of Yarraville Glory before his inauspicious start to a full-time career in coaching in 2005 at South Melbourne. Just three players – including his brother, Dean – turned up for his first session in charge of a club still reeling from its exclusion from the newly launched A-League.

Yet success soon arrived. The fledgling gaffer delivered a Victorian Premier League championship to Hellas in 2006, and helped foster the careers of players such as Dino Djulbic, Ivan Franjic, Nick Kalmar and Cameron Watson.

But it was a move to Bentleigh Greens in 2011 that truly cemented Anastasiadis as a star on the rise.

Arriving at a club previously devoid of major trophies, the new coach’s ability in the dugout and shrewd recruiting delivered to Kingston Heath the 2015 and 2017 Victorian Championship, 2016 Premiership, 2016 and 2018 Dockerty Cups and an appearance in the semi-finals of the FFA Cup in 2014 and 2018.

Indeed, the acceptance of the potential viability of a National Second Division amongst the Australian footballing public likely owes a not insignificant debt to the work of Anastasiadis and his Greens sides: their sustained success at a national and local level providing a compelling narrative of talent waiting to be tapped into beyond the A-League.

However, despite his playing pedigree, coaching aptitude and success at the grassroots level long earmarking him as a future A-League coach there was one problem: such an opportunity never arose.

Supplementing his coaching income with work outside football, he lacked high-profile media roles to keep him in the national spotlight and create momentum around him.

Furthermore, not possessing a Socceroos cap – Anastasiadis joining the likes of Louis Christodoulou, Jim Patikas and Chris Kalantzis in curiously failing to earn a call-up despite long and successful tenures in the Greek top-flight – his name lacked the brand power of a John Aloisi or Tony Popovic.

Regrettably, it appeared as though the risk-averse nature of A-League clubs, combined with pervasive insecurity that exists in the Australian game when it comes to trusting homegrown coaches, would conspire to stymie any hopes of progression beyond the NPL.

“It passes through your mind,” Anastasiadis told The New Daily when asked about disillusionment.

“There’s no doubt, you think ‘is it ever going to happen?’

“But you never know what’s around the corner so you’ve got to keep your hopes up, keep positive and hope things will fall into place and I was lucky enough for that to happen.”

Indeed, thanks to A-League expansion, it did happen.

Expansion already paying off with more jobs for coaches! Congrats @WesternMelbGrp on the foresight to bring a quality football man & coaching mind in John Anastasiadis from the NPL into the @ALeague with you! @FC_Australia @FFA @FFACup #coachesmatter #coachescare #careerpath https://t.co/3qy2l1VuDN

While the development of new opportunities for Australian footballers is a key selling point when the growth of the A-League is mentioned, there is also a corresponding increase in opportunities for budding administrators, operational staff and coaches.

Thus, despite seemingly possessing closer ties to rival bidders South Melbourne and Team 11, Anastasiadis in January of 2019 became the first signing in Western United history when he came aboard as an assistant coach.

In May, Mark Rudan, who also had a successful stint in NPL NSW with Sydney United, was named head coach.

“It’s really exciting to see where the club was ten months ago, to where it is today,” Anastasiadis said.

“Once we started playing the games it really kicked in and really hit me hard, saying ‘well, you’re here in the A-League.’

“While you’re coaching you always have hope to be involved in the top echelon of the country.

“I was very happy about getting the opportunity and I’m grateful for that – that Western United have looked into the NPL to have a coach to be part of the staff.

“For me, it’s just a culmination of a lot of hard work of all these years in the NPL in the hope of getting an opportunity and I’m just grateful that United have taken a punt on me.”

The grassroots hero finally getting a shot at the big time