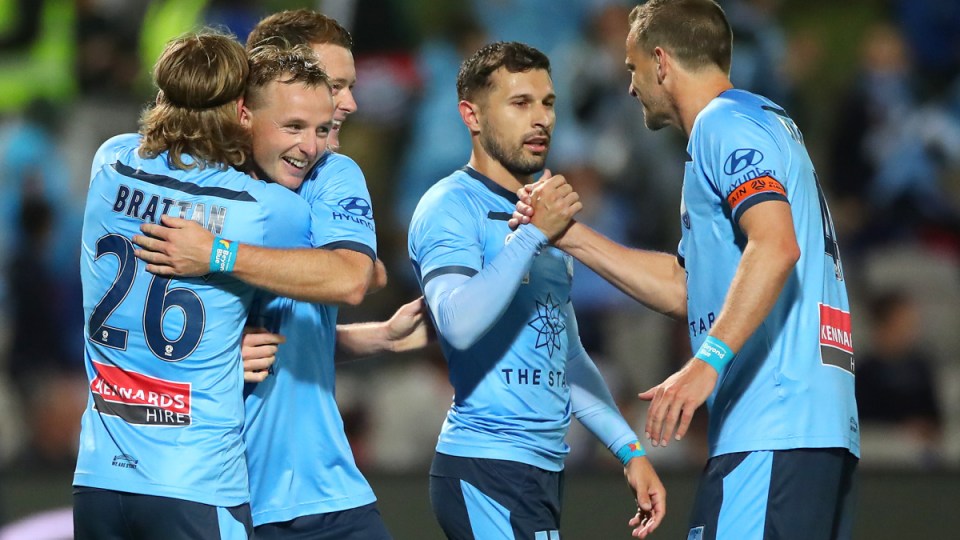 Sydney’s ex-Victory striker Kosta Barbarouses scored the winning goal in Sunday evening’s tense encounter at Netstrata Jubilee Stadium and made good on his pre-game promise not to celebrate.

With the match tied at 1-1, Barbarouses netted in the 68th minute after Rhyan Grant’s shot bounced off the crossbar in heavy traffic.

The 16,116-strong Sydney crowd went wild, but Barbarouses was stoic as he made good on his word not to react if he scored against his former team.

However, the assist from Grant was just as important in his 200th match for the club.

For Victory, it was a hostile welcome to the scene of last season’s 6-1 loss in the finals to its Sydney counterparts.

Sydney had all the ball early but failed to create promising chances to score.

Prolific Victory striker Ola Toivonen opened the scoring in the 45th minute with his fourth goal of the season, heading the ball in at the far post off a brilliant cross from Josh Hope to take the 1-0 lead.

The Swede had another chance when he was fouled just after half-time by Grant, but his kick sailed over the crossbar.

Sydney responded in the 61st minute as Adam Le Fondre headed in a goal after a wealth of possession to level at 1-1, followed soon after by the winning Barbarouses goal.

At Dolphins Stadium, Brisbane’s wait for goals and a victory under Robbie Fowler came to a dramatic end with a thrilling 4-3 comeback A-League win over Melbourne City.

In front of a near-capacity 9387 home crowd, Roar came back from a 3-1 deficit to secure its first win of the season in a rip-roaring second-half display.

Irishman Roy O’Donovan scored a hat-trick, including two second-half penalties, while strike partner Aaron Amadi-Holloway marked his starting debut for Roar with the other goal.

The result means top-of-the-table City slip to its first loss of this campaign, despite Socceroos striker Jamie Maclaren marking his return from a hamstring injury with a hat-trick of his own.

City took an early lead when Maclaren made the most of a missed clearance by Roar captain Tom Aldred to pounce in the sixth minute.

Roar was left livid when O’Donovan thought he’d been upended by City’s Harrison Delbridge on the quarter-hour in the penalty area but their pleas fell on deaf ears.

Fowler must have been cursing his luck when, in the 29th minute, Maclaren leapt over Roar defender Daniel Bowles to put the visitors 2-0 up.

A tactical switch meant Fowler removed Jake McGing before half-time and Bowles also came off at the break.

Roar switched to three at the back and made the most of a strong breeze to turn the match on its head.

Amadi-Holloway’s scrambled back-post effort in the 60th minute pulled Roar back to within one.

O’Donovan converted from the spot to put Roar level in the 63rd minute after Amadi-Holloway was tripped.

Brisbane must have felt it would have to settle for a point after a cross by Aldred drifted past City goalkeeper Dean Bouzanis and hit the far post, seeming to cross the line before Bouzanis clawed it away.

The lack of goal line technology might have saved City on that occasion but, just minutes later, VAR official Craig Zetter called referee Alex King to have a look at a shot blocked by City substitute Denis Genreau.

King ruled the block to be a handball and O’Donovan slotted away the winner from the spot to secure his hat-trick.

“If you didn’t know that our team and our players have got character, I think we’ve shown it in abundance with that second-half performance,” Fowler said.

I thought we were quite incredible. To score four goals against the league leaders … it sure shows you that we’ve got a little bit about us.’’

Deflated City coach Erick Mombaerts said he had not seen the decisive penalty call but, regardless, believed his team should have done better to see out the match with a 3-1 lead.

“We need to be stronger … it is the first game we have to play like that – maybe it is also a good experience,” the Frenchman said.

“We have to understand and to find a solution in these kinds of games.”

Roar heads to Wellington next week to face the winless Phoenix, while City plays Western Sydney at Bankwest Stadium.