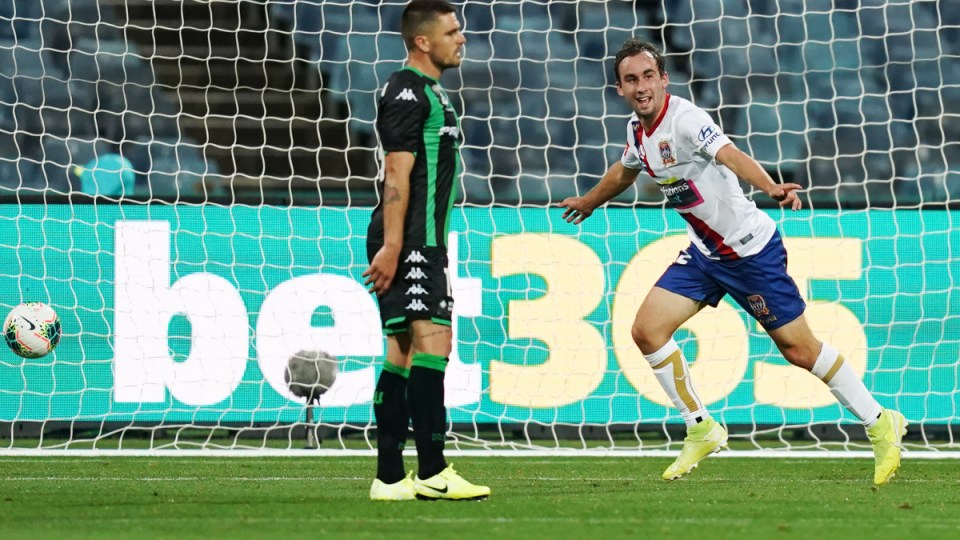 The A-League season is starting to heat up, with Newcastle Jets upsetting Western United 1-0 in Geelong ahead of Sunday’s big Melbourne Victory v Sydney FC clash.

Newcastle deservedly took the lead after 36 minutes through 19-year-old striker Angus Thurgate and while United grew into the game, they were unable to find a response at GMHBA Stadium on Saturday.

Matt Millar found Thurgate, who showed some terrific hold-up play to one-touch the ball to Dimi Petratos and continue his run.

Petratos fed a well-weighted ball back through to Thurgate, who slid a delightful finish past Kurto for his second career A-League goal and the Jets first win of the season.

In the other match Adelaide reeled off three A-League wins in a row for the first time since its 2015-16 championship after cruising to a 3-1 victory over Central Coast.

Kruse is likely to make his anticipated season debut when Melbourne Victory visit the harbour city on Sunday.

The Socceroo has missed Melbourne’s first five games due to a hamstring issue, but has been rushed back into a squad depleted by injury and players on international duty.

It will be Kruse’s first A-League game since leaving the Victory in 2011.

“Obviously he’s had a fantastic career overseas in Germany and a lot of success with the national team,” Wilkinson told AAP.

It’s great to have him back in the league. He’s obviously a dangerous player. He’s got a lot of pace, great skills. He could score goals but he could also assist goals and lay on that final pass.

“He’s one we’re going to have to watch, but we’re not going to solely focus on him.

Andrew Redmayne was also in Saudi Arabia but was unused and will be fresh, while Michael Zullo returns from injury for his season debut.

The clash will be the first at Nestrata Jubilee Oval since the Sky Blues knocked Melbourne out at last year’s semi-finals with a record 6-1 rout.

Half the ground was relaid when the Sky Blues trained there on Saturday.