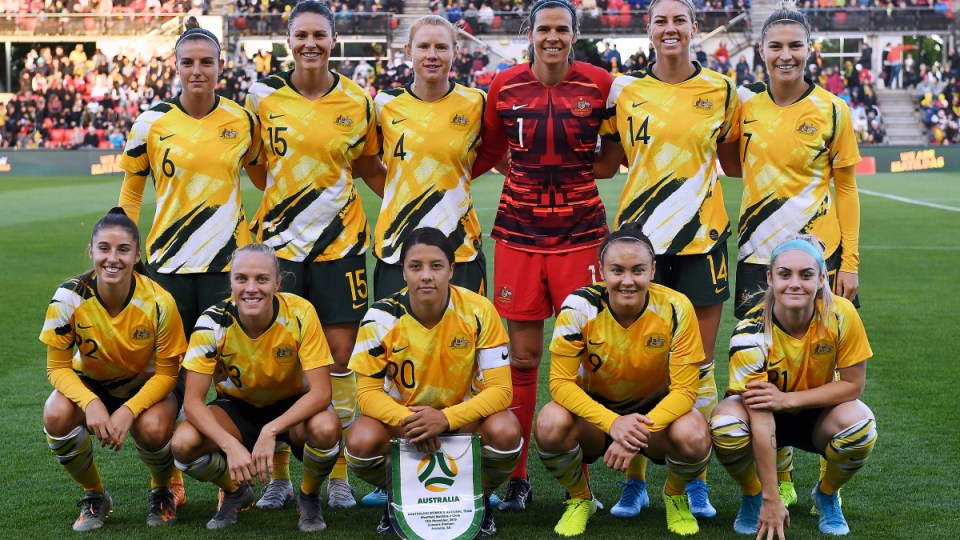 The Matildas line-up for the match against Chile. Photo: Getty

With the 2019-20 W-League season set to kick off on Thursday night, little argument can be made that women’s football is in the midst of an explosion in popularity, exposure, respect and goodwill never before experienced in its history.

On Saturday night, the Matildas defeated Chile 2-1 in a friendly at Bankwest Stadium in front of 20,029 fans – an Australian record crowd for a women’s international.

The victory came just days after agreeing to a new collective bargaining agreement (CBA) that enshrines an industry-leading policy of equal performance bonuses for the Socceroos and Matildas, while commercial parameters will apply equally to players across both teams.

Thank you to the 20,029 fans who have come to see us and have made this match the highest-attended women’s football international in Australian history!#WeAreMatildas #AUSvCHI pic.twitter.com/GI4dBqjQ5g

The ‘Tillies’ then followed that up on Tuesday with a 1-0 win over the Chileans in front of 10,342 fans in Adelaide.

On Saturday evening, 77,768 fans poured into the spiritual home of football at Wembley Stadium to watch the women’s sides of England – whose fully professional FA Super League continues to go from strength to strength and will serve as the future home of Sam Kerr – and Germany battle it out in a friendly.

The biggest *ever* crowd for a #Lionesses match 👏 pic.twitter.com/Kt6nSJrfQz

World champions the United States recently completed a wildly successful victory tour of their homeland to celebrate their 2019 World Cup win and, last Friday, scored a major off-field win when their lawsuit against the US Soccer Federation advocating for equal pay with their male equivalents was granted class-action status by a US federal judge.

As the W-League commences, members of a revamped Western Sydney Wanderers and Adelaide United will run out onto Marconi Stadium for ‘Hersday Night Football’ and kickstart a season under a new CBA that will bring W-League player’s minimum hourly remuneration rates to the same levels of the A-League.

The growth of the game is undeniable, and credit must be given to the countless hours, days, months and years of (frequently unpaid) toil from those that have fought to bring the women’s game into the public eye.

However, despite the progress, the arduous evolution of women’s football remains incomplete; work remains to consolidate hard-fought gains, continue the process of making the game more commercially viable and carry on the journey begun by unsung pioneers.

While a welcome development, a $16,344 minimum salary in no shape or form represents a wage that can support a W-League player in search of a full-time career taken for granted by her male peers.

Instead, players are forced to supplement their footballing incomes with outside work that detracts from development or take up overseas contracts that mean they are, effectively, never able to enjoy a proper offseason.

Women’s sides around Australia remain under-resourced compared to their male equivalents as coaching, facility and support staff offerings lag behind.

Though the W-League, welcomely, continues to have all of its games broadcast or streamed, a proper home-and-away season remains a goal rather than a reality and there exist only nine sides in the league; creating a bottleneck at the top of the game and squeezing opportunities for the next generation of Matildas looking to come through the ranks.

“I have been in Europe for the last couple of years and I’ve seen what they’ve invested,” Matildas head coach Ante Miličić said on Monday.

“And now, that is the challenge for us.

“With the [equal pay] agreement that has been put in place, we know now that it’s a serious sport. But now it’s for us to build on that.

“We need to expand on that if we want to continue because, to be perfectly honest, particularly Europe is really, really moving forward at a quick rate.

“And if we don’t address these [issues], I think it’s going to be difficult in the years to come.”

The challenges facing the game extend beyond the W-League.

At a state level, the ostensible second tier of women’s football – the WNPL – has yet to be rolled out universally across the nation and the standards – both in terms of on-field product and facilities and resourcing – is wildly inconsistent in the areas it does exist.

The quality of coaching available to young girls coming through the system, as well as the pathways that they are ushered into when they display potential, requires a detailed examination to ensure youngsters are being properly developed and empowered; particularly in the light of disappointing Asian Championship results for the Junior and Young Matildas.

The facilities offered to these young girls – who are the subject of a never-ending pitched battle between football, Australian rules, rugby and other sports for their participation – also presents a significant challenge.

Football’s place as the number one club-based participation sport in Australia has been confirmed, with the release of the latest AusPlay survey by Sport Australia.#FFAhttps://t.co/6m7yXUvTe8

“The challenges are predominantly around facilities,” said Stuart Hodge, the CEO of Football New South Wales.

“Specifically, in the women’s and girl’s space, we found that there’s only a very small percentage [of facilities] that are female friendly when it comes to change rooms.

“So, we’ve got a situation where women and girls are having to get changed in cars and behind trees or finding another location because they don’t have a quality amenity block that they can go into and change.

“It’s not just an issue for NSW, it’s an issue going on around the country regarding the lack of facilities.

“It’s the major challenge for our game and it’s a major hindrance for us if we are going to continue the growth that we’ve had.

“We certainly have a fantastic case to argue; we are the biggest participation sport, we are for all abilities, we are for all ages and all genders. We really do tick the boxes of inclusion.”