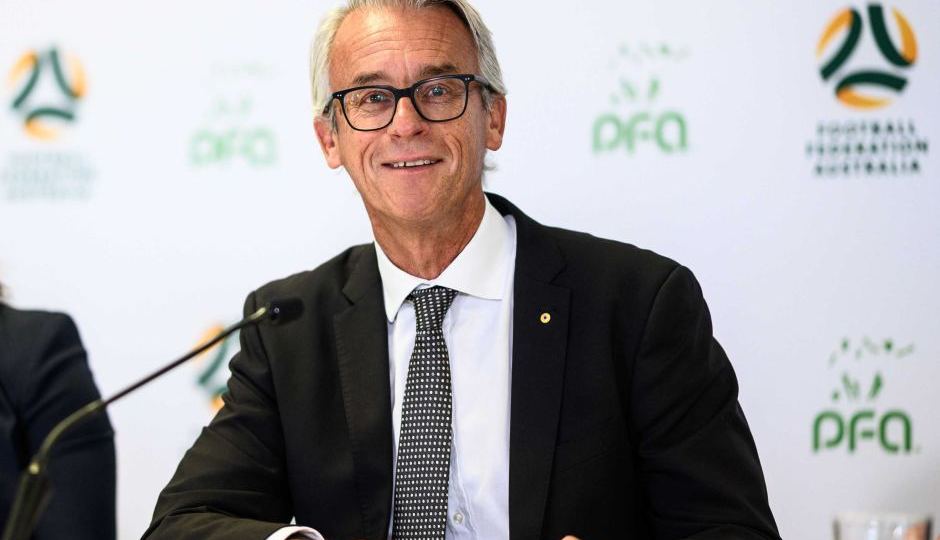 FFA chief David Gallop says the new football CBA is 'a great bit of progress' for attracting girls and women to the game. Photo: AAP

War is being waged at home and abroad as sports officials seeking dominance on a cluttered landscape refocus more keenly on “the women’s game”.

This week’s historic pay-deal in football, where revenue generated by the Socceroos and the Matildas will be pooled and equally distributed, sends a warning shot to other team sports.

The chief executive of Football Federation Australia (FFA), David Gallop, told The Ticket, “We are in a battle for athletes”.

“Women and girls are the highest-growing areas of our participation base and to have our national team revenue split evenly between the two is a great bit of progress.

“It’s not the final answer … there’s obviously still work to do, but it is progress.”

Gallop chose to highlight AFLW and cricket as those sports posing the most threat to football’s status as the number one club-based participation sport in Australia.

“There are a number of other examples in the country where female athletes could have turned themselves to different sports — cricket or AFLW — so we are looking to say the Matildas is a great aspiration for girls and women players of the game and you will be rewarded well for it.”

On the global scale, football’s dominance is unrivalled, yet internally, the battle for gender equity is raging.

The reigning FIFA Women’s World Cup champions, the USA, have a day in court next May after suing their national governing body for gender discrimination.

They are arguing for equal pay and conditions, something their Australian counterparts now have.

The first female player to win the prestigious Ballon D’Or in 2017, Ada Hegerberg, was missing from this year’s FIFA Women’s World Cup after refusing to play for Norway, claiming the country doesn’t do enough for its female players.

In Iran, women are still fighting for equal access to all football matches — not as players, merely spectators.

Despite adopting its own human rights policy in June 2017, FIFA has been slow, even absent, in ensuring its member nations abide by it.

FIFA has not yet publicly commented on Australia’s landmark pay-deal.

Neither the FFA nor Professional Footballers Australia (PFA) have heard from FIFA after this week’s announcement.

Chief executive of the PFA, John Didulica, said he’s not expecting to, although “FIFA’s charter is very clear”.

“They [FIFA] have explicitly stated that they don’t just respect human rights, they promote human rights,” he said.

“The notion of gender equality, or discriminating on the basis of gender, is fundamental to UN Human Rights treaties.

“So if FIFA is true to their own statutes they have an obligation — not just to consider equality — but to actively promote it.”

Former Matilda and now deputy chief executive of the PFA, Kate Gill, was asked if she had a message she’d like to deliver to the FIFA president, Gianni Infantino.

“The message has come from the 23 Socceroos that have stood up and said, ‘it’s time to make a change, and we are the ones that are going to show you how to do it’,” Gill said.

One organisation that has the ear of FIFA is the global player body, FIFPro, representing 65,000 professional footballers.

In the coming weeks, it is due to release Raising Our Game — a macroeconomic study of the women’s football industry.

Director of communications, Andrew Orsatti, says FIFPro is talking directly to FIFA to “make rapid progress” in women’s football “to make up for decades of neglect”.

He is confident others will follow where the Australians have led.

“The benchmark is collective bargaining to thrash out deals that stakeholders are committed to,” Orsatti said.

“We see an accelerated pattern around the world driving gender equality, which is great and long overdue.”