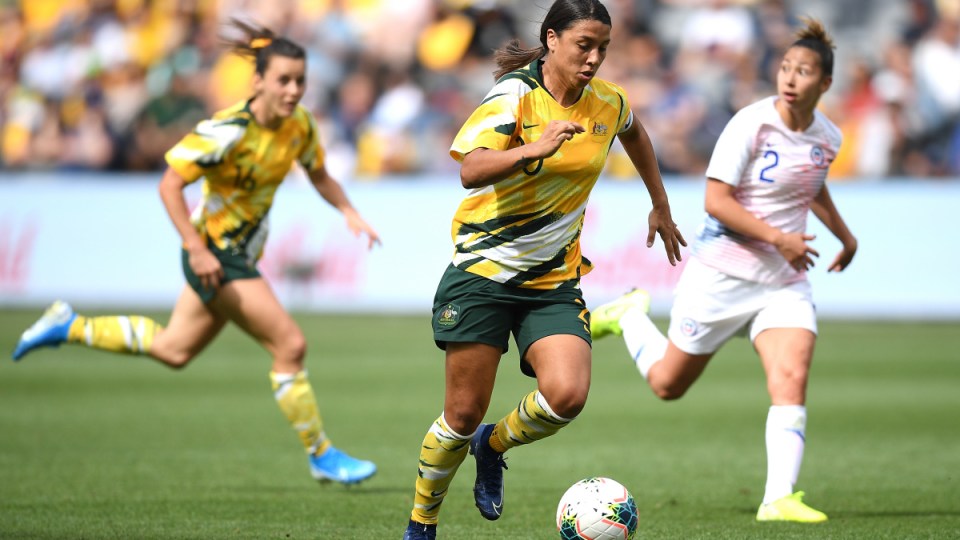 Apart from a defensive lapse in the 88th minute there was little downside for the Matildas to Saturday’s 2-1 win over Chile witnessed by a record crowd and broadcast on the ABC, further exposing one of the nation’s most successful teams to a wider audience.

With Sam Kerr making her presence felt with a goal within the first three minutes, followed by a second in the 72nd minute, Australia was in control for most of the match.

Australia was also able to debut new blood in former AFLW star Jenna McCormack, who slotted into a new role at centre back.

But just like the defensive errors that contributed to a poor showing at the World Cup, captain Kerr was not happy with the way Australia finished the match.

“I thought we were good for about 75 minutes – but the last 15 minutes was not good enough and it is disappointing to concede on a set piece,” she told the ABC immediately after the game.

“Look, we won and we played good for 75 per cent of the game, but that is not good enough for us … that’s what we have to face in the future, and get better on it!

We can good get better at counter-attack and it was a good start but like I said, the last 15 minutes were really disappointing.”

Fresh from finishing her championship runner-up season in the US, Kerr was in the thick of the action early in front of a crowd of more than 20,029 at Bankwest stadium in Sydney.

Australia’s 16 shots on goal doubled that of their counterparts, and included a number of looks from point-blank range.

But the wastefulness left the door open for a Chilean comeback, which was given life when Camila Saez nodded home in the waning moments of the match.

The home side dominated from the kickoff, with Kerr driving home in just the third minute after Chile failed to clear a swinging Emily Van Egmond free kick.

The ball bounced up off Kerr’s thigh, and the Europe-bound striker fired into the bottom right corner past a helpless Christiane Endler.

She put one on a platter that Clare Polkinghorne fluffed inside the six-yard box, before Kerr had an airswing at a low Ellie Carpenter cross.

Chile weren’t without their chances, and even put the ball in the net in the 13th minute from a Saez volley but was called back for offside.

Their best opportunity came in the 33rd minute when a sweeping movement parlayed into a Daniela Pardo effort from outside the box.

Her long-range shot flew past a diving Lydia Williams and just outside the post.

Playing against a deep Chilean defence, Australia found their groove in the second half but struggled to put away their chances.

Coach Ante Milicic made three changes from the team, outed by Norway at the round-of-16 stage in Paris, including the debut of former Crow McCormick.

McCormack, who is now playing for W-League team Melbourne Victory, said she was quite emotional making her Matildas debut and was pleased with her first match.

“It was pretty incredible. I’m still wanting to be out there, actually. I’m getting the goosebumps just thinking about it and having to take deep breaths and really just soak in the moment,” she told the ABC.

“I worked really hard to get here and I am just very, very proud and very appreciative of the girls and young able to share it with them and having my family here as well.

Game two in the series against Chile will be played in Adelaide on Tuesday.