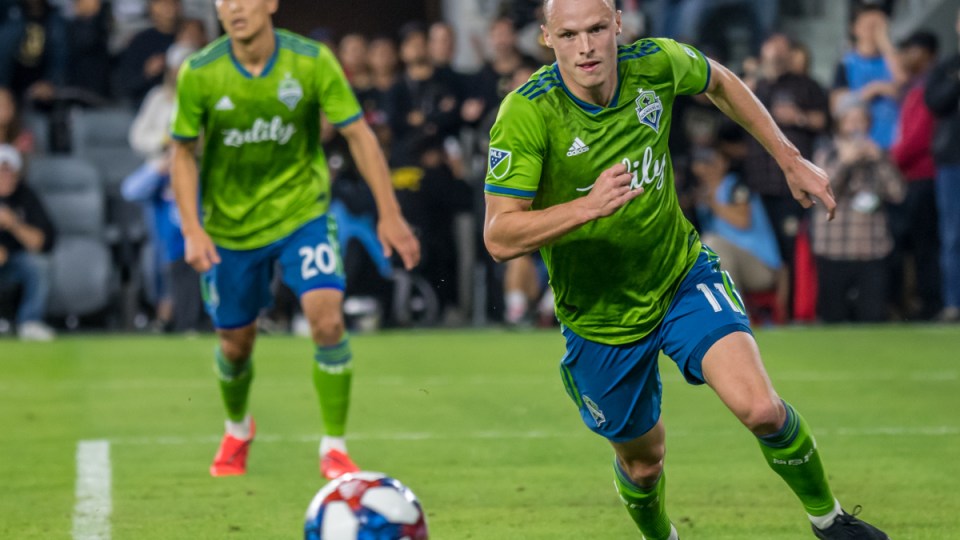 Seattle Sounders defender Brad Smith won’t have long to savour the moment, should he help his side lift the MLS Cup on Sunday afternoon (US time).

Smith and his Seattle teammates booked their place in the MLS Cup final with a monumental, come-from-behind win over heavily favoured Los Angeles FC.  They shrugged off a 1-0 deficit and 22,099 screaming LAFC fans to run out 3-1 winners and secure a berth in the MLS-season decider for the third time in four seasons.

The good news kept coming for the 25-year-old on Saturday morning when he was named as a member of Socceroos coach Graham Arnold’s 24-player squad that will take on Jordan in a World Cup qualifier at King Abdullah II Stadium in Amman, Jordan on Thursday evening (local time).

For Smith, however, the call-up presents a dilemma.

Set to face off with Toronto FC in what will be a sold-out CenturyLink Field on Sunday afternoon, Smith is expected to arrive in the Middle East to link up with his Australian teammates on Monday; meaning there will be barely a second to waste between the final whistle and a dash to the airport for the defender.

FINAL. For the third time in four years, the Seattle Sounders have won the Western Conference!

With national team duty beckoning, there will certainly be no possibility of a champagne – or beer – bath to celebrate should Smith and his teammates lift their first MLS Cup since 2014.

“He will arrive Monday lunchtime to Monday afternoon. [It’s] exactly like a lot of the other players,” Socceroos Head Coach Graham Arnold told Australian journalists ahead of the Socceroos squad announcement.

“Fortunately, he kicks off in the US at midday and we’ve got him on a 6.30 flight to get him across to Jordan.

“We’ve spoken to him, he can’t wait and he did exceptionally well in the Chinese Taipei game.

“We’re proud of him that he’s in the final and we’re wishing him all the best.”

Smith started his first game for Australia in over two years when he played 90 minutes against Chinese Taipei in October; helping to propel Arnold’s side to a comfortable 7-1 triumph and a continued, undefeated start to 2022 World Cup qualifying.

In starting, the Sydney-born lefty broke teammate Aziz Behich’s run of 21-straight starts for the Socceroos – the longest of any Australian player since legendary work-horse Alex Tobin was running around in Green and Gold

Brad Smith starts for the @Socceroos.

His inclusion ends Aziz Behich’s run of 21-consecutive starts for the Socceroos — the most of any player since Alex Tobin in 1999. 🇦🇺

A favourite of former Socceroos Head Coach Ange Postecoglou, Smith broke into senior football with Liverpool before making the move across the Premier League to Bournemouth.

At one time he was a source of derision amongst fans of Australia due to seemingly playing more often for his national side than for his club.

However, a loan move from England to the Pacific Northwest, one that was extended back in July to last through to the end of the 2019 MLS season, has served to reinvigorate Smith’s career.

The career-best form he finds himself in on the American west coast has forced those in his native land to sit up and take notice – not just of his own play but also the possibilities that the MLS offers to Australian players.

“I watch MLS, [it’s] at a perfect kick-off time during the day back here, at 10 or 11 o’clock in the morning,” Arnold said when asked about the league.

“The league, the standard is growing and growing. The crowds are fantastic and Brad Smith has shown you, and probably a lot of Australian boys, the pathway to the US.

“They’ve got great training facilities, they’ve got everything that you need. Culturally, it’s very similar to Australia. It is another good avenue for Australian players to go.”

Smith addition to Socceroos squad a sign of the times