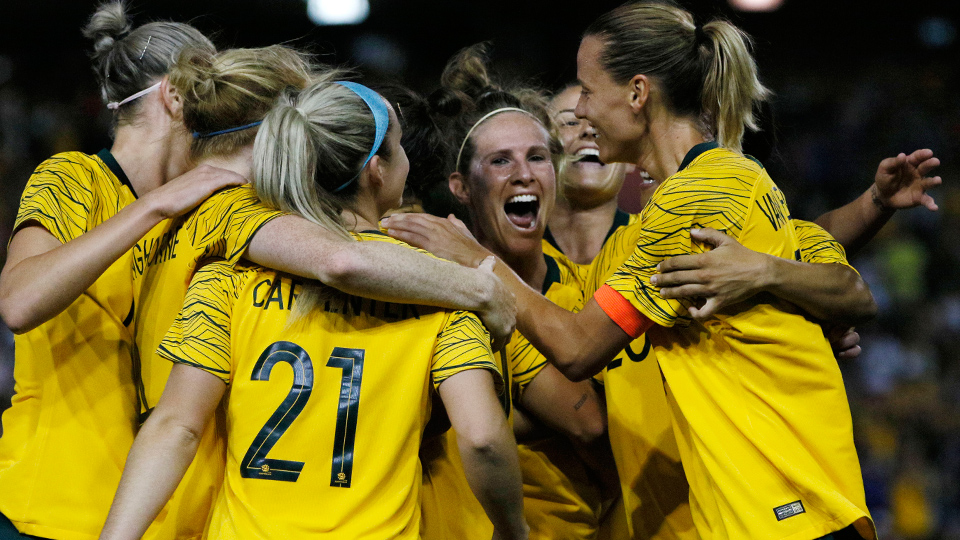 The Matildas have reason to celebrate as construction of their new base begins. Photo: AAP

Matildas stalwart Elise Kellond-Knight is hailing the FFA’s landmark Collective Bargaining Agreement that closes the pay gap between the country’s men’s and women’s national teams as a life changer for the next generation of soccer stars.

FFA and the Professional Footballers Australia detailed the new four-year deal on Wednesday, announcing that the Socceroos and Matildas will receive a 24 per cent share of national team-generated revenues in 2019-20, rising by one per cent each year.

Significantly for the Matildas, a new three-tiered centralised contract system will see Australia’s premier women’s footballers provided with increased annual salary from around $66,000 to $100,000 before they even lace up a boot.

The Matildas will also receive the same access to off-field benefits such as business-class flights, training facilities and specialist performance support staff as the Socceroos are afforded.

“As a female footballer, it’s kind of what we’ve always dreamed of. We’ve always wanted to be treated equal.

“We want to be able to step out on to that pitch with equal opportunity and with equal facilities that men have been exposed to.

“So as a player, the new CBA shows signs of respect. No we’re going to be completely included.

“Having these facilities that the men have is going to set us up for success.”

Well done all 👏 @TheMatildas @Socceroos @thepfa @FFA a step long in the making. @TheMatildas strike of 2015 an important step when the players drew a line. PFA then released ‘60 for 60’ strategy for women’s football similar to ‘APL: For the Fans’. Always pushing, believing ⭐️ https://t.co/KEy1GdNhht

Kellond-Knight and FFA boss David Gallop hoped the new revenue-sharing incentive would inspire a whole new generation of young players to take up soccer in Australia.

“I’m towards the end of my career now – I’m 29 – but for me the big winners are this younger generation,” Kellond-Knight said.

“They’re looking at this new deal and thinking ‘wow, I can make a go of it’.

“When I was their age, when I was up and coming at 12, 14, I didn’t know who the Matildas were. Now we’re renowned, now there’s going to be an established professional career path for them and it’s just going to attract more females to the game.”

Gallop said it was important to acknowledge the Socceroos, led by captain Mark Milligan, for choosing to help drive the new CBA changes and supporting the women.

Milligan felt compelled to back the pay parity push after being blown away by the Matildas while taking his three children to this year’s women’s World Cup in France.

“It’s been clear for everybody to see how much it’s (women’s football) grown over the last few years, and especially how well our Matildas have been doing,” he said.

“I’d only really heard and read about the successes they were having, and to be able to go across and witness it first-hand was extraordinary.

“The timing for me probably couldn’t have been better, because it really drove home how important it was during these negotiations that they got what they deserved.

“Going forward, what a value they are to the Australian footballing community.”

Gallop said Wednesday’s advancement was another step towards making football the biggest sport in Australia.

“Day one in this job I said in decades to come, this will be the No.1 sport in the country. It is decades away but it is coming,” he said.

“It’s in a very competitive landscape but it has things going for it from the grassroots to the Socceroos and Matildas which no other sport can match.”