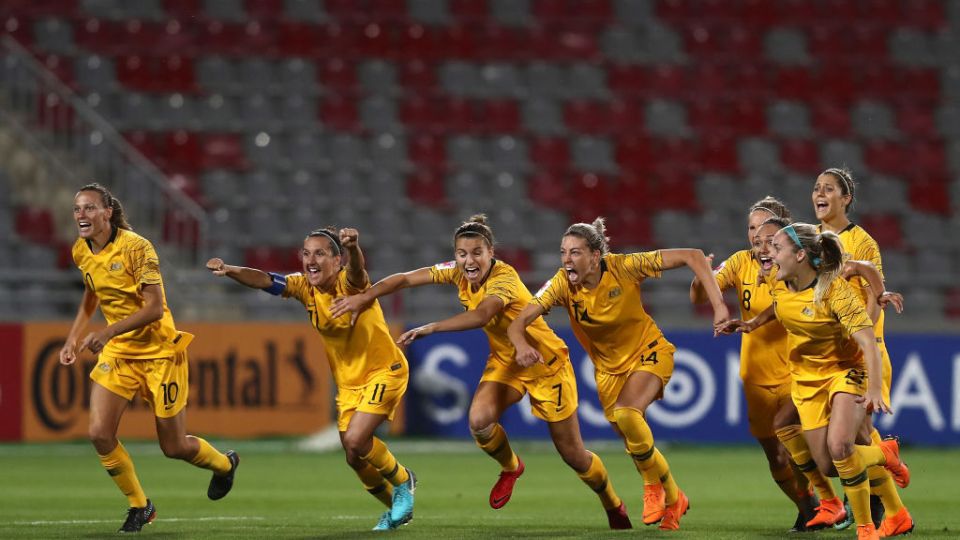 The Matildas are setting off on the road to the 2020 Olympics in Tokyo. Photo: Getty

It will be a familiar-looking squad that takes the field this Saturday for the first time since the World Cup but, for the Matildas, the coming months represent the opening stages of a new journey.

The fixtures represent the first step on the Matildas’ road to the 2020 Olympics in Tokyo.

Eighteen of the 21 players selected by head coach Ante Miličić for the two matches were part of the squad bundled out of the World Cup in the Round of 16 after being defeated by Norway in a penalty shootout.

Though the growth of women’s football in Australia has been incredible in recent years – a testament to the efforts of those that fought so long for it to receive the attention it deserves – the relatively early elimination  served as a reminder of the Matildas place in the global pecking order.

With the current squad still comprising a ‘golden generation’ of players, the pressure is now on administrators to ensure that their skills, marketability and innate ability to generate goodwill are leveraged to build a legacy for the female game in Australia.

Nations around the globe are investing in women’s football programs at hitherto unseen levels and that faith is beginning to bear fruit. The gulfs in club football, both in terms of facilities and skill, is increasing around the world and the benefits are clear.

At the forefront of this push is traditional footballing power Europe.
Of the last eight sides remaining at the World Cup, seven hailed from the continent; only women’s football powerhouse the United States – possessing the strong NWSL and well-established high school and collegiate system – stood against the tide.

Following the World Cup’s conclusion, it was declared that Australia’s best players needed to make their way to Europe and sharpen themselves.

The response was instantaneous.

What a way to score your first Champions League goal!

Long anticipated to be a matter of when, not if, Sam Kerr has recently informed her US club side Chicago Red Stars that she is to sign with a club in Europe – a move that will also see her summers in the W-League come to an end.

She is in is a position previously unheard of for an Australian footballer; able to walk into almost any club in the world and be an instant starter.

English powers Chelsea have been widely touted as a possible landing spot for the 26-year-old, while French powers Olympique Lyonnais and Paris Saint Germain are other possible destinations.

Any other Matildas making the move will also be the beneficiaries of a national team contract unique amongst their peers.

As part of a newly agreed collective bargaining agreement between themselves and the FFA, Matildas and Socceroos team players have both consented to receive the same percentage cut of revenues generated.

At the time of writing, the nuances of the deal, particularly around prize money were unknown.

For a national side long made up of players that have been at the forefront of a push for greater recognition and respect for women not just in football, but in sport, it is another landmark achievement – one for which credit must also be given to the FFA and the PFA.

Now, with a moment of triumph off the field secured, Matildas players will this Saturday begin preparations for Tokyo 2020.

The most notable absence from the squad is 34-year-old attacker De Vanna.

Miličić has insisted that the proven veteran remains in his plans, telling journalists following the squad’s announcement that “the thing with Lisa is that I know fully what she offers the team on and off the park, so I’ll continue to monitor her moving forward.”

Nonetheless, the esteem that De Vanna holds amongst members of the women’s footballing fraternity is without question; her absence has already sparked anger from figures such as Canberra United coach Heather Garriock, and her status in the squad is sure to remain much scrutinised in the future.

De Vanna is unlikely to be headed to the 2023 World Cup regardless of the result in Tokyo. The likes of young attacking Mary Fowler are and a returning Kyah Simon are also going to require integration into the squad.

Could Miličić, who will take up the role of head coach at A-League expansion side Macarthur Bulls following the Olympics, decide he has nothing to lose if he is the one that calls time on De Vanna’s international career?

Matildas set off on a new voyage