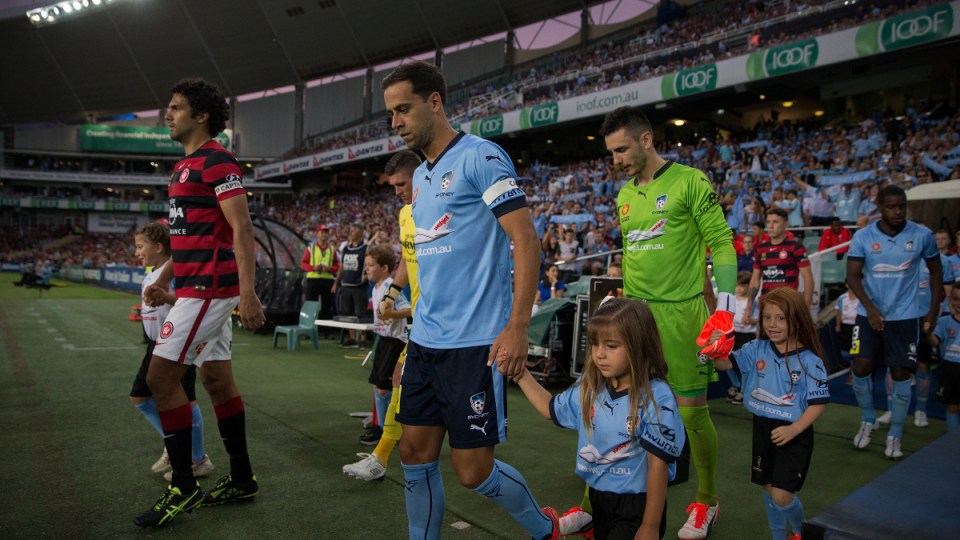 The teams walk out onto the field before the Sydney derby. Photo: Getty

Western Sydney Wanderers 1-0 win over Sydney FC in Saturday’s Sydney Derby was a rare, unabashed success for the A-League.

The first of its kind at ‘The New Wanderland’ – Parramatta’s Bankwest Stadium – 28,519 fans packed themselves into the steep grandstands that tower over the immaculate playing surface and created an atmosphere worthy of the hype that  preceded it.

Before the game started, those watching at home would have been forgiven for assuming that broadcasters Fox Sports may have been battling gremlins with their audio equipment; it was difficult to make out what the pre-game panel was saying over the pre-game cacophony.

Marvellously, the Red and Black Bloc of Wanderers fans and The Cove of Sydney FC fans then took it up a notch; engaging in a pitched battle of chanting and singing as they attempted to will their sides onwards to victory over the game’s 90 minutes.

The involvement of Daniel Georgievski and Mitch Duke in the creation of the Wanderers’ victory added further romance. Georgievski was born in the western Sydney suburb of Blacktown and Duke just down the M7 in Liverpool.

The phrase ‘peak A-League’ is affectionately thrown around on social media to refer to moments such as Kosta Barbarouses being boosted to fix a broken goal net with tape, or Central Coast Mariners’ BBQ sauce mascot giving a double-barrelled, one-finger salute to opposition fans.

Saturday night was perhaps a hint of what peak A-League actually is.

The passion, noise and visuals on display were a stark reminder of the electricity and romance that football can provide when it gets it right.

The game was played in a stadium impeccably suited to hosting football and in front of two zealous fan bases truly engaged with their teams, in the process uniting fans, clubs, administrators, security and police, who were all pulling in a common direction,

Saturday night was a tantalising glimpse of what the A-League can be.

But now, with memories of the Sydney derby still lingering, the A-League segues into another Saturday night derby – one whose implications are vastly different.

This Saturday night, Western United – having gone down 2-1 in their first derby against Melbourne City at Kardinia Park – will have their first encounter with the big dog in the yard, Melbourne Victory.

Though in no way fair, or even beneficial, for a game featuring an expansion side competing in just their fourth game, comparisons with a Sydney derby played in the same time slot a week prior will be inescapable.

It seemed like every bidder for one of two A-League licences on offer last year asserted they could bring a ‘Wanderers-type impact to the A-League’.

Contrasts between Melbourne’s green and black side and Sydney’s red and black one are unavoidable.

Casting themselves as representatives of Victoria’s west – audaciously declaring they will control ‘west of the Westgate’ – United undoubtedly brings a geographic backdrop that can play into the creation of a heated rivalry.

Though Sydney FC fans may bristle at suggestions they represent just the east, there is undeniable power in the narrative around the Wanderers of the west and the Harboursiders of the east – a plot point that has helped turn it into the best derby in Australian football.

With Melbourne City lacking the geographic, cultural or attitudinal contrasts that can foster a true, for lack of a better phrase, blood feud on the part of both clubs, United has a unique chance to tiptoe in and establish themselves as Victory’s biggest rivals.

A necessary part of that will involve success on the field; Sydney FC fans would be unlikely to loathe Wanderers to the degree they do had their rivals not won an Asian Champions League and played in three grand finals during their burgeoning years.

Yet, more crucially, it will also involve Western United attracting a fan base that truly encapsulates and represents their club – support that doesn’t take its lead from the club but, instead, comes to define it.

This task is easier said than done.

In giving themselves such a large catchment area, United have taken it upon themselves to represent not just western Melbourne but also regions such as Geelong and Ballarat and will need to find a way to represent them.

Though their proposed boutique stadium in Tarneit should serve as game-changer should they be able to deliver it in their third year, they will still need to engage enough of the community to fill it.

To do so will involve countless hours by those behind the scenes forging bonds with local communities, reaching out to local clubs and engaging with stakeholders and the media to create a narrative and energy around the club.

Ultimately, Saturday night represents United’s first chance to take a step on a road that could see them establish a great footballing rivalry and major A-League presence.

However, not only must United build it – they must also give them a reason to come.