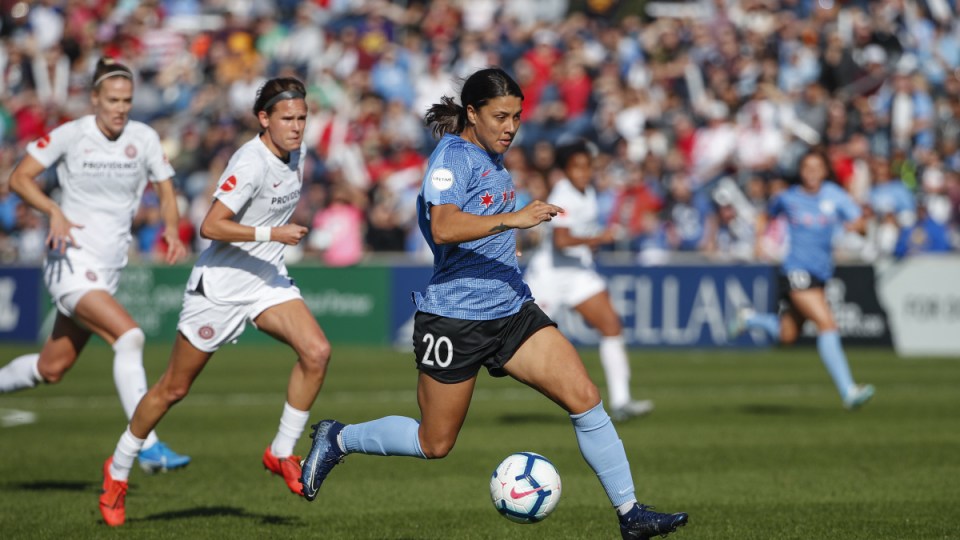 Australian soccer superstar Sam Kerr has been named most valuable player of America’s NWSL on the eve of leading the Chicago Red Stars in the championship game.

Kerr scored a league record 18 goals this season for the Red Stars and knocked in the winner in last weekend’s 1-0 semi-final victory over Portland Thorns FC.

The Australian striker refused to accept the MVP award alone and pointed to her teammates on the Red Stars.

“I don’t do this by myself,” Kerr told reporters.

The 18 goals did not come from one player, so thank you to my teammates.”

The honour is the latest accolade in what has been a phenomenal year for Kerr who picked up the league’s Golden Boot award last week and led the Matildas at the World Cup.

The Red Stars, who also feature Australian goalkeeper Mackenzie Arnold, will be the underdogs in the final played in front of a hostile crowd in Cary, North Carolina.

The Courage are loaded with talent, including MVP runner-up and Brazilian midfielder Debinha and goal-scoring tandem Kristen Hamilton and Lynn Williams.

The Red Stars have their own deadly duo with Kerr and Japan’s Yuki Nagasato a handful for any opponent.

“Last week there was a lot of talk about a semi-final curse, but I think now the pressure is off and we will go out there and play with excitement and see where it takes us,” Mackenzie said.

The Courage finished the regular season on top of the table with 15 wins, five losses and four draws while the Red Stars were second with 14 wins, eight losses and two draws.