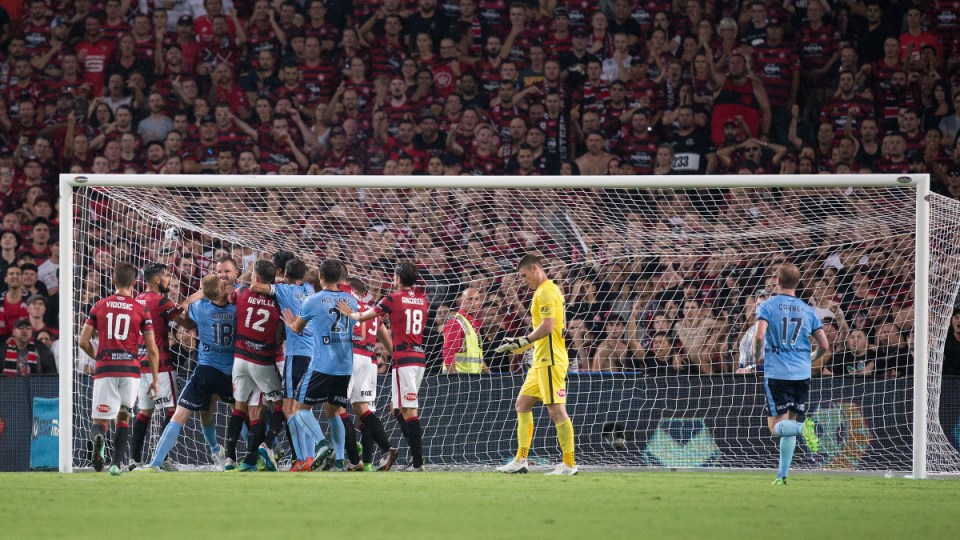 You can't beat a derby for the passion and intensity. Photo: Getty

“The point is, ladies and gentlemen, that hatred – for lack of a better word – is good. Hatred is right. Hatred works. Hated clarifies, cuts through and captures the essence of the evolutionary spirit.”

With a slight modification, the ode to greed delivered by Gordon Gekko in the 1987 film Wall Street carries with it a message that can be easily extrapolated to football.

Meetings between two sides that share a home carry with them a mystique like no other; attracting fans, media and television audiences in droves as two familiar foes engage in a battle for local supremacy.

Identities are shaped in the terraces of derby games, where fans are unite by their common disdain for rivals in contests that, on occasion, can take on more importance than the campaign as a whole.

“The derby gives me a sense of purpose, something to fight for,” Western Sydney Wanderers fan Christina Trajceska explained to The New Daily.

“Whether it be the three points to get us up the table and shove it in our rivals’ faces or that pride I have for my city and my roots, it’s something that gets me excited and up in the morning.”

When at their peak, derbies transcend the football field and become something more; 22 players becoming avatars of a wider community that has rallied around them as an extension of themselves.

While their original causes may have fallen away as the globalisation of football took effect, legacies of Catholic Celtic against Protestant Rangers in the Glasgow derby, proletariat Boca Juniors against
bourgeoisie River Plate in Argentina’s Superclásico or establishment Persepolis against working-class Esteghal in the Tehran derby live on.

That passion, though, has been harder to capture in the A-League.

While Melbourne City and Melbourne Victory are competitive, there is no clear social or geographical divide to truly differentiate the two, and the fierce Newcastle Jets and Central Coast Mariners battles struggle to capture the imagination of the nation.

The emerging battle lines in the Sydney derby are a little clearer.

“It ties into Sydney FC’s identity so much nowadays.

“Being the team the Wanderers could never beat is almost as big a source of pride for us as supporters as any trophy wins; during their best seasons, they still struggled and often dropped points to us.

“Football rivalries are so much heavier than that of any other sport. We’re becoming more of a football city, thanks to the derby.”

A foundation club, four-time champions Sydney FC was always the glamour side of the A-League.

In 2012, Italian and Juventus legend Alessandro Del Piero would sign for the club.

“It goes back to that stereotypical divide between of East v West, Bling FC v the Community Club, the upper class v working class,” Trajceska, a contributor to The Ladies League said.

“It gives off such a rush, to want to prove everyone wrong and prove you do deserve to be here and you are just as good.

“Hatred between two people can be a very damaging thing, but in football, it’s needed. It keeps the game in this country alive, growing and interesting.

“You need a healthy mix of banter but, most importantly, rivalry.”

An expansion side, Western Sydney entered the A-League in 2012-13 and hit the ground running.

Wearing a contrasting red and black to Sydney’s sky blue, Wanderers have affected a gritty, multicultural and working-class ethos while tasting early success.

Reaching – and losing – three grand finals in their first four years in the competition, the Wanderers’ grandest achievement arrived in 2013-14 when they lifted the Asian Champions League.

Loud and passionate, the Wanderers fan base grew quickly and, despite their frequent clashes with authorities, won plaudits around the country for the dynamic they brought to the league.

“I love to hate Wanderers because every good story needs a good villain,” said Dunkin, who runs Sydney FC blog All Sides of the Harbour.

“I hate the fact they stopped our incredible “Invincibles” season in 16-17. I hate the constant bragging about their Champions League victory and living in the past, and I hate that as supporters they’re so often talked up as some of the best.

“The various dramas over the years from the Red & Black Bloc and some of the treatment of Sydney supporters, too.

“For better or worse, everything adds up to the big soap opera that the derby – and football as a whole – is.

“You need a bit of friendly “hate” in you to balance life out; a life without a club you hate and despise makes you just a placid viewer, which isn’t how to experience football.”

Haters gonna hate: Derbies are unrivalled for their passion