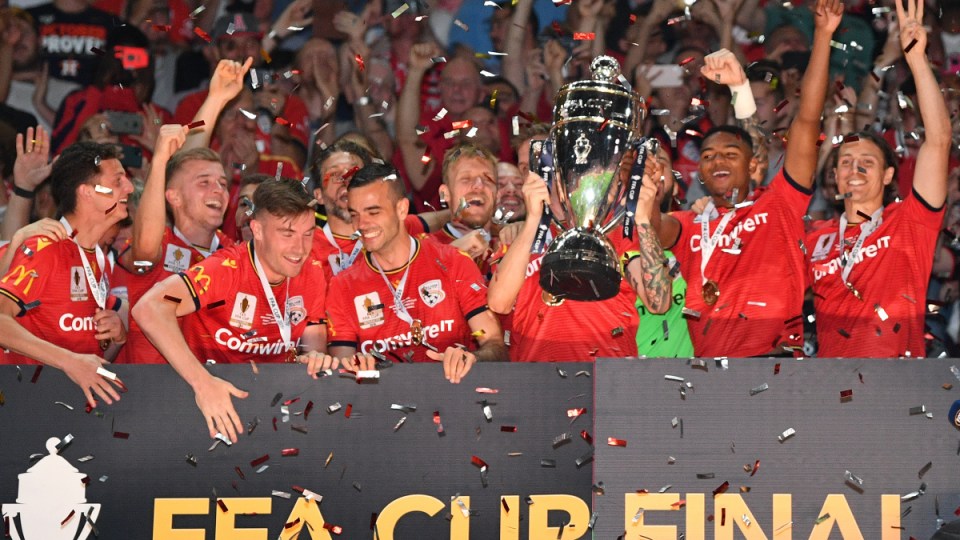 Audacious attacker Al Hassan Toure has inspired Adelaide United to a 4-0 rout of Melbourne City to win the FFA Cup.

The teenager scored the first goal and helped set-up the second in Wednesday night’s cup final at Adelaide’s Coopers Stadium.

Toure, a Guinea-born forward who migrated to Australia with parents as a five-year-old, was the game-breaker.

Relive all the highlights from a cracking #FFACupFinal in Adelaide!

The 19-year-old, draped in the flag of his parents’ native Liberia, collected the Mark Viduka Medal as best afield.

Toure produced two moments of magic before receiving a standing ovation from the 14,920-strong crowd when substituted 20 minutes from full-time.

Toure, who only made his senior debut for Adelaide in August, netted his fifth goal of the cup campaign.

He also scored on his A-League debut 12 days ago.

If I was playing this good, I'd be crying too. What a moment‼️ 👏 #FFACupFinal

Toure pounced on an insightful lifted through ball from teammate Ryan Strain in the 25th minute.

Strain, a metre inside his own half, played the strongly-built forward into space and Toure instinctively blasted a right-footed shot that surprised City goalkeeper Dean Bouzanis.

Toure was on such a wide, tight angle that Bouzanis was anticipating a cross – instead, the youngster beat the ‘keeper at his near post.

The goal turned the tide of the final, which until then had been flowing City’s way.

Here are your champions‼️ The biggest win in an #FFACupFinal AND the only team to win back-to-back 👏 pic.twitter.com/bbK9y5ShUt

The visitors quickly settled and, just seven minutes in, red-hot striker Jamie Maclaren missed the mark with a close-range header.

After winning a show of strength with imposing City defender Harrison Delbridge just inside halfway, he produced a visionary pass that played McGree into space.

McGree charged towards goal and, with a deft cutback, found Halloran who had no trouble beating Bouzanis from seven metres.

McGree and Halloran also featured in Adelaide’s third goal in the 60th minute.

The former passed wide to the latter, who aimed a low cross into the danger zone which slid past a pack including Bouzanis and Mileusnic tapped in at the back post.

Just 15 minutes later, McGree swivelled and scored with a left-footer from 10 metres out to tip Adelaide’s celebrations into overdrive.