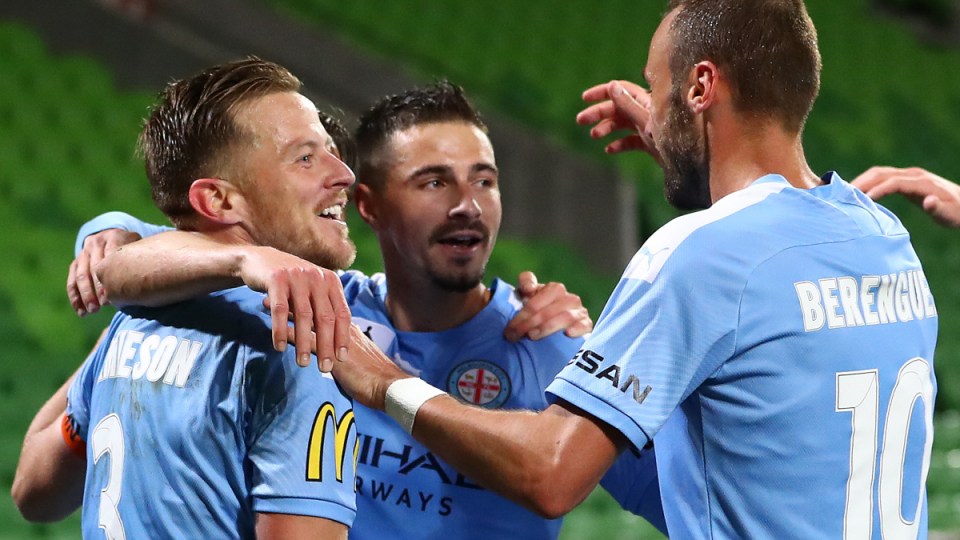 City plays Adelaide United at Coopers Stadium in the South Australian capital in the final of the popular knockout competition, which is open to any Australian club side.

The 26-year-old Maclaren, who scored a hat-trick for Australia against Taiwan in the recent World Cup qualifiers, is yet to win any silverware in Australia in the A-League or the FFA Cup.

But he is determined to correct that situation, particularly as he was a substitute in Perth Glory’s 2014 final loss to Adelaide United.

And with six goals so far in this FFA Cup campaign, Maclaren is ready to stamp his mark on the contest.

“(I’m) hungry as ever,” Maclaren said. “I’ve been on the receiving end of a cup final before and I’ve lost and it was away in Adelaide.

“So this time, a bit of redemption for me.

“We’ll go there and this club’s won it before (2016) and I want to bring another trophy to this club.

“That’s why I came to this club, to get silverware, and Wednesday it starts.”

Maclaren is in rare form, having added to his hat-trick with another goal off the bench against Taiwan and backed that up days later with a double against the Reds on Sunday.

“When you’re in this sort of rich vein of form you do enjoy the moments,” he said.

“But I’ve got to keep getting in these positions because my teammates –whether it’s Socceroos or this team Melbourne City – they’ll always create chances for me and I have to be the man that’s always on my toes.

“It’s not easy. It’s a tough place to go to and we’ve obviously got knocked out by them last year in the finals series,” Maclaren said.

“We’ll just go there and play our game. We’re a whole new team, a whole new style and, whether we’re at home or away, we’ll play our style and be on the front foot and really attack them.”

Adelaide United coach Gertjan Verbeek said his side would adopt similar attack-minded tactics, but he he still has some player puzzles to solve.

The Reds, seeking consecutive cups and a third title since the tournament’s inception in 2014, have ruled out attacker George Blackwood (hip), midfielder Mirko Boland (hamstring) and defender Jordan Elsey (knee).

City counterpart Erick Mombaerts said he might have a surprise in store for the Reds.

“I’m not sure they want to change … but maybe we try also to surprise them with some new pattern of play or new tactics,” Mombaerts said.

The Frenchman said Sunday’s Round 2 A-League win was a confidence boost for his players but warned improvement was required.

“I hope we can have the same result, but I think that we have to play better if we want to win again,” he said.

“It is better for the players to win to increase the confidence, yes, but … we weren’t very happy – happy to win, but about the style we want to set up, not so happy.

“We need to better control the game the whole time in 90 minutes, or maybe even more.”

⚠️ The squads for tomorrow's #FFACupFinal have been announced – and there's a key absence for @AdelaideUnited.#MagicOfTheCup 🏆https://t.co/0HcAzo9gTM

“It’s a final, so we we need to go in and give everything.,” Jakobsen said.

“It’s not the same as last weekend. You can’t really use that game too much.