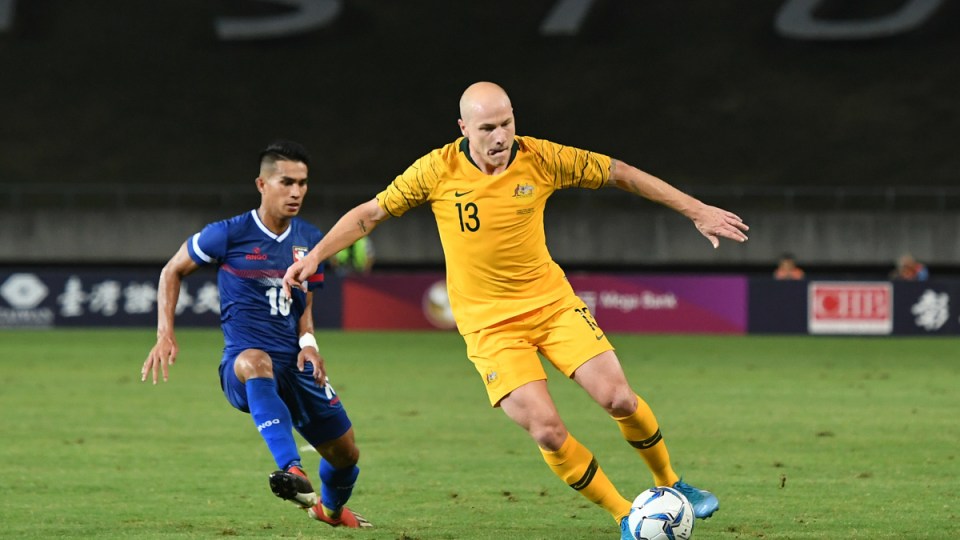 The class of Socceroos playmaker Aaron Mooy was again on show against Chinese Taipei on Tuesday. Photo: Getty

But it wasn’t all one-way traffic for the Australians, which featured six changes from the side that started in the 5-0 win over Nepal in Canberra last Thursday.

The in-form Taggart, who plays for Suwon Samsung Bluewings in South Korea’s K-League, scored his first international goal in six years with a 12th-minute diving header from a pinpoint Rhyan Grant cross.

He swiftly made it two in a matter of minutes by tucking away Brad Smith’s cutback from close range following a lovely move down the left hand side in the 19th minute.

The Brighton and Hove Albion keeper was captaining his nation – in the absence of the rested Mark Milligan – for the first time in his 58th appearance.

But Hull City midfielder Irvine calmed the nerves by restoring Australia’s two-goal buffer in the space of two first-half minutes.

The big defender grabs a brace against Chinese Taipei.

Mustafa Amini replaced Mooy and Ajdin Hrustic came on for Brandon Borrello in the second half as Chinese Taipei held firm, but the hosts’ resistance was broken when Souttar headed home Hrustic’s free kick with 15 minutes remaining.

Jamie Maclaren – who scored a hat-trick against Nepal – netted within five minutes of replacing Taggart, applying a confident finish on the angle after Hrustic had set up the Melbourne City striker.

And Hrustic, who is making his mark at FC Groningen in the Dutch Eredivisie, claimed a hat-trick of assists when Souttar powered in another header – his third of the week – to seal the comprehensive win.

Taggart said the scoreline was a deserved reward for the team’s hard work on a warm night.

“It was a good performance all round. We dominated the game. Chinese Taipei set up very defensively and it was tough to break down,” Taggart told Fox Sports.

The win to maintain Australia’s perfect qualification record for Qatar 2022 would have pleased coach Graham Arnold.

It left Australia five points clear of Kuwait and Jordan at the top of the Group B qualifying group after three matches.

The Socceroos also enjoy a substantial advantage in goal difference before they play Jordan at Amman on November 14.