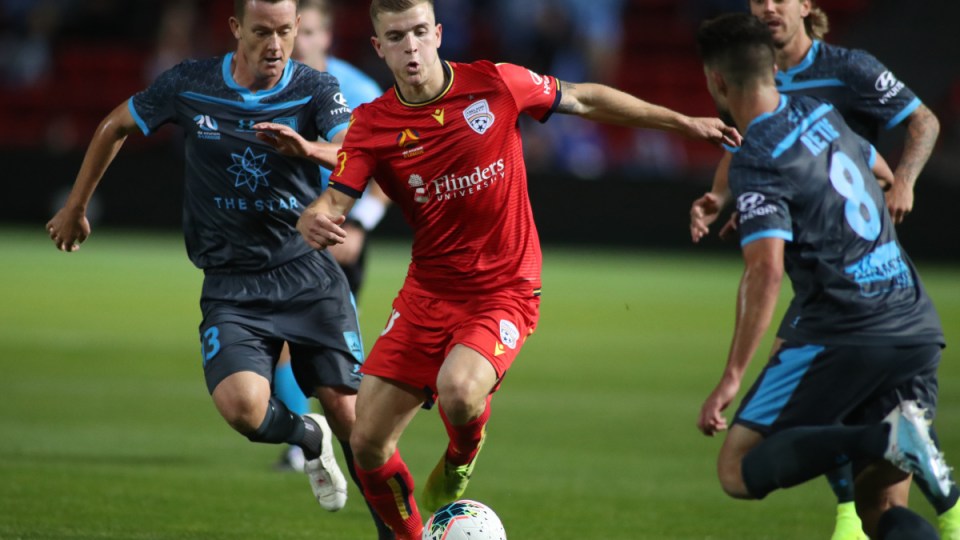 A late header from Ryan McGowan has delivered Sydney FC a 3-2 win against Adelaide United in a rollicking A-League season opener.

McGowan nailed a free header in the 87th minute to settle a feisty Friday night encounter at Adelaide’s Coopers Stadium.

And just as the fizz appeared to be dwindling, South Australian-born McGowan produced the decisive moment of his first A-League game.

Unmarked from a Brandon O’Neill corner, McGowan floated to five metres from goal and sweetly hammered a header.

The season opener also included a straight red card to Adelaide’s Ryan Strain, who was marched for felling Le Fondre in a second-half sprint towards goal.

Barbarouses thought he’d delivered for his new club when he slotted past Adelaide goalkeeper Paul Izzo in the 60th minute.

But a VAR review found the New Zealander offside and the goal was disallowed.

In another narrow call, Toure was ruled onside when his teammate Riley McGree played an audacious lifted pass which paved the path to goal.

Just 20 minutes in, referee Alex King halted play for a VAR check – he watched replays of a Le Fondre clip brush an arm of Adelaide captain Michael Jakobsen inside the area, and awarded a penalty.

Le Fondre supplied Milos Ninkovic, who played Alex Baumjohann into space and the German’s cut-back across the goal-face precisely found Le Fondre for a tap-in.

Adelaide answered just before halftime when Sydney’s Baumjohann tangled with Ryan Kitto and the Reds were given a free kick some 20 metres out.

A-League season kicks off with win to Sydney FC