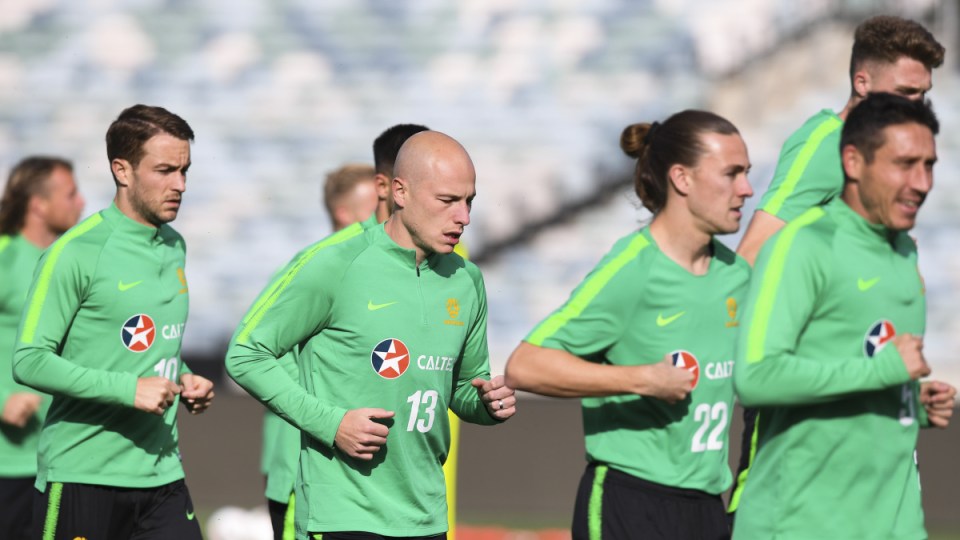 Aaron Mooy prepares for the World Cup qualifier against Nepal with Socceroos teammates in Canberra on Wednesday. Photo: AAP

The Socceroos return to Australia on Thursday night for the first time since November when they host Asian minnows Nepal in Canberra, before jetting off to Kaohsiung for a clash with Taiwan next week.

After starting their long journey to the 2022 World Cup with a comfortable 3-0 win over Kuwait, head coach Graham Arnold has named a largely unchanged group.

“I’ve changed the way that we play a little bit with the Socceroos to help those boys [Australia’s strikers] more, with our wingers more inside,” Arnold told Fox Sports before the meeting with Nepal.

I really expect these boys to start stepping up now and I don’t think we’ll be talking about the lack of goals for too much longer.”

While the Socceroos have, on occasion, made a habit of slipping on banana peels, comfortable wins against Nepalese and Taiwanese sides that are ranked 161 and 129 in the world should be the expectation for Arnold’s group.

With the A-League not recognising international breaks for the 2019-20 campaign, some clubs were at the mercy of Arnold when it came to the presence of some of their best players for the first round of matches in the domestic competition.

Only Sydney FC (goalkeeper Andrew Redmayne and defender Rhyan Grant) and Melbourne City (striker Jamie Maclaren) will be missing for their clubs.

Sydney FC – champions a season ago – should be able to cover the duo’s absence before a season in which they are expected to challenge for premiership and championship honours.

The Sky Blues have recruited impressively in their quest for back-to-back successes under second-year head coach Steve Corica.

Joining a side that, despite the retirement of Alex Brosque, retains proven A-League performers Grant, Redmayne, Miloš Ninković, Brandon O’Neill and Adam le Fondre means that the road to A-League glory in 2019-20 will likely run through Moore Park.

Looking to forget the 6-1 shellacking suffered at the hands of Sydney, the Harboursiders’ eternal rivals Melbourne Victory has experienced one of the most sweeping overhauls in their club’s history.

Tantalisingly, in Ola Toivonen – arguably the best player in the A-League – Kruse and Nabbout; Kurz possesses a front three that all started at the 2018 World Cup in Russia.

It is a stark contrast to the dearth of firepower the German had at his disposal in his time in the City of Churches.

Sydney and Victory’s crosstown foes will likewise be looking to the new season with a renewed sense of vigour.

Led by Socceroo Mitch Duke and former Bundesliga top scorer ‘Fußballgott’ Alexander Meier, hopes are high that the Red and Black can reach the heights that marked their first seasons in the A-League and augur the return of one of the loudest and most entertaining live experiences in all of Australian sports.

Discarding Warren Joyce in favour of Erick Mombaerts, Melbourne City has made a fine start to the season already; winning its way through to the final of the FFA Cup.

With returning building blocks Maclaren, Harrison Delbridge and Scott Jamieson joined by new signings Craig Noone and Josh Brilliante and some of the best young talent in Australia, City can perhaps dare to dream of bigger things.

The long-standing club goal of a place in the Asian Champions League (ACL) is a real possibility.

Of course, both Victory and City must deal with another dog on the Melbourne block.

Entering the A-League for the first time in 2019-20, expansion side Western United is looking to stake an immediate claim in Melbourne’s west.

On the field, it should certainly prove capable of competing straight out of the gate.

Though there are questions of pace surrounding what figures to be an ageing spine, United should be in the mix for a finals place at the end of the season.

Looking even further west, defending premiers Perth Glory has reloaded and is seeking to go one better this season after suffering a heartbreaking penalty shootout defeat in front of a record home crowd in last season’s grand final.

Head coach Tony Popovic’s side loses Socceroo Jason Davidson but again has Chris Ikonomidis and Diego Castro in Glory’s quest and, following his acrimonious departure from City, welcomes an A-League legend in the form of Uruguayan striker Bruno Fornaroli to the fold.

But Glory will – for the first time – be forced to contend with Asian Champions League football as well as A-League commitments in the season ahead; adding another dimension to its task of proving last season wasn’t a flash in the pan.

McGree became the first player that the Reds paid a transfer fee for in their history when they paid a reported $150,000 to secure him from Belgian side Club Brugge and bring him back to the side at which he began his professional career in 2016.

Though there hasn’t quite been the fanfare that accompanied their flirtations with Usain Bolt last season, the Mariners have, under former Matildas’ head coach Alen Stajčić, flashed potential in making a run to the semi-finals of the FFA Cup and will be looking to avoid finishing as wooden spooners for the third consecutive season.

If he can stay out of trouble, Korean midfielder Kim Eun-sun figures to be a key player in any Gosford revival.

In Queensland divine intervention has arrived, with a man that was christened ‘God’ by Liverpool fans, English legend Robbie Fowler, taking the reins of the club for the season ahead.

Recruiting a number of players from the lower leagues of England that he is familiar with, Fowler has also brought in former Newcastle Jet Roy O’Donovan to join local talent Dylan Wenzel-Halls in leading the line for the coming campaign.

O’Donovan’s former side enters the season in a state of flux. Operating on a reduced budget, the Jets have already lost marquee signing Wes Hoolahan and attacker Kaine Sheppard to preseason injuries that will keep them out until the new year.

Wellington Phoenix reversed years of mediocrity last year and became feel-good finalists, but new boss Ufuk Talay will be tasked with guiding a youthful Wellington on an even tougher journey.