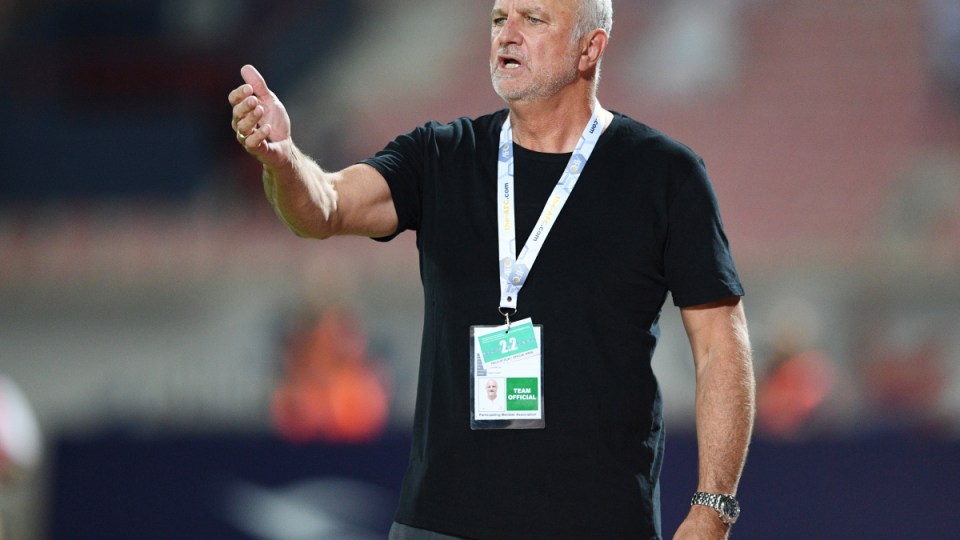 Graham Arnold is pleased with the Olyroos progress. Photo: AAP

Socceroos coach Graham Arnold expects his strikers to fill their boots in next week’s World Cup qualifier against Nepal.

Arnold’s theme for Australia’s Qatar 2022 qualifying is about being ruthless – and that is the attitude he is calling on Jamie Maclaren, Adam Taggart and Apostolos Giannou to bring against the Group B minnows.

Nepal head to Canberra after winning its most recent qualifier against Taiwan but having started the campaign being belted 7-0 by Kuwait.

Australia defeated Kuwait 3-0 in its opening match, with all their goals coming in the first half through a Mathew Leckie double and a classy strike by Aaron Mooy.

Taggart, given the nod ahead of Maclaren, toiled hard in the Kuwait City heat but was unable to score for his country for the first time since 2013.

Maclaren has one goal in 13 appearances for his country while Giannou’s strike-rate of two in 11 is only marginally better.

With Taggart still in good form for South Korean club Suwon Bluewings and Maclaren banging in goals for Melbourne City in the FFA Cup, Arnold’s expectations are high for the visit by Nepal.

The Socceroos coach says after 12 months of passing on his ideas and tactics, it’s time for his players to deliver consistently on the pitch.

“I’ve changed the way that we play a little bit with the Socceroos to help those boys more with our wingers more inside,” Arnold told Fox Sports.

I really expect these boys to start stepping up now and I don’t think we’ll be talking about the lack of goals for too much longer.

Arnold has made just one change to his squad for Thursday’s game with Trent Sainsbury left out due to injury, replaced by Bristol City’s Bailey Wright.

Sydney FC pair Rhyan Grant and Andrew Redmayne as well as Maclaren are the only A-League players in the squad with that competition kicking off next week during the international window.

Despite losing both Grant and Redmayne for their season-opener against Adelaide United next Friday, the Sky Blues said they had opted not to request a postponement of the fixture.

“We understand the importance of this opening round of the Hyundai A-League season and maintaining the momentum of the competition as we enter a new and exciting era, so we’ve chosen not to,” Sydney FC chief executive Danny Townsend said.

“We have a very strong squad at our disposal and Steve (Corica) has immense confidence in any player he choses to come in and do a job for the team in Adelaide.”

Arnold has also hinted he’ll make changes to his squad following the Nepal game before taking on Taiwan in Kaohsiung on October 15.

“We can change as many players as we like after the first game, it’s not that this squad is set in stone for both games.

“At this stage it is but there can be changes.”

Australia’s players will assemble in Canberra on Monday.