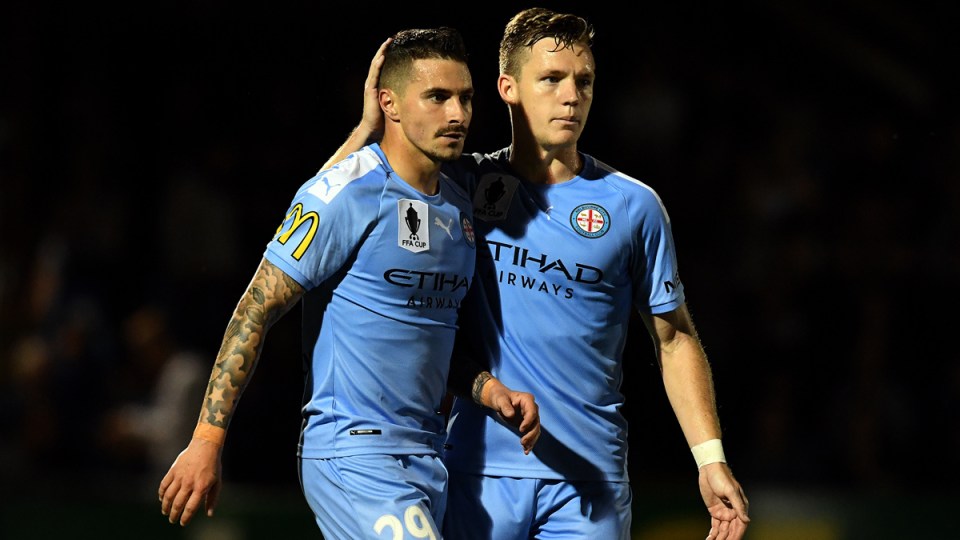 Jamie Maclaren, with Melbourne City teammate Scott Galloway on Tuesday, has been cleared of a serious knee injury. Photo: AAP

Socceroos coach Graham Arnold has received some good news with Jamie Maclaren given the all clear on a knee injury by Melbourne City medical staff.

Maclaren played most of City’s 5-1 FFA Cup semi-final win over Brisbane Strikers on Tuesday despite ongoing soreness following a knock earlier in the week.

Following the match in which Maclaren scored two goals and set up another, City coach Erick Mombaerts said he was unsure if the 26-year-old would be fit to be selected in Australia’s upcoming World Cup qualifiers against Nepal and Taiwan.

After assessing the injury upon the team’s return to Melbourne on Wednesday, Maclaren was given a clean bill of health.

“The knee injury was due to having it caught in a tackle early in the week with mild soreness in training but no damage to the knee,” City said in a statement.

“He had no issue at all during the game and will be fine going forward.”

Arnold will name his 23-man squad on Friday for the matches in Canberra on October 10 and Kaohsiung on October 15.

Maclaren is expected to be one of only a handful of A-League players named in the squad, along with Sydney FC pair Andrew Redmayne and Rhyan Grant.

Melbourne Victory’s Andrew Nabbout will be hoping for a recall after missing out on last month’s 3-0 win in Kuwait, which kickstarted Australia’s journey to the 2022 World Cup in Qatar.

Fellow Victory recruit Robbie Kruse is doubtful, however, due to a hamstring complaint.

Celtic’s Tom Rogic will certainly be overlooked after being granted a leave pass for his impending marriage and to continue his recovery from off-season knee surgery.

Hull City defender Callum Elder was expected to get a call-up but a calf injury looks like it has scuppered his chances of a Socceroos debut.

Star European-based players such as goalkeeper Mathew Ryan and goalscorers from the Kuwait match Aaron Mooy and Mathew Leckie will be selected, but Mooy and Leckie may not start both games as Arnold looks to give his fringe players a chance to shine.

Nepal was thrashed 7-0 by Kuwait in their group opener but rebounded to post a 2-0 win over Taiwan, which is bottom of the group having lost its first two matches.