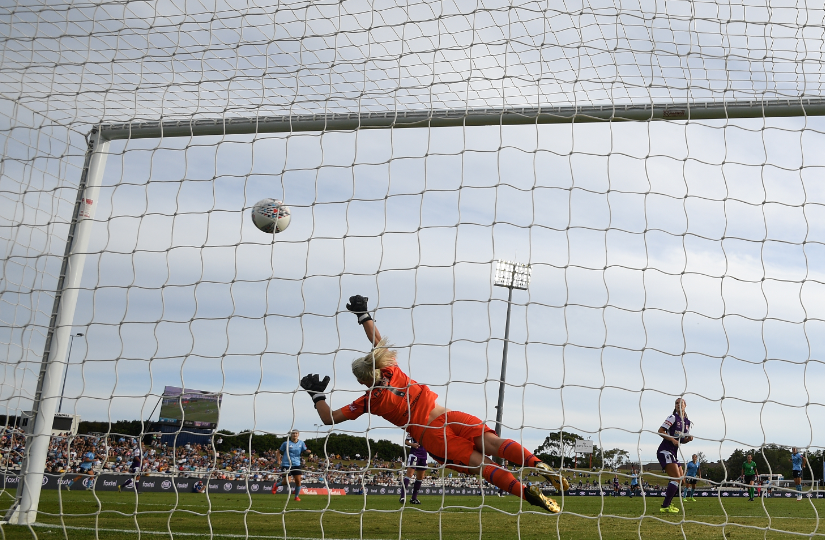 The American imports came up big for Ante Juric’s side, with Savannah McCaskill’s double proving decisive.

Sydney started brightly, and McCaskill had a golden opportunity to open the scoring inside the first two minutes. Young starlet Princess Ibini took on her marker and squared across the six-yard box, but McCaskill could only divert the bouncing ball against the crossbar from point-blank range.

The Sky Blues didn’t have to wait long for their breakthrough. McCaskill, playing in a more central role than usual, dropped off the frontline to pick up Ally Green’s diagonal pass and laid it off the rapidly advancing Sofia Huerta.

The Mexican-American took one touch to steady herself before lashing a vicious strike into the top right corner.

The #WLeagueGF player of the match, @smccaskill_21, thoroughly enjoyed her first season in the @WLeague.

The goal was no more than Sydney deserved, as they went on to dominate the opening 20 minutes, but Kerr soon had Perth level after Sydney failed to properly clear a cross.

Kerr demonstrated her trademark acceleration and quick thinking to beat Danielle Colaprico to the loose ball, and Colaprico – Kerr’s teammate at Chicago in the NWSL – collected the Glory superstar.

Kerr dusted herself off and took the resulting spot kick, which Aubrey Bledsoe got a hand to but couldn’t keep out of the bottom left corner.

After offering little in attack until that point, Perth was back on level terms – and Sydney had a painful reminder of how lethal a momentary lapse can be when Kerr is around.

The game settled into a familiar pattern of Sydney possession and Glory counter attacks, with Kerr testing Bledsoe from range, and Ibini running amok down the left.

Sydney re-established their lead before halftime, with Colaprico intercepting Kim Carroll’s pass into midfield, setting Caitlin Foord away on the right. Foord whipped in a sumptuous early ball to McCaskill, whose crafty header looped over the advancing Eliza Campbell and into the unguarded net.

The service, the one time touch [rapidly chef kisses one hand after the other several times] #WLeagueGF pic.twitter.com/FJIMPtuMMY

Again it was Sydney on top after the interval, with Perth struggling to involve Kerr and Rachel Hill in the game. Huerta – confidence sky-high after her first-half wonder goal – had an effort blocked from even more ambitious range. Ibini cut inside and saw her a curling strike saved, while defender Alanna Kennedy headed narrowly wide from a corner.

The woman of the moment was McCaskill, however, and it was she who added a third on the hour mark. A half-cleared corner was hooked back into the area by Huerta, and Alyssa Mautz could only deflect the ball skywards.

McCaskill, ever the opportunist, reacted quickest to shield the ball with her body, turn, and finish low and hard across Campbell.

Mautz made up for her error in the 68th minute, however, meeting an unorthodox low corner from Nikki Stanton on the half volley to pull a goal back for the Western Australians – the third American to add her name to the scoresheet.

Just two minutes later, however, the game was settled – and in spectacular fashion.

McCaskill’s cross from deep in the corner was cleared into the path of Matildas midfielder Chloe Logarzo, who adjusted her body and unleashed a wicked strike into the top corner, sparking jubilation among the 6000-strong crowd at Kogarah.

Kerr ran her guts out to try and wrench her team back into the contest, drifting further and further wide to find space. On one occasion she picked out Mautz with a superb cross, but her teammate was flagged narrowly offside.

Instead it was McCaskill who was substituted to a standing ovation in stoppage time, having played a part in all four Sydney goals. The 22 year-old South Carolinian could hardly have hoped for a better debut season in Australia.

“It’s absolutely amazing,” she told Fox Sports after the match.

“This team has worked all season long for this moment, and now we get to enjoy it.

“We’ve kept faith in each other and kept working and we’ve improved as the season’s gone on. We finally put it all together today.”

Perth, meanwhile, tastes bitter disappointment for the third time, and is left wondering whether talisman Kerr will stick around for another campaign, or try her luck under the bright lights of Europe.

W-League grand final: Sydney seals the deal – and the season – with a 4-2 win