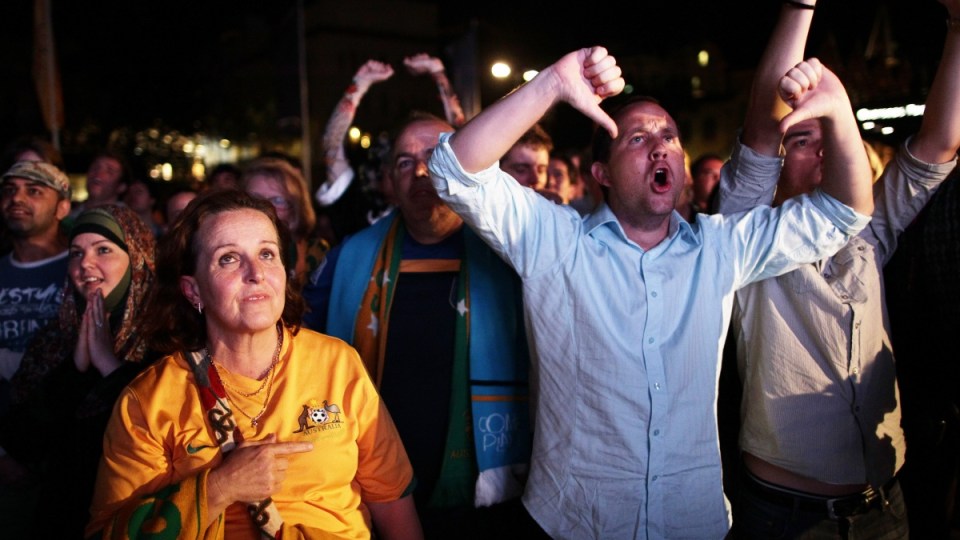 Socceroos fans were not happy with the announcement. Photo: Getty

FIFA has been urged to investigate explosive allegations surrounding Australia’s ill-fated bid to host either the 2018 or 2022 FIFA World Cup.

Australian taxpayers spent an estimated $45 million for a campaign that won just one vote as Russia (2018) and Qatar (2022) won hosting rights for sport’s biggest event.

Qatar’s victory was particularly surprising, given the strong bid submitted by the United States.

But fresh doubt has been cast over the Qatar bid, with an article published in The Sunday Times alleging that the team behind the bid used a PR agency and ex-CIA operatives to spread fake propaganda about the United States and Australia.

According to The Sunday Times, the Qatar bid team allegedly were interested in recruiting journalists and bloggers to write negative stories about the World Cup in the US and Australia.

They also reportedly looked at organising protests at rugby matches in Australia and paid a professor a four-figure sum to write a negative report on the economic costs of hosting such an event.

The claims were “rejected” by the Qatar bid team but British MP Damian Collins wants an urgent investigation.

“It requires a proper independent investigation and FIFA should make clear that will happen,” Collins told the BBC.

“If the Qataris have broken the rules, they should face some sanctions.”

Qatar beat the US, Australia, South Korea and Japan to host the 2022 World Cup.

“We have strictly adhered to all FIFA’s rules and regulations for the 2018/2022 World Cup bidding process,” Qatar’s Supreme Committee for Delivery and Legacy said.

Bonita Mersiades was a senior member of Australia’s bid team before she lost her job for questioning the controversial processes surrounding it.

Mersiades has also been a whistleblower on FIFA and told News Corp an investigation into Qatar’s alleged activity was necessary.

“I have been aware of these allegations and rumours for some months,” Mersiades said.

If world football and FIFA are to have any hope of credibility, the documents need to be given to FIFA and shared with the world, and investigated independently as a matter of priority.”

Former Socceroo Robbie Slater told News Corp that there was no reason Australia could not host the 2022 tournament in the unlikely event Qatar would be stripped of hosting rights.

But Slater does not feel Australia will bid to host the World Cup again anytime soon.

“We weren’t even second, we got one vote,” Slater said.

“It’s all hypothetical but could we do it? There’s no reason why we couldn’t. Would the government support it? I don’t know.

“It’d have to be offered to you. There’s no chance of us bidding for another one given all the s––t that happened at the last one and with the waste of money.”

England were among the unsuccessful bidders to host the 2018 World Cup and Lord Triesman, who chaired that bid, was among the voices to call for an investigation into Qatar’s 2022 bid.

“I think it would not be wrong for FIFA to reconsider England in those circumstances … we have the capabilities,” he said.