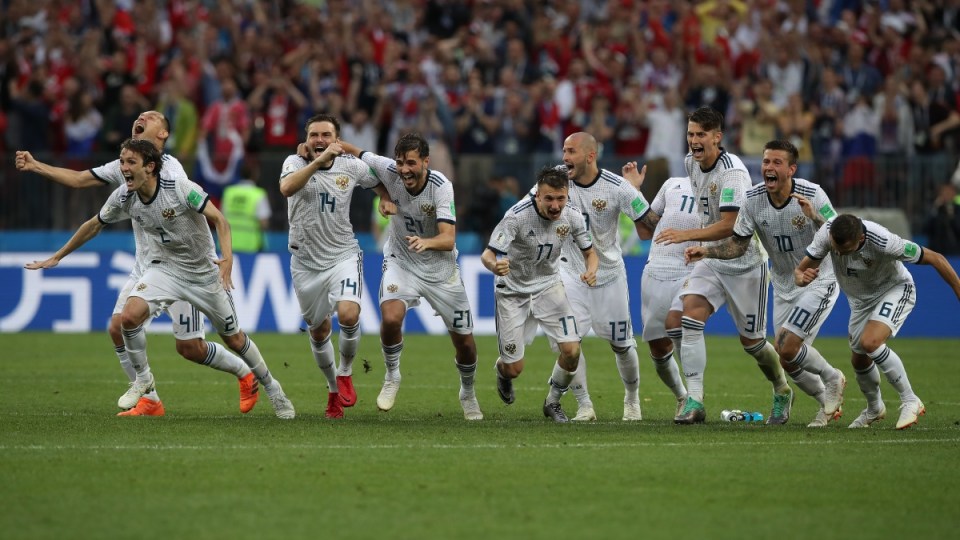 The Russia team celebrate as they win the penalty shoot out against 2010 champions Spain. Photo: Getty

World Cup host Russia has shocked tournament favourite Spain 4-3 on penalties to advance to the quarter-finals on Monday morning (AEST).

With despite Spain holding more than 74 per cent possession, completing an astonishing 1137 passes and holding utter territorial domination, it was a Gerard Pique handball that delivered Russia the equaliser and ultimate win.

Russia keeper Igor Akinfeev saved Koke’s and Iago Aspas’s spot kicks in their first ever penalty shootout to send the hosts through following a turgid 1-1 draw over 120 minutes.

However, in truth it was just about the only time the Russia goalkeeper was seriously tested as the 2010 champions managed only nine shots on target – and precious few of those carried any venom.

Spain reached the pinnacle of the sport on the back of a game built on relentless passing aligned with bottomless patience and faith that they would always, eventually, find a way through.

On Sunday, that patience proved their undoing against a desperately tired and wilting last 16 opponent who should have been ripe to be sliced apart.

Instead, Spain seemed entirely incapable on increasing the pace as, minute by minute, home hopes grew from a long-shot dream, through a gradual realisation that their highly-ranked rivals were not actually that dangerous, to eventual delirious celebration.

With 35 minutes on the clock Spain had made 300 passes to the 63 of Russia, but had not mustered a single effort on target and led only through Sergei Ignashevich’s comical own goal.

Russia’s approach was to sit deep and allow the ball to be caressed around in front of them at little more than walking pace.

It looked a sensible approach as, with Andres Iniesta surprisingly dropped to the bench, none of the Spaniards seemed willing or capable to inject that game-changing moment of acceleration or inspiration that has been their trademark for a decade.

So a stalemate ensued – until after a rare attack Russia found their way back level via Artem Dzyuba’s 41st-minute penalty after Pique’s handball from a corner.

Gerard Pique with a handball in the box. Russia have a chance to equalize! #ESP #RUS #ESPRUS #WorldCup #WorldCupRussia2018 #FifaWorldCup2018 pic.twitter.com/9qcu38lTCv

There was little change in the pattern after the break, forcing coach Fernando Hierro to introduce Iniesta.

With Russia withdrawing Dzyuba, the hosts played the last half hour of normal time without anyone left upfield as an outlet, with all 10 outfield players content to sit even deeper as Spain continued their possession domination.

The home crowd greeted the arrival of extra time as if they had won the World Cup but Spain, seeing several of their rivals dropping to the floor with cramp and exhaustion, were no doubt confident that the hosts would eventually crack if they just kept rolling the ball from side to side.

The Russians, who covered more ground per-player than any other side in the group stage, deserve enormous credit for the work they put in to stay tight and close down every threat. Though, in truth the limited and slow-paced movement from Spain’s front men made it an easier task than it should have been.

They held firm as extra time reached the halfway point and then summoned a Herculean final effort in the final 15 minutes as Spain finally seemed to realise their looming predicament.

Preparing for their first major tournament shootout, it looked as if coach Stanislav Cherchesov might struggle to find five men with enough energy left to take a penalty.

In the end he needed only four after Akinfeev’s heroics completed one of the all-time great World Cup backs-to-the-wall performances and sent Russia into the quarter-finals.

Meanwhile, Croatia came back after conceding in the opening minute to earn a World Cup quarter-final berth after edging Denmark 3-2 in a penalty shootout after the two sides drew 1-1 in the round of 16 match.

They could have wrapped up the result five minutes from the end of extra time but Luka Modric had his penalty saved by Kasper Schmeichel.

However, the Croatia captain returned to bravely take one of the post-match kicks as goalkeeper Danijel Subasic save three of Denmark’s efforts to set up a quarter-final meeting with Russia.

Two chaotic goals in the opening four minutes made for a rollicking start at the Nizhny Novgorod Stadium.

However, it proved a false dawn as the spectacle faded with both sides choosing caution as their priority given the rare chance to reach the last eight at a World Cup.

Jorgensen took all of 57 seconds to breach the Croatia defence at the end of a long throw-in by Jonas Knudsen, stabbing at the ball with his left foot as he took it off team mate Thomas Delaney.

Croatia goalkeeper Danijel Subasic got a hand to Jorgensen’s toe-poke but effectively deflected the ball across his own line.