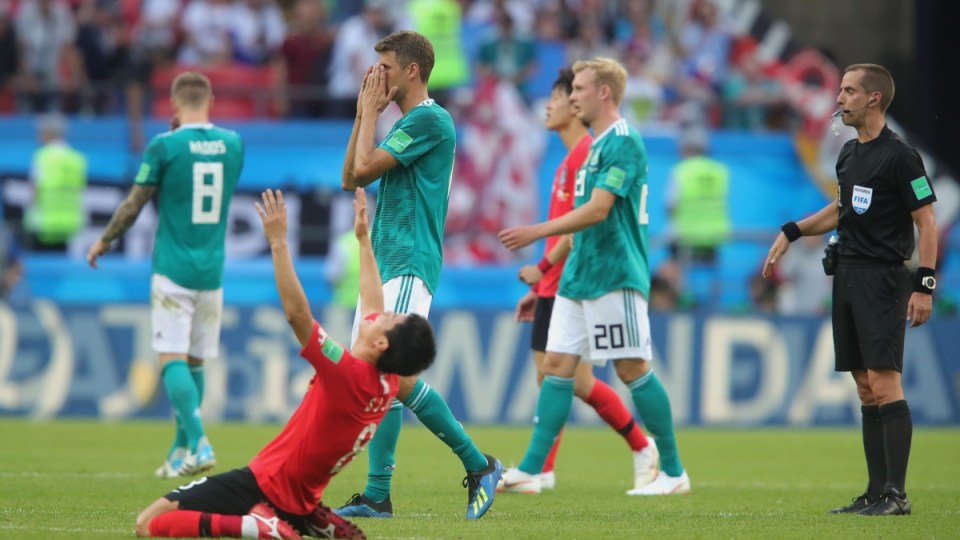 Germany became the third straight champion to be eliminated in the group stage. Photo: Getty

Reigning champion Germany has been sensationally knocked out of the 2018 FIFA World Cup following a stunning 2-0 loss to South Korea on Thursday morning (AEST).

Germany is the third successive World Cup holder to be eliminated in the group stage, following Italy (2010) and Spain (2014), while Brazil also achieved the unwanted feat in 2002.

Germany’s stuttering title defence looked to be back on track after Toni Kroos’ dramatic extra-time winner against Sweden last week, but there was to be no late show in Kazan as, after the favourites missed a series of late chances, South Korea hit back twice on the counter-attack.

One of the biggest shocks in tournament history was even more surprising given Germany’s ultra-consistent record, the European heavyweights finishing at least third in the last four World Cups.

This was also the nation’s first group stage exit at a World Cup since 1938.

Speaking after late goals to Kim Young-gwon and Son Heung-min condemned his side to an early exit, Germany coach Joachim Loew said he was shocked.

“Shocked because we didn’t manage to pull it off … the disappointment of us being eliminated is just huge,” Loew said.

“How do we go from here? We’ll have to talk about it calmly … it will take me some hours to come to terms with it and I’m incredibly disappointed by this elimination.”

As a result of its defeat, Germany finished bottom of Group F, behind South Korea on goal difference. Sweden beat Mexico 3-0 in the other pool match on Thursday morning (AEST) as both sides advanced to the last 16.

Mexico’s defeat means it will face Brazil, though, the South American nation recording a 2-0 victory over Serbia in Moscow thanks to goals from Paulinho and Thiago Silva.

Switzerland will take on Sweden in the next stage despite being held to a 2-2 draw against Costa Rica.

While there was no retirement announcement after Australia’s loss to Peru, Tim Cahill has surely played his last match of international football.

The 38-year-old – a second half substitute in the 2-0 defeat in Sochi – declined to speak to the Australian press after the match, but a brief interview with FIFA’s official website emerged on Wednesday evening (AEST).

“I was just happy to grace the pitch and have the opportunity to try and score in the short space of time that I had,” he said.

“This is all about playing for your badge, for your country, it’s more than football …. It means everything.”

Cahill also revealed he left the Australia camp with some parting words of wisdom.

“I just said to the boys [after the game] ‘be grateful’ because this opportunity might not ever come around again, and I’m lucky enough to have had four of them,” he added.

Argentina legend Diego Maradona has moved to assure fans he is feeling “fine” after reports suggested he had to be taken to hospital following his nation’s last-gasp 2-1 win over Nigeria on Wednesday morning (AEST).

And after he posted a picture of himself on social media with medical staff, it was suggested that he had to be taken to hospital.

“I want to tell everyone that I am fine,” he wrote on Instagram.

“I was checked by a doctor and he recommended me to go home before the second half but I wanted to stay because we were risking it all.

“How could I leave?”

The problem was with Maradona’s neck, which he said “hurt a lot”.

Sochi is the playground for Russia’s rich and famous, and comparisons to the Australia’s Gold Coast were not far off the mark.

The climate is warm and very humid in summer, a culture shock to those coming from the middle of Australia’s winter.

The result was obviously a blow from an Australian perspective but the Peru fans deserve special praise.

The roar when they took the lead against the Socceroos was deafening and unforgettable.

It promises to be a tense end to Group H when Japan meets Poland and Senegal do battle with Colombia at midnight.

And while the race to reach the last 16 from Group G is over, England and Belgium will play off for top spot in an eagerly anticipated clash at 4am. Panama takes on Tunisia at the same time.

All matches are live on SBS and Optus Sport.