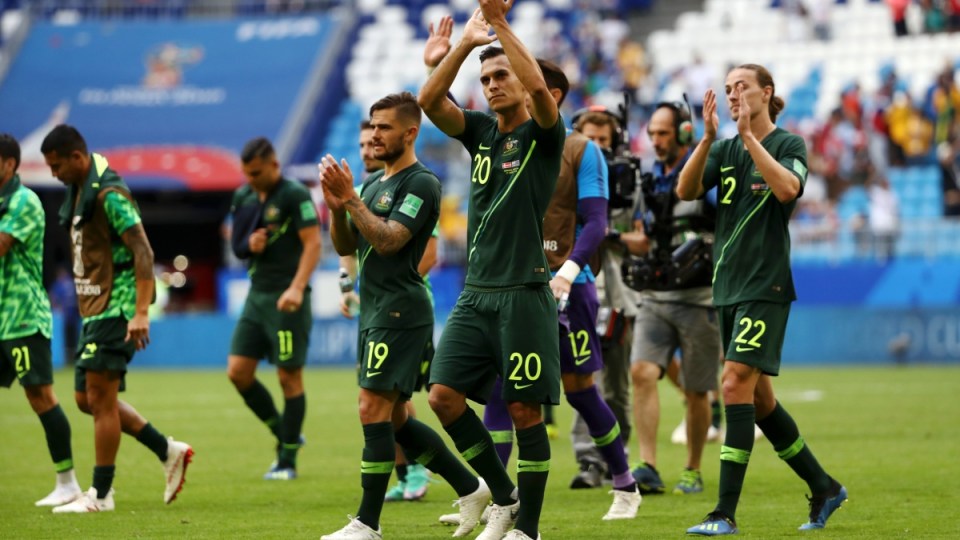 The Socceroos need a lot to go their way this week if they are to get through. Photo: Getty

The 1-1 draw against Denmark keeps Australia’s interests alive in the World Cup, but only just – and we need quite a bit to go our way next week.

Again, Australia showed it could mix it with the big boys in the score-draw with the Danes, but again it was a night of frustration and what-could-have-beens.

So here’s the lay of the land: The Socceroos are on one solitary point after a draw and defeat, while France sits on six points, Denmark four and Peru zero.

Group C is tantalisingly poised. And it all comes down to the final round of fixtures, which sees Australia play Peru at the same time Denmark faces France – something for the chameleon-eyed football fans among you to enjoy.

Those matches will kick off at midnight AEST on Wednesday, June 27.

Let’s start with the bad results: What happens if we lose or draw?

The same thing. Australia cannot advance with anything other than a win over Peru.

A draw would put us on two points, behind France’s six and Denmark’s four (before even taking their fixture into account), sending Australia home.

So we need to beat Peru. Got it.

You better believe it. And all the while, we’ll have our collective beady eye fixed on what Denmark gets up to against France.

Australia needs Denmark to lose against France. Not draw, and certainly not win. Lose.

And that’s where it gets interesting, because with six points, France is qualified for the next round. Will they put out a second string to rest their stars against Denmark?

That’s one thread of thinking, but there are reasons why France would keep their first-choice XI intact, more or less, for the final group game. Namely, there’s an incentive to top the group.

Whoever finishes runner-up in Group C will play Group D’s winner. That could be a very dangerous Croatia side, or an out-of-sorts Argentina team. If it really goes pear-shaped for Lionel Messi’s side, you could even see plucky Iceland nab second spot.

Point being, you want to finish first. Teams who are in it to win the whole shebang take these games seriously, and France are listed as one of the main contenders for a reason.

You could even argue there’s more of an incentive on the Danish side to play for the draw, which could invite all sorts of French pressure on their back line — but that’s clearly asking for trouble. Speculatively, we’d guess that both teams will be going for the win.

So assuming France beats Denmark 1-0, what does Australia need to do?

Denmark’s goal difference – there’s that phrase we all love – is +1 heading into the last group stage clash. Australia’s is -1. So a two-goal turnaround is required.

Half of that can be achieved by a one-goal win for France over the Danes. We would need to keep up our end of the bargain and beat Peru by a goal ourselves.

That would leave both Denmark and Australia on four points, and both on an even ‘zero’ goal difference.

So what determines group ranking after goal difference at the World Cup? It’s not head-to-head, like it was at Euro 2016. Instead, it’s most goals scored.

So that would mean Australia, assuming a 1-0 win over Peru, would have scored three goals to Denmark’s two (assuming they lose 1-0 to France). Australia would go through on this permutation.

But what if Denmark loses in a high-scoring clash with France?

Indeed, that is where things start to get slightly trickier for Australia. Let’s say France and Denmark play out the match of the tournament, with Les Bleus beating the Danes 4-3.

Assuming Australia again beats Peru 1-0, the goal difference remains ‘zero’ for both teams. But when it shifts to the next deciding metric of ‘most goals’, Denmark suddenly has more than Australia.

So that would mean the Socceroos need to beat Peru by two goals or more. Not the easiest of tasks, certainly.

Spanner-in-the-works time: What if Denmark loses 2-1 to France, and Australia wins 1-0?

Australia can still go through if it beats Peru by two goals or more. But in this hypothetical – where France beats Denmark 2-1, and Australia defeats Peru 1-0 – we have to go through a number of tie-breakers beyond goal difference and goals scored.

Denmark and Australia would be level on points and goal difference, and equal on goals scored in the above hypothetical. Tie-breakers four, five and six are also cancelled out by the 1-1 draw on Thursday night.

So it would then come to tie-breaker seven – fair play points – to decide both teams’ fate.

Before the third and final group game, Australia is ahead of Denmark in this metric.

By that measure, Australia sits on -3 points (three yellows against France, none against Denmark) and Denmark is on -4 (two against Peru, and two against the Socceroos).

So Australia has a one-point “handicap” advantage, if you will, heading in to the final game. If they concede the same amount of yellows, or fewer, against Peru than Denmark does against France, Australia advances on this metric.

If they concede one more than Denmark, who lose 2-1 while the Socceroos triumph 1-0, then we’re going to the drawing of lots by FIFA – an eventuality as feared as it is incredibly unlikely.

Drawing of lots? You can’t be serious…

Oh we’re deadly serious. If after seven different tie-breakers two teams can still not be separated, FIFA steps in and challenges a team not to pick the short straw.

It’s only ever happened once in tournament history, and it was to separate two teams already qualified.

Back in 1990, Republic of Ireland and the Netherlands duked it out in a drawing of lots to determine second and third place in their group — but they were both assured of qualification. So a team has never been eliminated by this method … yet.

But you can certainly bet if it gets this far, and we end up on the wrong end of it, the FIFA conspiracy theories and angst will reach fever pitch.

FIFA World Cup 2018: Everything that must happen for the Socceroos to advance in Russia