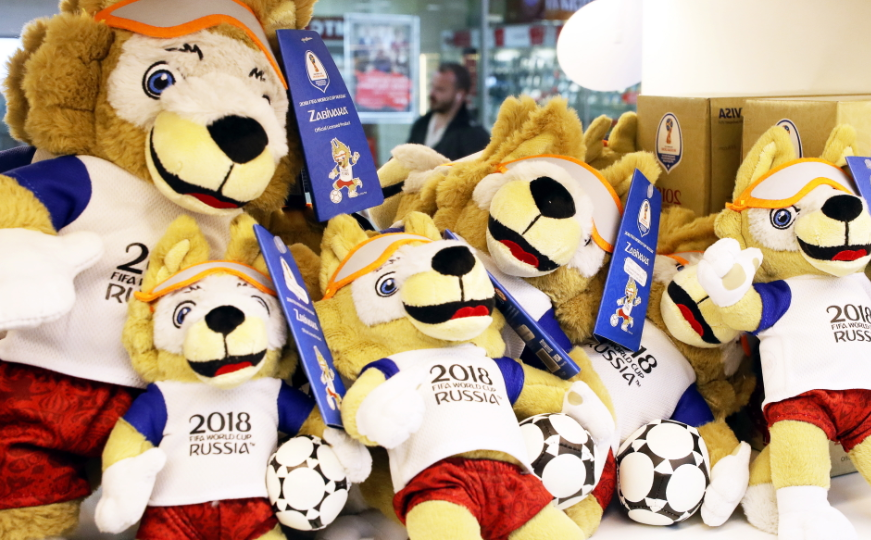 Cup mascot Zabivaka is meant to be the friendly face of the event, but it's not what Australian fans are finding. Photo: EPA/Maxim Shipenkov

Australian football fans are reeling after the visas they had been granted to the FIFA World Cup in Russia were rejected without warning or explanation just weeks before the competition is due to begin.

A growing number of Socceroos supporters received emails from the Russian Government informing them their Fan IDs, which act as a visa for ticket holders, had been rejected despite having already received the physical Fan ID document.

Aaron Camm is a die-hard Socceroos fan who has travelled the world to watch them play, and he was looking forward to going to his first World Cup.

“I’m absolutely passionate about football, so when I got the ID through I was just like ‘oh this is starting to feel real, I’ve got this nice laminated ID, I’m going to the World Cup’,” he said.

“I’ve been wanting to go to the World Cup since I was eight years old when I watched France ’98. It’s a dream come true.”

Mr Camm, who has spent several thousand dollars on tickets and flights to attend the competition, asked for an explanation.

After a chain of emails, in which he had to provide passport details to prove his identity, Mr Camm received one final communique.

“Just a copy and paste from the terms and conditions saying that they reserve the right to cancel at any time,” he said.

Not an isolated incident

Mr Camm, who has arthrogryposis multiplex congenita — a physical condition that affects joints and muscles — was due to travel to Russia with about 30 friends.

But that dream was shattered a week ago when he received a one-line email from what appeared to be the official Fan ID website.

It simply stated “Your application — for FAN ID has been rejected” and did not provide any other details.

They all booked their tickets and applied for their Fan IDs separately, but another four people in the group have also had their applications rejected.

Reuban Garlett was one of those to have his visa cancelled, despite having the physical card on his living room table.

At first he suspected the email could be a scam.

“I went to the Fan ID website and used their contact form in case it was not legit,” he said.

“I basically just got a standard response saying they have the right to cancel anyone’s Fan ID without providing any particular detail around the cancellation.”

What is Fan ID? How does it work?

Fan ID is a system designed to couple World Cup tickets with a visa, allowing the ticket holder entry to the country from 10 days before until 10 days after the tournament.

The system was first used during the Confederations Cup in Russia in 2017 as a means of curbing fan violence, and it was deemed generally successful.

The system requires ticket holders to apply for a personalided ID, which allows authorities to screen for links to hooliganism, and ban those people from the tournament.

The FSB is a military intelligence arm of the Russian Government, similar to its Cold War predecessor, the KGB.

There were issues during the 2017 tournament, with about 450,000 people being granted Fan IDs, before some fans saw their IDs cancelled during the tournament.

Earlier this month, Reuters reported a football fan blacklisted by Russian authorities for bad behaviour had been granted an ID for the World Cup.

Mr Camm, who uses a wheelchair due to his disability, is adamant he hasn’t done anything to warrant being banned from the tournament.

“I’m trying to rack my brain and think what have I done,” he said.

“I can’t do anything, I had to get carried into the stadium in Bangladesh.”

His hopes of attending the tournament now rest on an application for a tourist visa, which would grant him entry to Russia.

The ABC contacted the Russian Embassy, and was told to call back on Monday. Foreign Minister Julie Bishop declined to comment.

The Department of Foreign Affairs and Trade said in a statement the matter was one for the organisers of the tournament and the Russian Embassy.