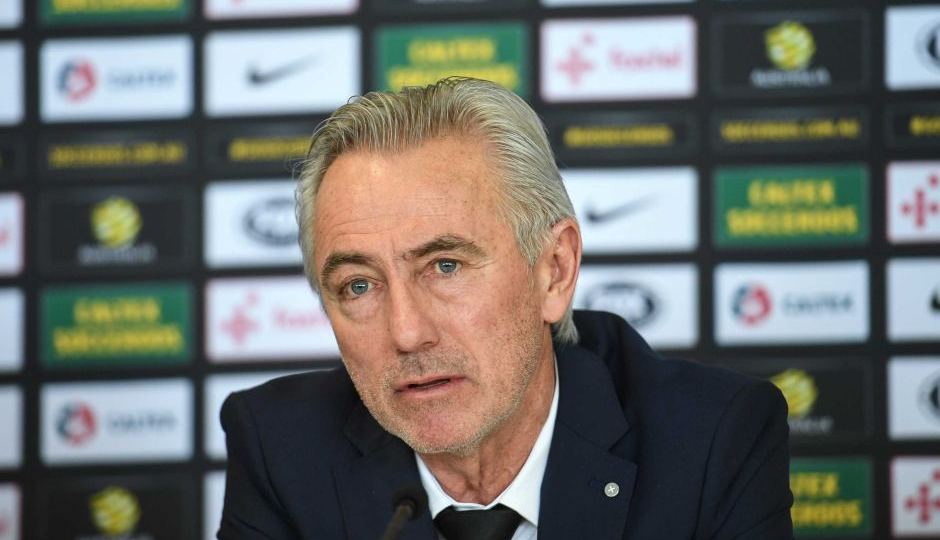 New Socceroos coach Bert van Marwijk would not have accepted the post if he didn’t think Australia could “survive” their World Cup group.

But the straight-shooting Dutchman, hired on a smash-and-grab mission for this year’s tournament in Russia, has no intention of getting there on Ange Postecoglou’s philosophy.

A few hours after arriving in Sydney on Thursday morning, van Marwijk drew a pronounced line under the Postecoglou era, declaring he will manage the national team his way and that it’s a “mistake” to play a style that doesn’t suit the players available.

While making clear there was nothing wrong his predecessor’s approach, the 2010 World Cup finalist described himself as a “realistic coach” willing to do what it takes to win.

That was not necessarily the ultra-pragmatist some have typecast the former Holland manager as, rather a respect for what he described as “modern football”, of how to influence a contest with and without the ball and score in transition.

“I have respect for the former coach, (but) I do it in my way,” van Marwijk said.

“I go to the World Cup with only one thing that counts, (and that’s) to survive the first round.

“I’m a realistic coach. I like creative football, I like to have the ball, but I also like to win – that is the most important thing.

“I think it’s important that we play in a way that fits the players and also the coach.

“You cannot play in a way the players cannot do, and when they don’t like to play in a way you want to play, then you make a mistake.”

Beguiled by Australia’s “special sports culture”, van Marwijk was happy to be head-hunted by the Socceroos half a year after qualifying Saudi Arabia directly from the same Asian qualifying group, before falling out with their national federation.

It wasn’t about the money – Football Federation Australia’s restricted budget attests to that – nor is he interested in the post long-term.

The goal is another shot at a World Cup in Russia leading a team with potential.

In that context, FFA was convinced it had found the right man, with chief executive David Gallop labelling van Marwijk’s “intimate knowledge” of Australia’s players, learned as an opposition coach, as a critical factor.

Time is now of the essence for the 65-year-old, who will take in A-League games this weekend before acquainting himself with the core of the squad in Europe, amid a hope to identify new talent before March’s friendlies against Norway and Colombia in Europe.

It’s a challenge he admits is great, with four months between now and the Socceroos’ first World Cup clash against France in June, before further group games to follow against Denmark and Peru.

But he also believed he had much to work with in a group of players boasting excellent physicality.

“The challenge is to let them play in a way that gives a them a chance to win games.

“It is important for me to get to know the players and their qualities.”

Do that and van Marwijk is optimistic the Socceroos are heading for the round of 16 in Russia.

“If I don’t have confidence in that I would not sit here,” he said.

“I know it will not be easy but – and I already said with Holland also – maybe we don’t have the best players but we can be the best team.”