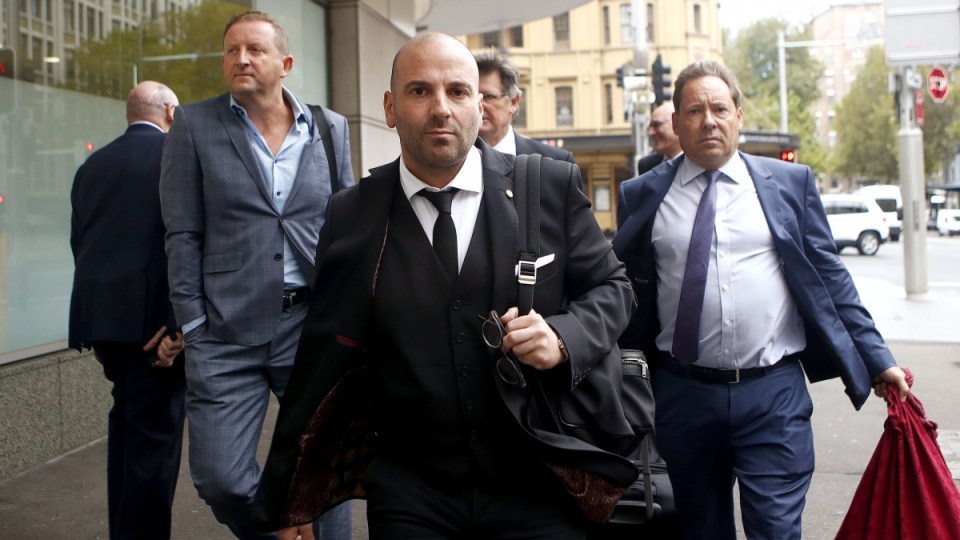 Calombaris has been in court several times regarding the matter. Photo: Getty

Celebrity chef George Calombaris had his conviction for assault at last year’s A-League Grand Final overturned in a Sydney court.

Calombaris was convicted and fined $1000 in October after entering a guilty plea to an assault charge stemming from a punch he threw at a 19-year-old fan.

But he successfully appealed the conviction on Wednesday, with Judge Andrew Scotting saying the 39-year-old chef and TV identity was remorseful and “had a genuine belief his mother had been seriously denigrated” by the teenager.

He imposed a 12-month good behaviour bond on Calombaris, who claimed to have lost around $750,000 in endorsements as a result of his punch.

George Calombaris has been charged with assaulting a 19 year-old-man. #9Today pic.twitter.com/M5ZFSW1SW8

Calombaris, a Melbourne Victory supporter, was on the Allianz Stadium pitch after his team lost to Sydney FC in a penalty shootout in May’s grand final.

Sydney FC fans then goaded him about the underpayments scandal surrounding his business and, according to Calombaris, made unsavoury comments about his mother.

That led to Calombaris walking towards the fence and punching a Sydney fan in the stomach.

At another hearing in September, a court heard that Calombaris told the teenager he punched “you’re a big-mouthed man you dodgy c—” before he attacked him.

“You don’t call anyone’s mother that word, regardless of whether you know them or not,” Calombaris said.

“What I did was wrong, unacceptable. And I apologised the next day.”

Judge Scotting said that: “The appellant [Calombaris] was provoked by the victim.

“From reading the facts and my view of the video evidence, it is clear the appellant approached the victim angrily. On reaching the victim he was verbally abusive as well as throwing a punch or a push to the stomach area of the victim … the blow was not very forceful.

“To my mind, he is largely rehabilitated already in respect of this particular incident.”

Calombaris added that he was still extremely apologetic for his actions, dubbing it as a “brain freeze”.

“I still remain deeply remorseful for my actions,” he said.

“As I previously stated, I sincerely apologise to everyone involved.

“I also want to reiterate my apologies to Melbourne Victory football club and the Football Federation of Australia for any impact of my actions on the reputation of the sport that I absolutely love.

“I will continue my self-imposed 12-month ban of attending all football games here in Australia.

“I would like to thank my family, my friends … everyone that’s played a massive role in supporting me and caring for me during this, what has been a tough last seven months.

“The process has given me significant cause for self-reflection, and I know that as a result I’m definitely a better person for it and hopefully a role model for people out there.”

In April last year, Calombaris apologised after 162 staff from his company, Made Establishment Group, – including staff at his Melbourne restaurants The Press Club, Gazi and Hellenic Republic – were underpaid a total of $2.6 million.

The cost of a punch

Calombaris opened up in court about the financial toll his moment of madness had taken.

He said that two of major ambassador roles were revoked within days of the incident making news.

Motor group ULR paid Calombaris close to $500,000 a year to be a company ambassador, but they no longer use his services, while Bulla Dairy also called it quits on their $250,000 deal with the Masterchef co-host.

But Calombaris also said that he had suffered emotionally in the fall-out and that he was now focusing on “being a better man”.

George Calombaris back in court again after infamous A-League punch