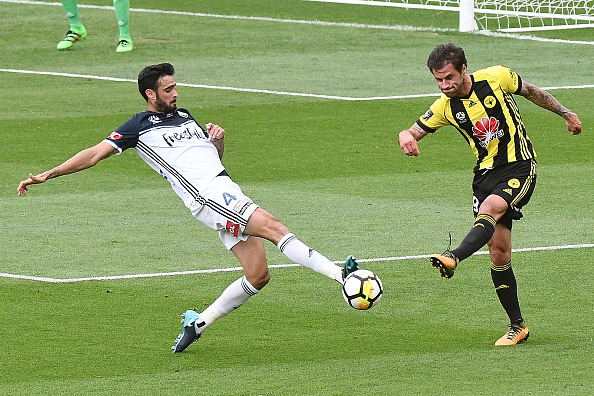 Victory fought back from a two-goal half-time deficit at Westpac Stadium in Wellington on Sunday to record just their second win of the A-League season.

Eighth on the ladder going in, Melbourne still struggled to convert its chances after conceding two first-half goals from Andrijia Kaludjerovic headers.

But the visitors dominated Wellington’s disorganised midfield, laid siege to an error-ridden defence in the second spell and were rewarded for their persistence.

Besart Berisha’s 54th-minute tap-in sparked the comeback, with an own goal three minutes later off Goran Paracki levelling the scores before the deadlock was broken by James Troisi’s 86th minute winner.

The win shunts Melbourne up the table to sit equal with fifth-placed Perth on 10 points.

“I thought they answered my questions superbly in the second half and we could have got a few more.”

Phoenix coach Darije Kalezic was happy with his players’ efforts in the first half but questioned their attitude going into the second spell.

“We controlled the game in the first half – it was a nice game, an open game and I was satisfied with how we performed. We played narrow, we didn’t give a lot of space between the lines for the Victory and that worked perfectly.”

He said it had been obvious Melbourne would come out firing after a half-time rev-up from Muscat.

“That means they will be 10 or 20 per cent better in the second half, so that was the message to the players at half-time but for one or another reason, the players didn’t take this message seriously.

“If we concede again goals in the beginning of the second half, then that is something mental.”

Vidmar, who made 76 Socceroos appearances and played professionally in Europe for more than a decade, coached City youngsters Stefan Mauk and Daniel Arzani during his time in the junior national teams’ set-up.

“From everything I have seen, Melbourne City is a club with great ambition and determination,” Vidmar, who starts his new role on Monday, said in a club statement. “It’s one year since they won the first men’s trophy, and I hope to be part of further success in the coming season.”

Melbourne Victory finally have ‘self-belief’ with gritty win over Phoenix