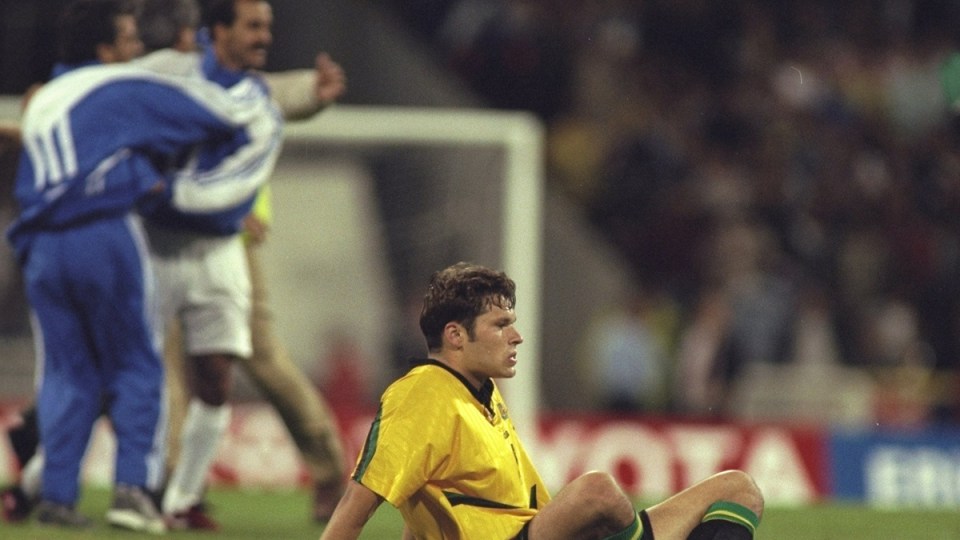 “Normally you leave a game and there are people talking, even if you lose. But people were leaving and they just weren’t talking.

Utter silence engulfed the MCG after one of the darkest moments in Australian sport.

And 20 years on, Australia’s failure to reach the 1998 FIFA World Cup still brings back painful and heartbreaking memories for players and fans alike.

Leading 3-1 on aggregate against Iran with just 15 minutes to play, the Socceroos – and 98,000 screaming fans – thought they were home.

But it infamously unravelled from there, leaving distraught supporters to question if they’d ever reach the World Cup again – given the knowledge Australia’s drought would stretch at least 28 years (it ended up being 32).

“I walked back to my hotel in Carlton and sat in the bathroom and cried,” Socceroos fan Paul Marcuccitti told The New Daily.

“I’ve never cried after a game since, but that result just killed me.

“I sat there trying to process what had just happened … I was in shock.”

The scenes were eerily similar in the change rooms of a team that included the likes of stars like Harry Kewell, Mark Bosnich, Craig Moore, Ned Zelic, Mark Viduka and Aurelio Vidmar.

Vidmar, who scored Australia’s second goal on the night but also squandered a hatful of chances, recalled the mood.

“There were quite a few blokes in tears,” he told The New Daily.

“You couldn’t hear anything else except that [crying]. You could have heard a pin drop.

Moore, just 21 at the time, added: “It was as low as what you could expect it to be. Everyone was pretty emotional and devastated.”

The mood could not have been more different only 30 minutes earlier.

Delirious Socceroos fans were dancing in the aisles after Vidmar’s goal, convinced that little old Australia would finally be heading back to football’s biggest stage.

Those in attendance speak fondly of the crowd who provided a ‘real football’ atmosphere – something that is far from a given in Australia.

A gritty 1-1 first-leg draw in Iran – in front of a reported crowd of 128,000 fans – had set it up for the Socceroos, and they were following the script.

In fact, Australia should have been far more than two goals ahead given its absolute domination of Iran in the first half at the MCG.

Iran was pinned in its own half and somehow stayed level for more than 30 minutes before Kewell broke the deadlock, slotting home from close range.

“When Kewell scored, the mood in the crowd was really positive,” Marcuccitti – who travelled to Melbourne from Adelaide with friends – recalled.

“We were all a bit relieved, more than anything, because there’d be so many chances up until then.”

Vidmar’s goal followed, three minutes into the second half. Surely that was enough?

“I thought that we were home,” Marcuccitti said.

“Iran had barely crossed the halfway line. I thought ‘How are these guys going to get two goals the way they’re playing?'”

Peter Hore – known as a ‘serial pest’ in Australian sport – then ran onto the pitch and damaged the Iranian goal, causing a five-minute break in play.

Many judges, with the benefit of hindsight, say Hore was to blame for Australia’s loss of momentum.

But the reality is that the Socceroos were still on top following his intervention, and it was only as the end of the match drew nearer, and Iran took more risks, that they began to pose a threat on the break.

“With the incident that happened in the second half, when the game had stopped, concentration can obviously play a part,” he told The New Daily.

“It’s easy to say if the game never stops we’re playing in the World Cup in France in 1998 but the game did stop … a lack of concentration, two goals [to Iran] and we’re gone.

Goals to Karim Bagheri and Khodadad Azizi saw Iran take the lead (based on away goals), and despite Australia’s best efforts to conjure a dramatic late winner, it wasn’t to be.

For many players involved that night, like Vidmar, they would never play at a World Cup.

Moore can’t help but remember how bad he felt for them on that fateful evening.

“We had a lot of fantastic players that had contributed a lot over many, many years to the national team,” he said.

“That was kind of that last opportunity that slipped through all of our hands at that time.

“At the time, I actually felt more pain for other people.

“I was one of the fortunate ones that still managed to go to a World Cup because I was young enough. Some of those guys were never going to get another opportunity.”

A replay of the match, shown on Wednesday to mark the 20-year anniversary, was broadcast on Fox Sports.

Many football fans couldn’t bring themselves to watch it again, while others sat through it again for a trip down memory lane.

Vidmar wasn’t among them.

“I try and forget it. I’ve never watched it,” Vidmar said.

“A mate of mine told me the other day that it was on television and he said I should watch it.

Has Moore watched it back? “Never,” he said with conviction.

Australia may have eventually broken its World Cup drought, qualifying for the 2006 edition in a dramatic and historic penalty shoot-out against Uruguay, and the Socceroos have done well to reach every tournament since.

It wasn’t always this way.

Inside Australian sport’s most devastating night, 20 years on