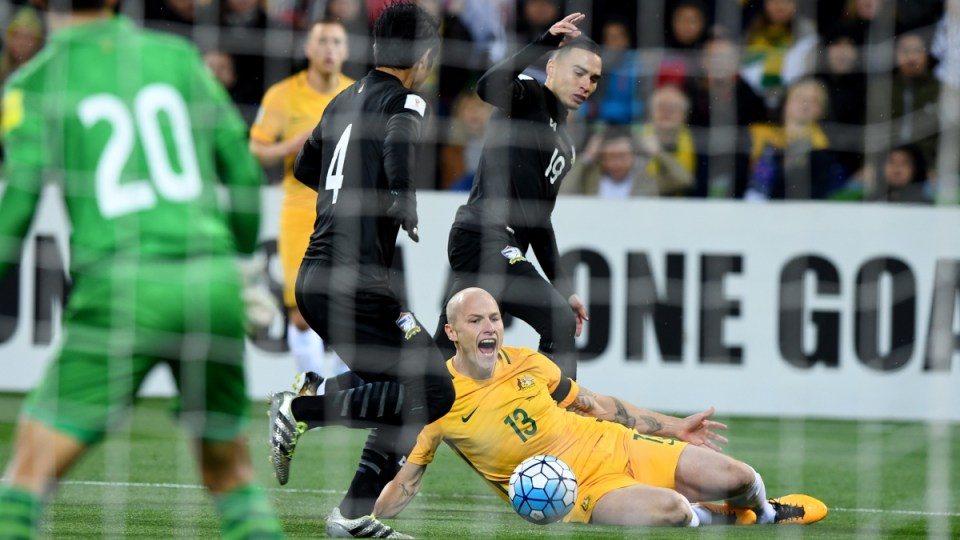 Socceroos Aaron Mooy is brought down in the box during the match against Thailand. Photo: AAP

The Socceroos’ World Cup nightmare has come true after Saudi Arabia’s 1-0 win over Japan denied them direct qualification and forced them down the arduous intercontinental play-off route.

Australia needed a big favour from already-qualified Japan on Wednesday morning – either a win or a draw in Jeddah – to bail them out of trouble after Tuesday night’s hollow 2-1 victory over Thailand.

Australia now needs to negotiate two difficult home-and-away matches through Asia, and North and Central America – the first against Syria in October.

The winner of that play-off will go on to battle North and Central America’s fourth-placed qualifier –likely to be either Panama, Honduras or United States – in November for a spot at Russia 2018.

Mathew Leckie earlier gave the Socceroos a World Cup qualifying lifeline with a late winner for Australia over Thailand in Melbourne.

Leckie’s goal – coming after Tomi Juric’s opener and Pokklaw Anan’s stunning reply – proved not to be enough to send the Socceroos to Russia.

There was no lack of enterprise on display at AAMI Park, where the Socceroos achieved the result they wanted, but not the scoreline.

On a numbingly cold Melbourne night, Australia laid siege to the Thailand goal.

Postecoglou’s side racked up an astonishing 45 shots, with the coach lamenting his team’s inability to score more goals.

“I can’t fault the players they did exactly what they needed to do tonight … just like I said we missed a little bit of luck,” he said on Fox Sports.

“If there was a more one-sided contest, I don’t think I’ve ever seen it.”

Both Aaron Mooy and Tim Cahill, returned to the starting line-up among six changes by Postecoglou, rattled the goalposts in the opening quarter-hour.

What appeared to be a rout in the making quickly turned into a frustrating night for the Socceroos.

Time after time, Australia went forward, only to be thwarted by the Thai rearguard.

Goalkeeper Sinthaweechai Hathairattanakool made a string of superb saves, none better than a close-range effort to deny Juric’s first-half volley.

The striker finally broke through on 69 minutes, heading home Mooy’s pinpoint cross and sparking a mad scramble to run up the scoreline.

Instead, it was Thailand who stunned Australia on the counter, with Pokklaw thrashing home off the crossbar with eight minutes remaining.

Leckie saved Australia late in the game. The right-winger jumped on a loose ball and threaded it through a congested box to ensure a Socceroos win.