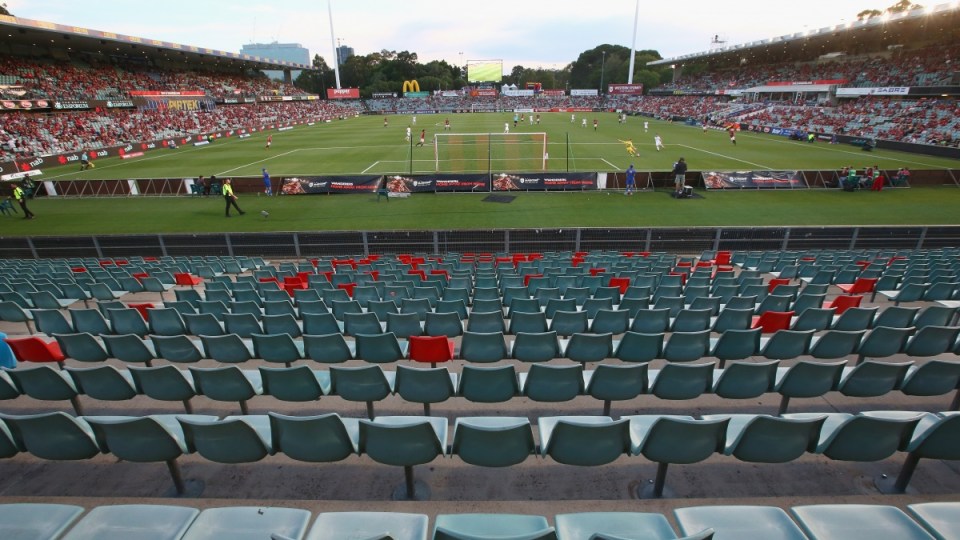 Attendance at A-League matches has been stagnating at lacklustre levels. Photo: Getty

Australian fans love the Socceroos. We love Lionel Messi and other international superstars.

We love the World Cup and the Champions League.

We even love having a game of soccer and watching our kids play.

What we don’t love nearly as much is supporting a domestic competition.

This season’s A-League marketing campaign was specifically aimed at turning a healthy participation rate at the grassroots level into a few more bodies through the turnstiles, but indications are it has had little impact.

Sure, the A-League seems like a massive step up from where we were 13 years ago, but the question has to be asked: is the ceiling for football fandom in Australia lower than the sport would like to admit?

Despite all sorts of hype, including the recruiting of some big-name international players as “marquees”, average attendances have hardly set the world on fire over the 12 seasons of the league.

While poor attendances for the North Queensland Fury and Gold Coast United skewed the averages down for a couple of seasons, when Melbourne Heart replaced the Fury for the 2010-11 season, they averaged 8312 and the league average was a meagre 8429.

Significantly, the Heart crowds didn’t even replace the “missing” Melbourne Victory fans, as the club with the best attendances dropped from its season 2 peak of 27,728 to 18,458 in that sixth campaign.

This season looks set to again register a figure around 12,500.

“I’d like to think that we’re only about halfway to where the ceiling is,” former Socceroos captain Paul Wade told The New Daily.

“It’ll be so disappointing if this is the ceiling.”

Wade says it’s clear that the A-League has brought the sport a long way from the amateur days of the old National Soccer League (NSL).

“I think it’s obvious that we’re a lot better off now,” he says.

“One of the last games I covered on C7 Sport there were 2000 people at North Sydney Oval for Northern Spirit.

“Would you have thought that we could get over 100,000 for two games?” he says of the current season’s first two local derbies.

“To now see that many people … and the singing that goes on, I think that’s been a massive change.”

It’s fair to say that the A-League has made supporting a domestic soccer team far more mainstream than it once was, but perhaps this is as good as it gets?

Crowds like the nearly 62,000 who attended the season-opening Sydney derby are extraordinary.

The five matches of Round 22 drew fewer than 42,000 fans combined, despite kicking off with a clash between the dominant Sydney FC and their main challenger, Victory.

“I’m very disappointed with the crowds that don’t turn up to Sydney FC games,” Wade laments.

Wade observes that Australian fans tend to support a team in a top European league in preference to a local one.

“Our local product is good, but it’s never going to be the best,” he concedes.