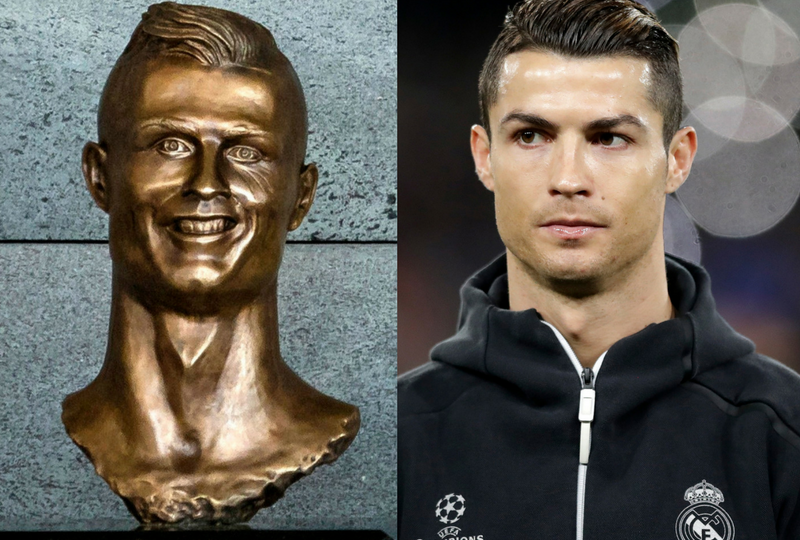 The statue, which bears a questionable likeness to Ronaldo at best, has been pilloried. Photo: AAP

Cristiano Ronaldo now has a statue and international airport named after him in his home town – the only problem is, the statue doesn’t really look like the heart-throb attacker that much.

The Real Madrid striker was joined on Wednesday (local time) by dozens of guests and hundreds of fans in his native Madeira Islands for an official ceremony renaming the local airport as Aeroporto Cristiano Ronaldo.

Portugal’s president and the prime minister flew to the island and unveiled a commemorative plaque outside the terminal entrance, above a bust of Ronaldo.

The 32-year-old Ronaldo is a local hero in Madeira, where he is seen as a rags-to-riches success. He already has another statue, a museum and a hotel named for him in Madeira.

People were quick to point out the statue’s obvious downfalls.

Funniest thing I've seen in a while! #RonaldoStatue #EpicFail pic.twitter.com/becqhPuPHv

Don't know what the fuss is all about with the new @Cristiano Ronaldo statue 👀 pic.twitter.com/KIe5UwrTl4

Despite the statue’s problems, Ronaldo was delighted with the ceremony and the gestures from his home town.

“You know how proud I am of my roots, my homeland,” Ronaldo said.

The four-time player of the year has made a record 138 national team appearances for Portugal and is the team’s top scorer with 71 goals.

The change was decided by the Madeira regional government after Portugal won the 2016 European Championship.

Critics said a more distinguished historical figure would be more appropriate. Petitions were started for and against the change.

Ronaldo acknowledged that it was rare for a public figure to be honoured while still alive, saying he was aware that some people didn’t agree with the name change.

However, President Marcelo Rebelo de Sousa said the tribute was legitimate because it was decided by an elected government.

Ronaldo, Rebelo de Sousa said in his speech, is “an example of excellence” and “projects Madeira and Portugal across the world far more than anybody else.”

Ronaldo is not the first soccer player with his name on an airport. In Northern Ireland, an airport was renamed George Best Belfast City Airport in 2006, a year after the local player and former Manchester United winger died.

Dodgy Cristiano Ronaldo statue unveiled in his hometown in Portugal