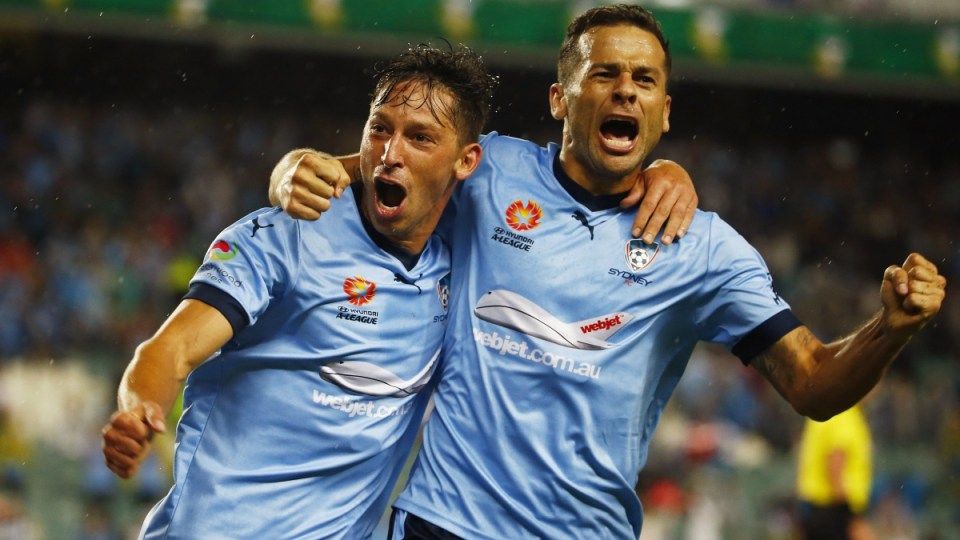 Sydney's Filip Holosko and Bobo celebrate victory over Melbourne in March - a result the favourites aim to repeat at Allianz Stadium.

It is the first time the Sky Blues have racked up three consecutive wins against the Melbourne powerhouse.

“I thought we started a little bit slow, it took a little bit of time for both teams to get used to the pitch. It was heavy and not a fantastic surface,” Arnold said. 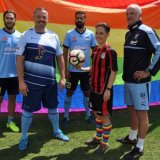 Sydney FC to fly the rainbow flag in A-League first

“The second half was our best performance of the season. We totally dominated Melbourne, we didn’t give them any time on the ball.”

Victory coach Kevin Muscat said there was not much between the teams, and felt the defining moment came nine minutes in when Sydney’s Michael Zullo was only shown a yellow card for bringing Marco Rojas down on the edge of the box as the winger closed in on goal.

“There was obviously one glaring incident that is a game-changer,” Muscat said.

“But if we just discuss the game, as it went on they took the lead but until that point there wasn’t anything in the game at all.

“Then in transition they’ve got some lively players and they caused us a few problems and got in behind us and put a lot of balls into our box.”

9' @SydneyFC defender Michael Zullo is booked for bringing Marco Rojas down on the edge of the area #SYDvMVC 0-0 #ALeague pic.twitter.com/HMsgExSDQV

Sydney’s goal when its Brazilian striker found himself unmarked in the penalty box 50 minutes in, but the goal really belonged to his whole team and was orchestrated by playmaker Milos Ninkovic.

The Johnny Warren Medal frontrunner played the ball inside for his teammates to emulate a warm-up drill to perfection, as Josh Brillante shifted to Alex Brosque and then Filip Holosko, who atoned for an earlier miss with a pin-point cross, which Bobo tapped home.

The Allianz Stadium pitch was a swamp under heavy rain but both teams cut through the quagmire with incongruous ease and fashioned chances aplenty for the 13,310 who braved the wet.

Holosko failed to make goal-mouth contact with a Bobo ball and Rhyan Grant had an audacious crack from distance, while Brosque rifled a left-foot strike over the bar before the skipper was superbly denied by Lawrence Thomas.

Up the other end, former Melbourne Victory goalkeeper Danny Vukovic pulled off a cracking clutch save to stop Jai Ingham from point blank range as Rojas repeatedly carved through Sydney’s defence.

The Kiwi international caused the hosts issues and he soon put Ingham through again, only to watch the 23-year-old lump a lame header straight into Vukovic’s arms.

After the break and one goal down, Victory pressed on.
But if they were going to equalise, the moment came and went just before the hour mark, when Besart Berisha inexplicably skied a gilt-edged chance from inside the area.

Moments later Ninkovic nearly doubled the lead in sensational style with a 30m volley that dipped slightly too late and kissed the roof of the net.

As Bernie Ibini entered the fray so did Fahid Ben Khalfallah, a day after Muscat dodged contractual speculation surrounding the Tunisian’s recent omissions.

But the visitors became their own worst enemy in the last 20 minutes, leaving open space and allowing Ninkovic to weave more magic, only for Grant to direct his final shot straight at Thomas.

Sydney clinches Big Blue and most likely the Premiers’ Plate