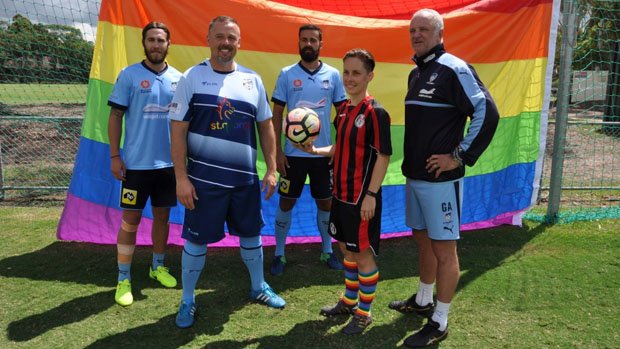 Sydney FC will support the initiative during its match with fierce rivals Melbourne Victory. Photo: Twitter

Last year they wore rainbow laces and this year Sydney FC will step up their Mardi Gras support by walking onto the pitch behind a sea of rainbow flags.

The Sky Blues will be the first club in A-League history to promote LGBTIQ inclusion at a professional game when they take on Melbourne Victory in Friday’s Big Blue, a day before the Sydney Gay and Lesbian Mardi Gras Parade.

“We have a multi-cultural and diverse community and supporter base at Sydney FC and we are committed to welcoming everyone into the Sky Blue family and to our games,” he said.

Sydney FC players will wear rainbow laces in their boots and 2,000 laces will be handed out to the crowd before the match.

CEO Tony Pignata said he hopes other teams will follow their initiative.

“The Sydney FC family is inclusive of everyone and we do not discriminate on account of gender or sexuality,” he said.

Fourteen members of the Red and Black Bloc had their Wanderers memberships suspended and the FFA fined the club $20,000.

Joseph Roppolo, Sydney Rangers president, said he hoped the sanctions would send a strong message, but unfortunately the club has still received homophobic and hateful comments on social media this week.

“It’s clear we have a lot of work to do to change homophobic attitudes which are surprisingly still common and accepted as normal in sporting culture,” he said.

“We deeply appreciate this latest support Sydney FC is showing to our community. ”

Sydney FC to fly the rainbow flag in A-League first