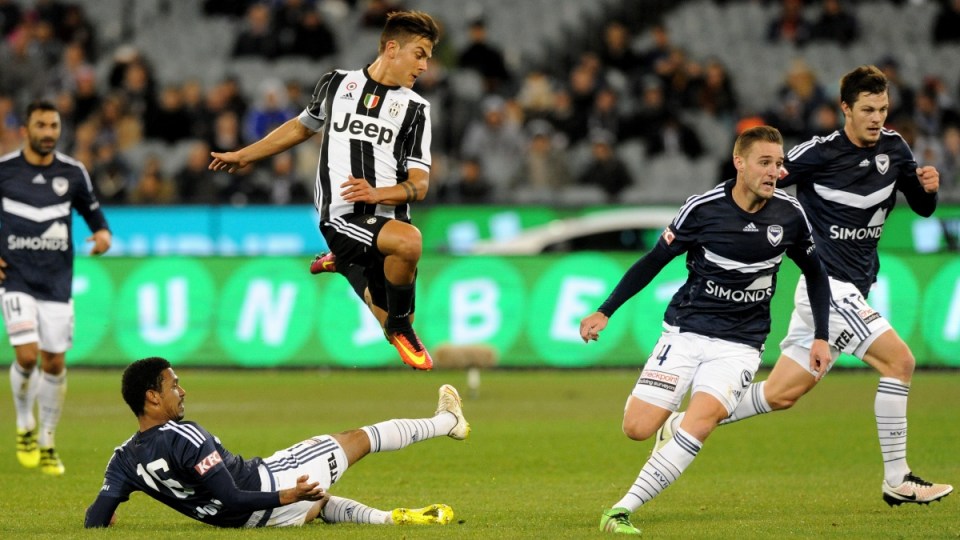 It came down to a penalty shootout. Photo: AAP

An extraordinary goal from the centre circle might have won it for Juventus, before Victory winger Jai Ingham levelled eight minutes from time to force spot kicks.

Victory gloveman Lawrence Thomas won it for the A-League side, saving efforts from Roman Macek and Stefano Padovan for a historic 4-3 win on penalties for Kevin Muscat’s side.

The success was a first triumph for Victory against a touring international side.

The late drama came in contrast to a sluggish first half on a grey and cool Melbourne night.

On a sullen occasion in desperate need of a spark, little-known Spaniard Carlos Blanco provided it.

The defender gathered Thomas’ long kick and perfectly weighted his shot from just in front of the half-way line into the net.

Just 23,174 attended the International Champions Cup opener between Australia and Italy’s biggest clubs, meaning the match was played without atmosphere at the cavernous MCG.

Those that paid premium prices for the less-than-glamour friendly instead saw seven teenagers from Juventus’ youth side among 20 players used.

A drab first half saw Daniele Rugani hit the post and Victory striker Besart Berisha force Juventus gloveman Neto into a sharp save.

Acting Juventus captain Kwadwo Asamoah and Argentinian star Paulo Dybala were among the Serie A champions biggest contributors before they were hauled off among eight half-time changes.

Their goal gave the Old Lady a deserved lead, but Kevin Muscat’s side weren’t to be denied.

Working with half-chances all evening, Ingham made his count.

The 22-year-old substitute gathered George Howard’s lay-off and turned before sending a neat finish inside the back post.

Victory fell behind in the shoot-out when Carl Valeri’s first shot was saved by substitute goalkeeper Emil Audero, but Muscat’s side recovered to take the honours.