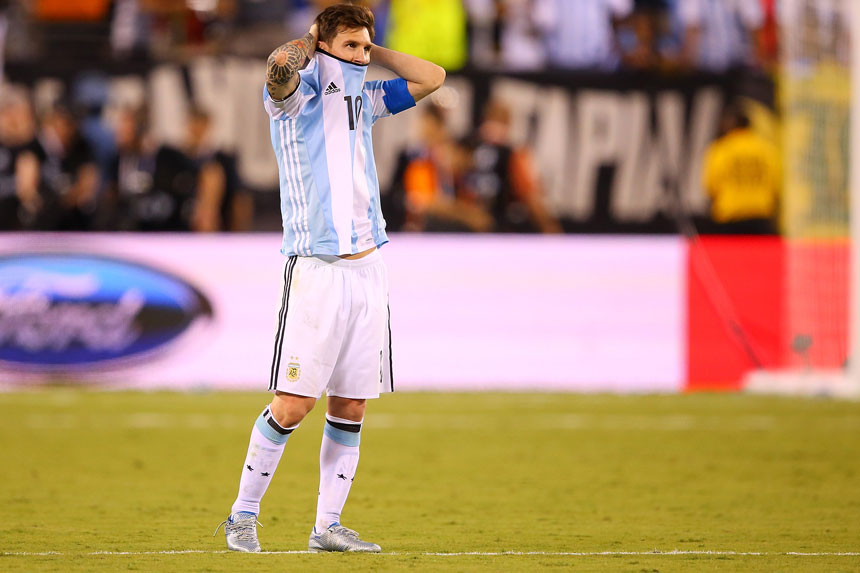 Global superstar Lionel Messi says he has retired from international football after yet another gut-wrenching final defeat.

Widely regarded as the best footballer in the world, the 29-year-old had one thing missing on his glittering CV: winning a major trophy with Argentina.

He had come close before, part of the Argentina side that lost the 2014 FIFA World Cup final to Germany, while he was also beaten in Copa America finals in 2007 and 2015.

In the 2015 edition, Chile beat Argentina on penalties, and history repeated on Monday (AEST), with Messi’s terrible penalty miss contributing.

Both sides finished with 10 men and scoreless after 90 minutes, and extra time, forcing a dramatic conclusion on spot-kicks in New Jersey.

Messi, tasked with taking Argentina’s first penalty, had even more riding on his attempt after Chile star Arturo Vidal failed to convert.

But he blasted his attempt over the bar and Argentina never recovered as Chile won 4-2 on penalties.

“The national team is done for me,” the five-time FIFA player of the year told reporters after the final whistle.

“It’s difficult. It’s a hard moment for any analysis.

“In the dressing room I thought that the national team is not for me.

“It’s what I feel now — it’s a great sadness that I’m feeling again.

“I was the one who missed the penalty that was extremely important. That’s it.”

Messi was also quoted as telling Argentine TV station TyC Sports: “It’s been four finals. It’s not meant for me.

“I tried. It [victory] was the thing I wanted the most.

Lucas Biglia also missed a penalty for Argentina in the shootout.

Substitute Francisco Silva was the hero for Chile, scoring the decisive penalty to give them two Copa America wins in as many years.

Messi expressed his anger with the Argentina Football Association last week on Instagram after a frustrating travel delay.

“Once again waiting on a plane to leave for our destination,” he wrote.

“What a disaster the AFA are. My god!”

Messi, who was named player of the tournament at the 2014 World Cup, left his teammates in disbelief with his shock announcement.

“I don’t imagine a national team without Messi.”

Sergio Aguero, who scored for Argentina in the penalty shootout, said he had never seen Messi as emotional as he was after another final failure.

“Sadly, the one who’s taking this the worst is Leo,” he said.

“It’s the worst I’ve seen him in the dressing room.”

Not the only retirement

Aguero, a star in his own right with his country and English Premier League giants Manchester City, said that several players in the Argentina side were weighing up their futures.

There were reports that utility Javier Mascherano, 32, had also retired after the match.

Aguero added: “There are various players who are evaluating not to continue with the national team.

“It is the worst dressing room I’ve ever been involved in.

“Worse than the World Cup final in Brazil and the other Copa America.”

Argentina have not won a major trophy since 1993 when they lifted the Copa America title.

The retirement of Messi and potential departures of Mascherano and others is a big blow ahead of the 2018 FIFA World Cup, to be held in Qatar.

Messi has scored 55 goals in 112 appearances for Argentina.