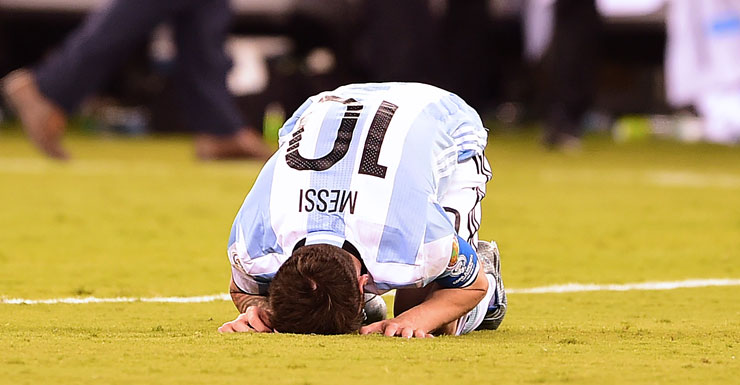 Lionel Messi’s trophy drought with Argentina will continue after his skied penalty contributed to a Copa America final defeat against Chile on Monday (AEST).

Despite being widely regarded as the best player of his generation, Messi has never won a tournament with his country.

And the diminutive Barcelona forward entered the clash hoping it was third time lucky, after defeats in the World Cup final of 2014 and last year’s Copa America.

But, just like the 2015 final of the same tournament, Chile defeated Messi’s Argentina in a penalty shootout.

He blasted his effort over, though, in a stuttering start to the spot-kicks.

Both sides eventually found their rhythm after 120 minutes of scoreless football, with Chile’s Nicolas Castillo and Jean Beausejour bookending five scored penalties in a row.

Lucas Biglia then had an effort saved for Argentina, allowing Francisco Silva to be the hero.

And he showed no sign of nerves, scoring to give Chile a 4-2 victory on penalties in the New Jersey final.

Both sides finished the game with 10 men, with Chile’s task made difficult in the 28th minute when midfielder Marcelo Diaz was given his second yellow card.

Marcos Rojo was sent off two minutes before half time for Argentina, though, leading to a tense second half and 30 minutes of extra time.

Messi scored five goals in the Copa America, including a hat-trick in a 5-0 group stage win over Panama.