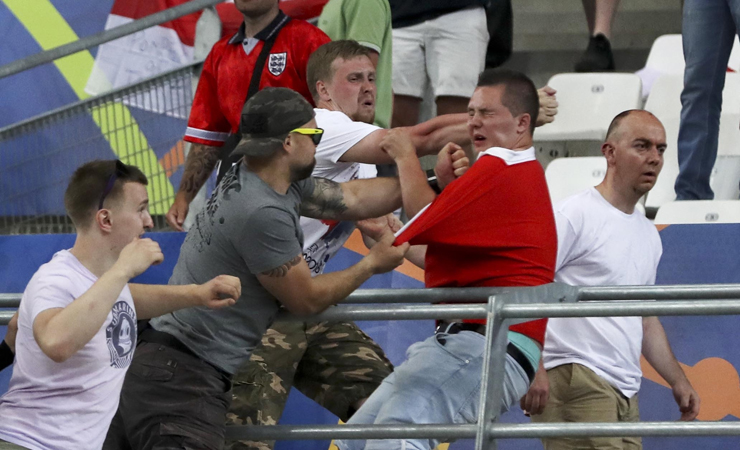 French authorities will deport 20 Russian men next week for their role in the violence that has marred the first week of the European Championship.

Stephane Bouillon, prefect for the region that includes the southern French city of Marseille where the worst outbreak of violence in Euro 2016 took place, said Thursday (European time) that the unnamed men will be deported Monday.

Bouillon said they are suspected of “participation in skirmishes linked to the England-Russia game on June 11 in Marseille” and are currently being held in a detention centre.

The men were among 43 Russian fans detained Tuesday after their bus was stopped by French police near the town of Mandelieu in a check for hooligans.

UEFA has already told Russian soccer authorities that their team could be kicked out of Euro 2016 if there’s a repeat of the violence that surrounded its match last Saturday against England.

Of particular concern to Europe’s governing body is that Russian fans stormed a section of English fans inside the stadium.

The BBC has reported that among the deportees is the far-right leader of the Russian football supporters’ association,Alexander Shprygin.

They were detained on Tuesday while travelling from Marseille to Lille to watch Russia face Slovakia.

Three other detained Russian fans have been jailed for up to two years over the violence in Marseille.

They are also banned from re-entering France for two years. The men received 12, 18 and 24 months in prison.

English soccer’s governing body has also been warned about the behaviour of its fans but the team’s participation in the competition was not under immediate threat on Thursday despite a fresh outbreak of fan violence in France that required riot police to deploy tear gas.

Though English fans in Lille were involved in further unrest Wednesday night at Euro 2016, UEFA has said there are no plans for an emergency meeting of its executive committee to discuss any further warning or sanctions against the English Football Association.

Earlier this week, UEFA’s leadership ruled that England – along with Russia – faced potential disqualification if there was a repeat of the violence that surrounded their match in Marseille.