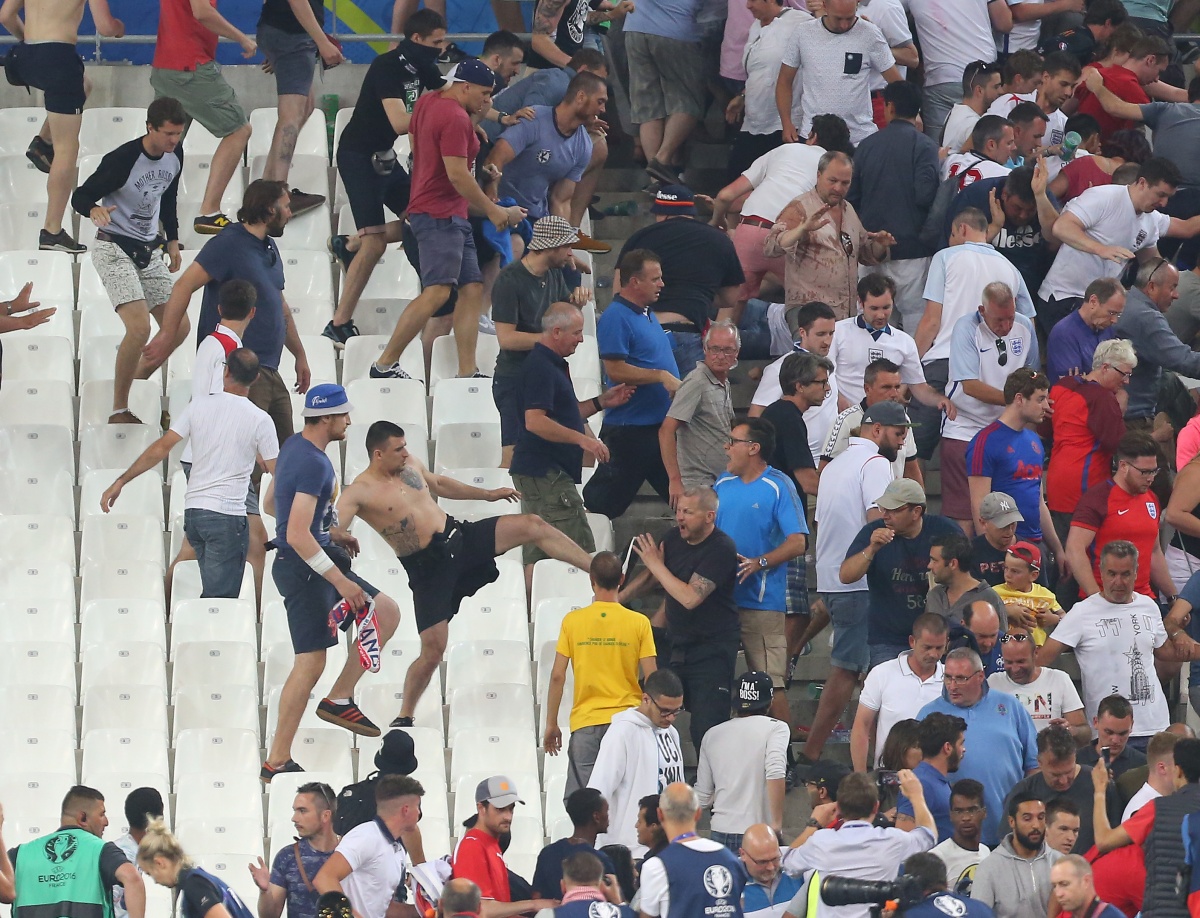 The news came after senior Russian officials praised their nation’s fans for the shocking scenes of violence at the tournament and urged them to “keep it up”.

“Charges relating to crowd disturbances, use of fireworks and racist behaviour had been brought against the RFU (Russian Football Union),” UEFA said in a statement.

The start of Europe’s biggest tournament was marred by several ugly clashes between fans, most notably before, during and after England’s 1-1 draw against Russia in Marseille on Sunday morning (AEST).

French prosecutors said 150 “ultra-violent” Russian hooligans were to blame for the violence, which saw just two of them arrested, but six Englishmen jailed. A total of 35 fans were injured, five seriously, including one who remains in a coma.

But while UEFA has condemned both nations – and threatened them with expulsion from the tournament if the fans are involved in further violence – a series of Russian officials took pride in the acts of thuggery.

Igor Lebedev, an MP for the Liberal Democratic party in Russia, and the deputy chairman of the Russian parliament, blamed police for the incidents.

“I do not see anything terrible in fans fighting. On the contrary: well done to our boys – keep it up!” he posted to Twitter.

“The fault lies with the police and their inability to organise an event such as this.

“And I do not understand all these politicians and officials who are now judging our fans. We have to protect our fans, bring them home and try to understand them.”

Vladimir Markin, a spokesperson for Russia’s equivalent of the FBI, also pointed the finger at the authorities.

He posted on Twitter that police handled Russia’s “normal” fans poorly because all they were used to was “gay pride parades”.

‘Our boys defended the honour of our country’

Lebedev continued ranting in an interview with Russian website life.ru, in which he said he did not understand why the media criticised the country’s fans.

He said they had done nothing unusual and deserved to be forgiven.

“Our fans are far from the worst,” he added.

“I do not understand why so many members of the media are trying to denounce the actions of our supporters – and for what, exactly? We have to look at this objectively.

“I do not think our fans have done anything out of the ordinary, and we need to understand that in 9 out of 10 cases, supporters go to a game to fight, and that this is normal.

“Our boys defended the honour of our country and did not allow the English to defile our homeland in any way.

“Our fans deserve forgiveness and understanding.”

Russian Sports Minister Vitaly Mutko was one of the few figures from his country to criticise the fans, but Lebedev said he would have joined in on the fighting if he had the chance.

“I personally think that if Mutko was with the fans on the stands and not an official, he would also go and fight the English fans since they were the ones who started it,” Lebedev said.

A former spokesman for the Russian Football Union, Andrei Malosolov, wrote in an article that the Russian fans “deserved respect” given that approximately 250 of them fought against “tens of thousands of adult, aggressive, drunk English fans”.

Russia’s next match at the tournament is against Slovakia in Lille on Wednesday (11pm kick-off AEST).

England play the next day in Lens, against Wales, but supporters had been advised to stay in Lille given its close proximity.

It is just 38 kilometres away and Lens is not a major city.

Peter Dutton touted as next Liberal leader as he claimed victory in Dickson
‘The urgency of the situation’: WHO steps in as monkeypox cases erupt around the world
Volodymyr Zelensky: How war will end as Ukraine ‘breaks backbone’ of Russian army
Jim Chalmers decries Coalition waste as Labor hits the hustings amid downpours in Queensland
Anthony Albanese, Scott Morrison cast their votes in Sydney
Australian aces at French Open out to show there’s life after Ash Barty
Russian MP praises hooligans for violent fan clashes
Today's Stories