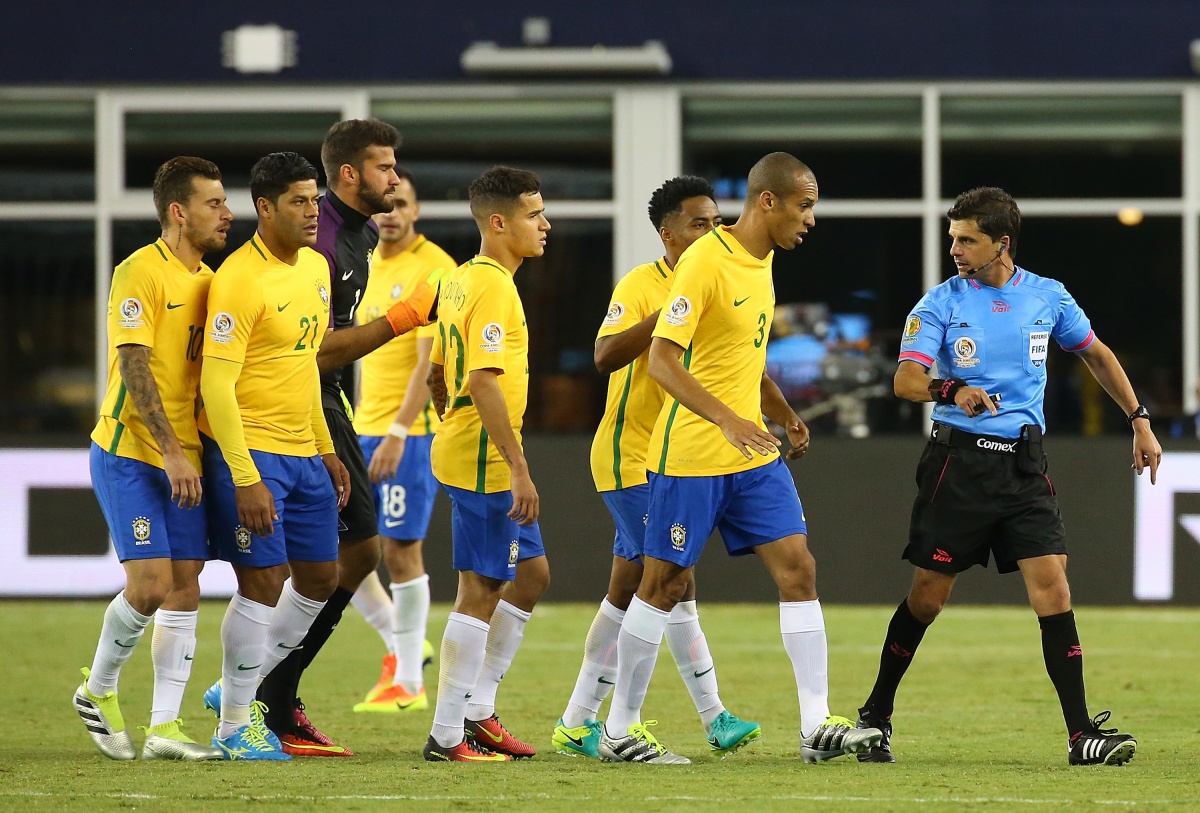 World football giants Brazil have been sensationally knocked out of the Copa America Centenario by Peru, courtesy of a handball goal being dubbed “the Hand of God version two”.

Peru’s Raul Ruidiaz batted the ball over the line from close range in the 75th minute, and the goal was eventually awarded by the referee amid chaotic scenes on Monday (AEST).

The Brazilians enjoyed 65.5 per cent possession in the game and fired 14 shots at goal compared to Peru’s four, but it was Ruidiaz’s handy effort which ultimately proved decisive.

The controversial goal was enough to give the Peruvians a 1-0 win, elevating them to the top of Group B and ensuring Brazil finished third.

It was the first time Brazil have crashed out of the Copa America in the group stage in 29 years. The goal was awarded after almost five minutes of deliberation between the referee and his assistants and could have huge ramifications for Brazil’s coach, Dunga.

1 referee. 2 linesman. A third official. Whoever is on other end of the microphone.

The controversial incident reminded many football followers of the infamous “Hand of God” incident at the 1986 World Cup by Argentine legend Diego Maradona.

He scored a handball goal (video below) disguised as a header in his side’s 2-1 win over England in the quarter-final stage.

Interviewed pitchside after the full-time whistle, Ruidiaz expressed his delight at topping the group and a shaky knowledge of human anatomy.

“I’m happy with the step we’ve taken … Thank God, the referee confirmed the goal,” he said.

“The goal came from a very rapid play, then it hit my thigh, and I don’t understand why there’s so much controversy.”

He could be seen smiling sheepishly with his teammates following the goal.

The early exit comes just two years after what was viewed as a World Cup disaster for Brazil, when they were thrashed 7-1 by a rampant Germany in a home World Cup semi-final, before being humbled 3-0 by The Netherlands in the third-place playoff.

“The players and I cannot change what everyone saw,” Brazil coach Dunga said.

“I am certain that the fans watched the game and saw how Brazil were eliminated, we weren’t eliminated based on football.”

Midfielder Miranda was philosophical: “We saw that the ball hit his hand but you can’t complain.

“[The referee] said he discussed it with four officials and that they didn’t see the handball.”

Peru finished the group stage with seven points with their first win over Brazil in 31 years, while Ecuador’s 4-0 win over Haiti earlier on Monday meant they claimed five points and second spot in Group B.

Another South American powerhouse, Uruguay, were knocked out of the competition on Friday thanks to a shock 1-0 loss to Venezuela, who progressed to the quarter-finals, while Colombia, Mexico, Argentina, the United States and Ecuador are all through.

Peter Dutton touted as next Liberal leader as he claimed victory in Dickson
‘The urgency of the situation’: WHO steps in as monkeypox cases erupt around the world
Volodymyr Zelensky: How war will end as Ukraine ‘breaks backbone’ of Russian army
Jim Chalmers decries Coalition waste as Labor hits the hustings amid downpours in Queensland
Anthony Albanese, Scott Morrison cast their votes in Sydney
Australian aces at French Open out to show there’s life after Ash Barty
England and Russia face disqualification over fan antics
Today's Stories

Brazil bundled from tournament by ‘Hand of God’