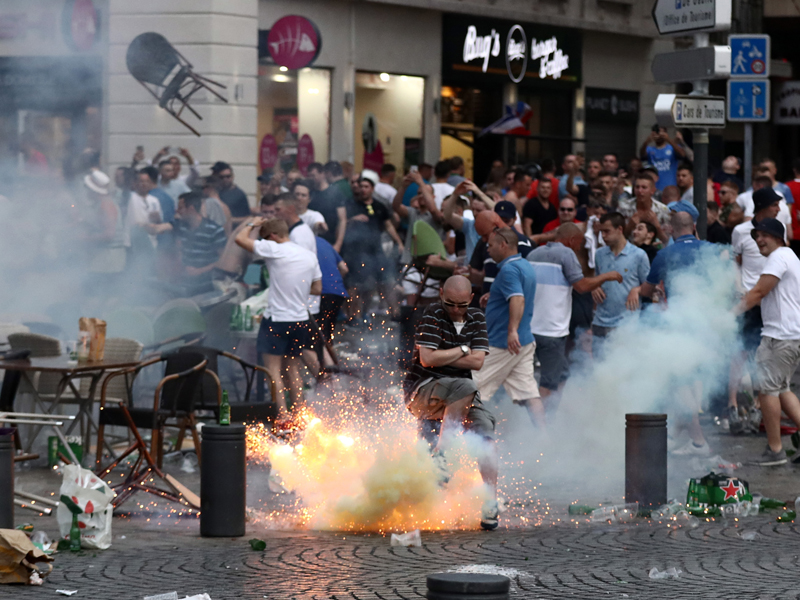 UPDATE: 12:15pm A 50-year-old England supporter is fighting for his life in a French hospital after being beaten by Russian fans before a Euro 2016 game.

Police say the clash happened before the Group B match between England and Russia at the Stade Velodrome on Sunday morning (AEST), which ended in a 1-1 draw.

There was no let-up after the match either as the two groups clashed again when Russian fans charged into a section full of English supporters, prompting UEFA to warn both nations could be disqualified from the tournament should hostilities continue.

A UEFA statement said: “The UEFA Executive Committee would like to express its disgust for the violent clashes which occurred in the city of Marseille.

“The UEFA Executive Committee has warned both football associations that – irrespective of any decisions taken by the independent disciplinary bodies relating to incidents inside the stadium – it will not hesitate to impose additional sanctions on the Football Association (FA) and the Russian Football Union (RFU), including the potential disqualification of their respective teams from the tournament, should such violence occur again.

“We urge both the FA and the RFU to appeal to their supporters to behave in a responsible and respectful manner.

England fans were forced to scale fences to escape the charge, while shocking pictures of a father trying to protect his young son while masked Russian fans were kicking and punching retreating fans around him went viral and left fans fuming at the authorities’ failure to intervene.

On Sunday evening (local time) two people were injured in Lille, in violence between German and Ukraine fans.

A father who has to ask ‘stop’ to come out from the stadium during the clashes, at Velodrome. Sad, sad, sad. pic.twitter.com/jvplNjjn6N

Four years ago Russia was sanctioned and handed a suspended six-point deduction following crowd trouble in Poland at Euro 2012.

Meanwhile, the critically injured England fan suffered a heart attack and had to be resuscitated by police. It appears he was repeatedly kicked in the head.

Authorities said six other people were “seriously injured” with dozens of others also treated for wounds.

Marseille police spokesman Matthieu Duroselle said: “There is one English fan that has been badly injured.

“His heart stopped but it was restarted by a police officer who provided heart massage at the scene.”

The beatings occurred near the Vieux-Port district of downtown Marseille for several hours despite the deployment of riot police, who used tear gas and water cannons to contain the skirmishes.

Amid the broken beer bottles and grey clouds of tear gas that filled the air during the afternoon, families and tourists walked around the picturesque port, sometimes forced to skirt around lines of riot police leaning on their shields.

Groups of people watched the chaos from the rear decks of two gleaming white yachts.

TV footage showed fans throwing chairs yanked from restaurant terraces and scuffling on a staircase, where one man was seen kicking another one down the stairs.

Among those caught up in the violence was the wife of England and Leicester striker Jamie Vardy, Rebekah Vardy.

She wrote on Twitter the event was the “worst experience ever at an away game”. “Tear-gassed for no reason, caged and treated like animals. Shocking!” she said.

In Nice, Northern Ireland fans clashed with locals in the French city on Saturday, BFM TV reported, hours after the violent skirmishes between English and Russian supporters.

Seven people are believed to have been injured in Nice with bottles and chairs thrown as riot police moved in to contain the scuffles.

European soccer’s governing body, UEFA, condemned the day’s events and is set to launch an investigation.

“People engaging in such violent acts have no place in football,” it said in a statement.

Marseille’s police chief Laurent Nunez told France Info radio that 35 people were injured in Saturday’s disorder and that eight people were arrested, bringing the total count of people arrested in Marseille to 15 over two days.

Watch some of the shocking scenes in France below:

England fans trying to escape after the final whistle pic.twitter.com/PFDXMqBxXy

-with AAP and agencies