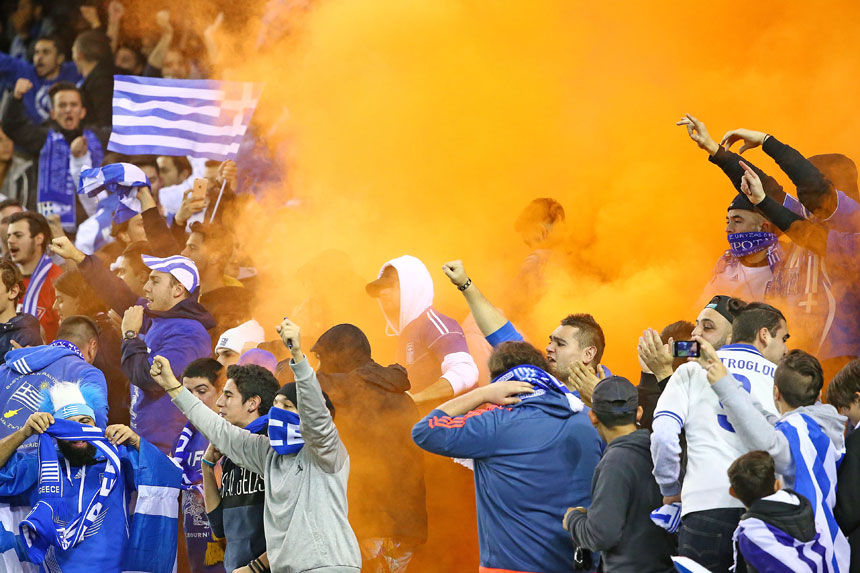 Today show co-host Lisa Wilkinson has refused to back down after criticising “idiots” who ignited flares before and during Australia’s friendly with Greece in Melbourne on Tuesday evening.

Much of the post-match talk surrounded the use of flares in the streets of Melbourne before the match, while two were also lit inside Etihad Stadium.

Greece won the friendly 2-1, with Giannis Maniatis’ stunning goal from inside his own half the highlight.

Victoria Police said the lighting of flares was “inherently dangerous” and that they were examining CCTV footage to identify the culprits.

Speaking on Today on Wednesday morning, Wilkinson condemned the fans responsible, saying: “And here’s the thing. That just doesn’t look to me like Australia. We don’t do that stuff.”

She then followed up on Twitter, but her comments angered many. Victoria Police’s acting assistant commissioner Russell Barrett said that there were “30 flares lit” and that they could cause serious harm.

“We have seen instances overseas and in Victoria within the last two years where people have been seriously injured as a result of coming into contact with the flares,” Assistant Commissioner Barrett said.

“We are currently investigating and looking at CCTV footage to try and identify who are the perpetrators and when we do, we will prosecute them.”

He added that an investigation into a scuffle between fans and police was ongoing, and that one of the flares was thrown under a bus.

“The potential for that [bus] to ignite and then cause significant damage is real,” he said.

“Those that have lit flares that have endangered people will be charged with conduct endangering persons.”

Football Federation Australia spokesman Kyle Patterson said those responsible for the flares would be banned from attending games for five years.

“We’ll find them, identify them and they’ll get a five-year ban,” Mr Patterson said.

“The scourge of flares is such that it has become, for some people, almost a game to try and ignite these flares to conceal them from police and security.

“There is a culture in some parts of the world, in southern Europe and in South America, that flares are part of the show.

“Unfortunately that culture, which we do not in any way approve, has found its way here into what I’ll call mindless individuals.”

“This is really disappointing to see that a handful of people could ruin it for the rest of the community who just want to go out there and enjoy themselves at a wonderful game,” Mr Eren said.

“Flares are always dangerous when used in an inappropriate way as they were last night.”

Jorge Menides from Melbourne’s Greek Centre offered a different view, saying the media were far too obsessed about flares.

“It’s disappointing a few people have done the wrong thing but I think there is also almost a hysteria when it comes to flares and football games,” Mr Menides said.

“I’m not suggesting by any stretch of the imagination that people should be lighting them.

“I do feel that the Australian media in particular tends to obsess about them at a level that’s just unwarranted, quite frankly.

“I also think that what isn’t being discussed is what a great celebration it was last night and what a great goal it was and how happy people were walking in and out of that stadium and there was dancing.”