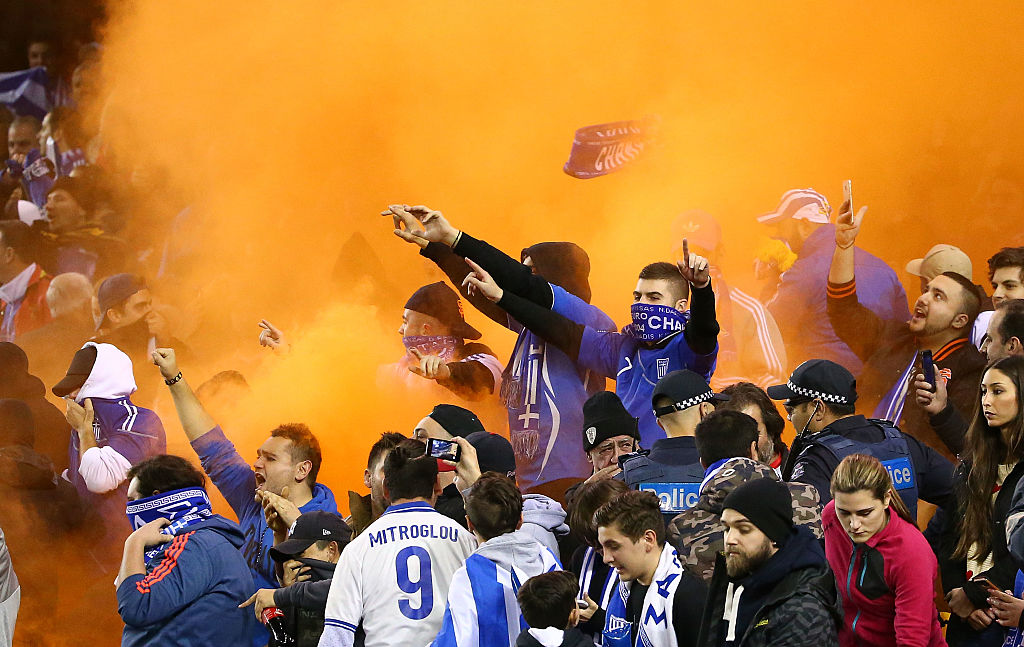 Football Federation Australia (FFA) says it will impose five-year bans on those found to have ignited flares in Melbourne’s CBD ahead of Tuesday night’s friendly match between Australia and Greece.

A number of flares were let off on Tuesday night, as hundreds of soccer fans made their way to Docklands for the match.

Police, including mounted officers, were on hand as supporters of the away team marched down Lonsdale Street, the city’s traditional Greek precinct.

The sky turned to a pink haze as one large group gathered outside a restaurant near the corner of Russell Street about 6:30pm, chanting and waving flags as they blocked streets and after-work traffic.

One member of the group was seen throwing a flare into the path of an oncoming bus, which managed to drive around it.

In a statement, FFA said is was “disappointed” over the “anti-social” behaviour.

“FFA reiterates its firm position. We do not want these people at football matches in Australia,” the statement read.

“FFA will work with Victoria Police to identify the offenders and impose mandatory bans of five years on those found to have ignited flares.”

Earlier, police had said they would be cracking down on anyone caught with flares at the match.

“A number of flares have been let off prior to the game and at the grounds by supporters who have no regard for other people’s safety and the integrity of their sport,” Acting Assistant Commissioner Russell Barrett said.

“Anyone found with flares or any other prohibited items in their possession face serious charges”.

Body found in Vic creek, amid further flood warnings
Woman likely to face charges of stabbing her children
Meghan and Harry set return date – but family plans are up in air
Australia’s Cambage takes break from WNBA
Iran denies attack on Salman Rushdie
Giuliani targeted in election criminal probe
This might be the best goal ever seen in Australia
Today's Stories