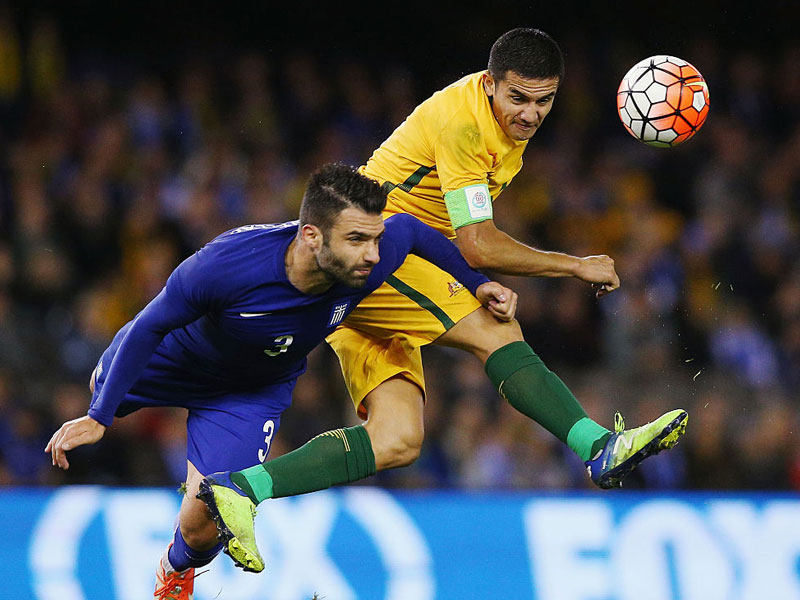 The Socceroos have fallen 2-1 to Greece, beaten by a wonder goal and their own disorganisation in their final match before September’s World Cup qualifiers.

Giannis Maniatis’ David Beckham-esque screamer from inside his own half was the highlight of a fiery second friendly on Tuesday night at Etihad Stadium.

It was an uncharacteristically poor performance from Ange Postecoglou’s men, and one worlds away from their impressive display against England 10 days ago and even Saturday’s 1-0 win over Greece.

Even the illustrious Aaron Mooy was off colour, his dead-ball deliveries lacking their usual spark.

The Socceroos started with no intent and had barely made it out of their own half when Greece opened the scoring in the eighth minute.

A cheap giveaway by Mark Milligan and a quick counter-attack put the ball at the feet of Petros Mantalos, who curled neatly over goalkeeper Adam Federici’s head.

Federici, given a run in place of first-choice Mat Ryan, was beaten even more roundly soon later – but none of the 33,622 spectators could even have seen what was coming.

Maniatis stole the ball just inside Australia’s attacking half and, seeing the custodian well off his line, executed an exquisite lob that sailed over Federici’s head and into the corner of the net.

It was the story of a disorderly first half from the usually free-flowing Australia, described by former Socceroos goalkeeper Mark Bosnich as pathetic.

“That’s the worst performance I’ve seen probably under the reign of Ange Postecoglou in quite some time,” the Fox Sports pundit said.

“And they probably got what they deserved – which is nothing.

“Some of those tackles that the Australians made were unacceptable. If that was in a proper World Cup, they would have been sent off.”

One bad offender was starting debutant Alex Gersbach, who was lucky to stay on the field after a reckless late challenge amid several angsty moments between the sides.

Minutes after skying a close-range chance, the centre-back capitalised on Tim Cahill’s deflected shot off a corner to head home.

But by that point, neither side could string together a clean enough passage to add to the scoreline.