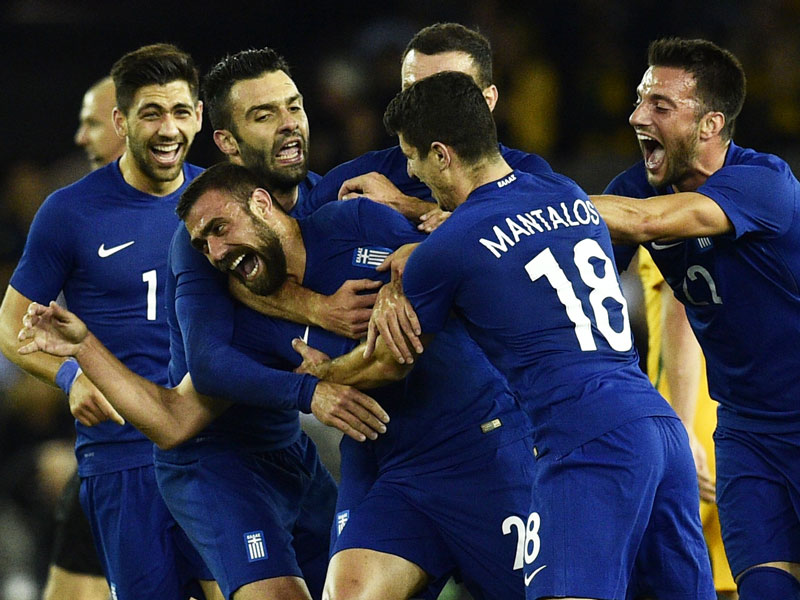 It was a moment that fans who were there to see it will never forget.

One word was enough, for Giannis Maniatis’ long-distance goal against Australia was a thing of beauty.

The Greece defender stunned – and silenced – the 33,622-strong crowd at Etihad Stadium on Tuesday with a piece of superb individual brilliance in the 21st minute.

It was the undoubted highlight of Greece’s 2-1 friendly win.

Watch the stunning goal below:

With the Socceroos on the back foot in the second of two international friendlies against the Euro 2004 champions, and already a goal behind, Maniatis pounced on a loose ball and smashed an effort towards goal from inside his own half.

Attempts like this are usually saved for the truly sublime – read: not a Greece defender – or the incredibly frustrated.

Yet Maniatis saw an opportunity and seized it. Adam Federici, given a rare chance to start in goal for Australia, was way off his line.

Out of position, his desperate attempt to scramble back and keep out Maniatis’ effort was in vain: it bounced barely a yard before the line before nestling into the back of the net.

There have been some great goals scored in Socceroos games in recent years, but all came from the boot of an Australian. Think Tim Cahill at the World Cup. Mark Bresciano’s volley against Bahrain. Josip Skoko against Greece.

Those who would know can’t remember a better goal scored against Australia.

Fox Sports commentator Mark Bosnich said Federici’s mistake was “horrible” and that he had no one to blame.

“It’s difficult for me being an ex-goalkeeper when you make a mistake – it’s horrible – but it’s no one else’s fault but his.”

That was a viewpoint Australia coach Ange Postecoglou did not share.

When quizzed by The New Daily about the error, he took responsibility.

“It wasn’t a horrible mistake,” the couch replied.

“‘Bozza’ has got his views. ‘Feders’ was doing what he’s supposed to be doing.

“I certainly don’t hold Adam responsible for that goal. It’s the way we want to play [to have a keeper high up the field].

“It’s not a new thing. In the 30-odd games I’ve been charge of, that’s the first time it’s happened. If it takes another 30 or 40 to happen again, I’ll cop that, as long as we are able to play our football.”

Much of the pre-match talk surrounded Tim Cahill’s club future after he suggested he could address it once the game was complete. But the Australia star, who hailed Maniatis’ goal, told reporters he was just focused on returning to China.

How the match played out

Australia started poorly, with Trent Sainsbury and Bailey Wright conceding possession easily in their defensive third, and it was another error that set up Greece’s opener.

Mark Milligan dallied on the ball, was dispossessed by Apostolos Vellios, and Andreas Samaris’ clever ball played Petros Mantalos through on goal. He finished cleverly from an angle in the eighth minute.

Maniatis then took centre stage, and Greece could have been 3-0 up after 22 minutes, only for Samaris to lob onto the roof of Federici’s net when the goalkeeper was poorly positioned again.

The Socceroos improved after that, but lacked cutting edge against their well-organised opponents.

It took Vasilis Torosidis to hit the post in the 56th minute to wake them up after the half-time break and Sainsbury nodded in from close range just before the hour mark.

It proved no more than a consolation, though, leaving Postecoglou with some work to do before the third Asian phase of 2018 World Cup qualifiers begins when Iraq visit on September 1.

This might be the best goal ever seen in Australia