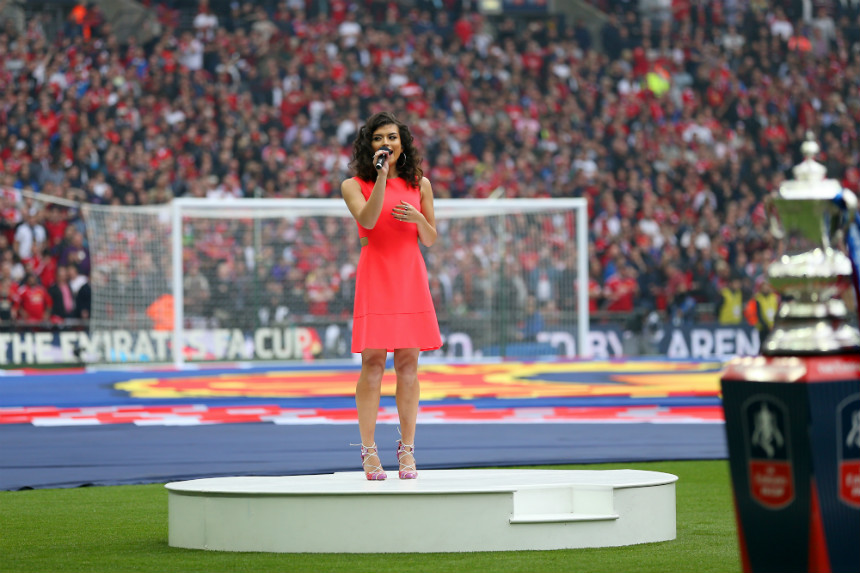 British singer Karen Harding might feel a little guilty when picking up her pay cheque for performing at Sunday’s (AEST) FA Cup final.

Harding was tasked with the honour of singing the national anthem of the United Kingdom, God Save The Queen, before the decider of the world’s oldest football competition between Manchester United and Crystal Palace.

But the 24-year-old’s performance at iconic venue Wembley never got going after what was later blamed on “technical difficulties”.

Harding missed her cue to perform the anthem and instead stood there silently and smiled while fans and players begun to sing.

She obviously had earplugs in as even the crowd’s prompting failed to get Harding going.

As stars such as Manchester United’s Wayne Rooney looked on bemusedly, Harding finally started singing in the fifth line of a seven-line anthem.

And although she finished with aplomb, the performance left organisers – and Harding – with egg on their face.

BBC commentator Guy Mowbray offered Harding an out, saying on the broadcast that went around England: “There’s a lot of noise around the place – (it is) very easy to miss your cue.”

Harding took to Twitter afterwards to confess she was “mortified” at her blunder.

And she then posted a video of her practising the anthem in a bid to show her followers what she would have sounded like.

OMG. Biggest audience of my life and I get technical difficulties! Argh so sorry Guys!!! Xx

Mortified!! I don’t know what happened. 🙁

Harding then re-tweeted hordes of messages from fellow Twitter users, including one that said #sackthesoundguy.

Others that she re-posted said things like: “You were prepared, the well paid sound techs were not” and “clearly not your fault, presume it was the earpiece not functioning?”.

She then made a joke and promoted her YouTube channel, posting: “So… if you want to hear what I actually sound like LOL…check out my @YouTube… #KarenHarding x”.

The irony that Harding’s debut single was called Say Something was not lost on other Twitter users.

Harding rose to fame after appearing on The X-Factor in Great Britain.

After the anthem disaster, Manchester United went on to record a 2-1 win after extra time.

Juan Mata’s swift reply forced extra time but Manchester United’s chances took a significant blow when Chris Smalling was sent off for a second yellow card in the 105th minute.

Despite that setback, though, Louis van Gaal’s side won thanks to Jesse Lingard’s 110th-minute goal.

Jedinak said afterwards that his side’s failure to keep it tight after their goal cost them.

“I’m proud of my team and my teammates,” Jedinak said.

“It’s not easy to take. Our players out there gave everything and it’s never easy to be on the losing side after a night like that.

“We knew we had to try and keep them out for that five minutes after (we) scored but we didn’t, they got back in and full credit to them for getting back and getting that all-important second goal which effectively won them the game.

“We were buoyed on by such a fantastic crowd and it would have been nice for them (if we won it), but we came up short.”