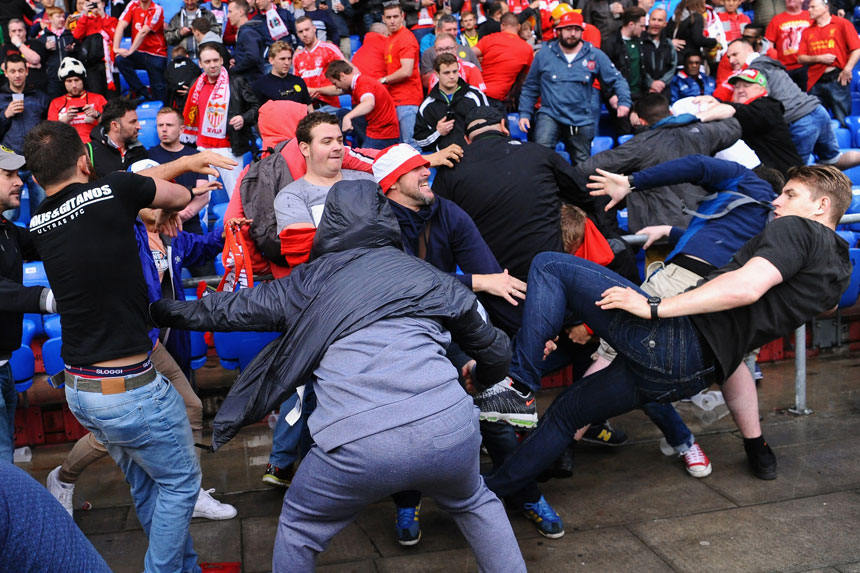 The start of the Europa League final on Thursday (AEST) was marred by a section of Liverpool and Sevilla fans who began fighting before kick-off in Basel, Switzerland.

Behind the Liverpool goal, a brawl kicked off between the rival supporters who had to be separated by a wall of riot police before the final of Europe’s second-tier continental tournament got underway.

The brawl was quickly contained before being roundly condemned by the majority of fans in the stadium.

Sevilla sold only 7,000 of its 9,000 ticket allocation, meaning there was no segregation between the Spanish club’s fans and Liverpool supporters.

When the match started, Sevilla survived a first-half battering to beat Liverpool 3-1 and win the competition for the third year in a row.

Liverpool dominated the early stages and went ahead through an exquisite goal by England striker Daniel Sturridge, who nonchalantly curled an inswinging shot inside the far post with the outside of his left foot.

Sevilla clung on until half-time and hit back dramatically when Kevin Gameiro turned in Mariano Perreira’s cross less than one minute after the re-start.

Coke fired Sevilla ahead and added a controversial third after the linesman initially raised his flag for offside, only for referee Jonas Eriksson to award the goal following a lengthy consultation.

“We have showed throughout the competition that we are good enough to win it, but we didn’t on the night that mattered most,” Liverpool captain James Milner said.

Liverpool will now not play in a European competition next season.

“Massive blow for a club of our stature. We have been in two finals this season but not managed to get over the line,” Milner said, referring to Liverpool’s League Cup final loss to Manchester City on penalties.

“We were ready for the second half but gave away a sloppy goal and never really got back in the game.”