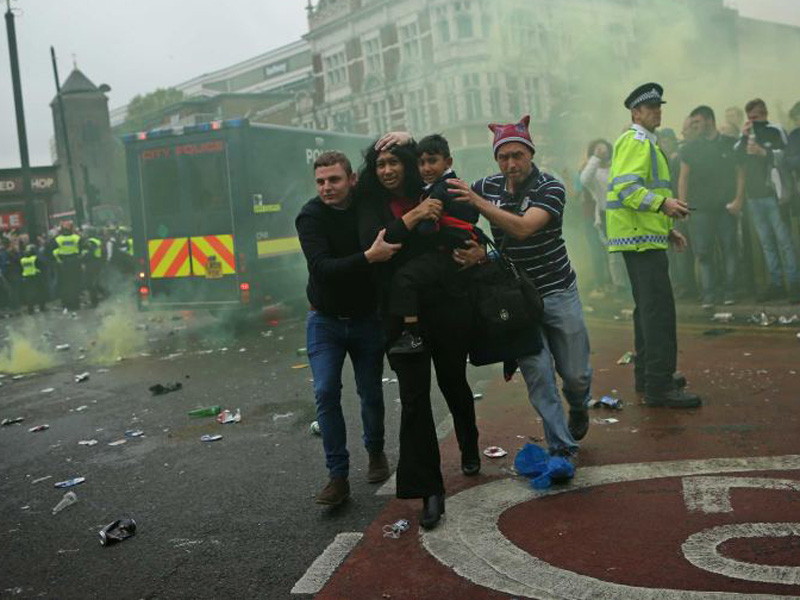 Huge crowds, many without tickets, congregated outside the stadium for the sell-out Premier League clash, West Ham’s final home game before moving to the 60,000-seat Olympic Stadium after 112 years at Upton Park.

Man Utd’s team bus became bogged down within sight of the stadium in Green Street where West Ham fans began pelting the windows with bottles and glasses while a smoke canister was also set off, adding to the chaos.

Police eventually managed to escort the Man United squad to the entrance less than an hour before the scheduled kickoff, which was delayed by 45 minutes to 8.30pm (local time).

“It wasn’t nice, the coach got smashed up,” said captain Wayne Rooney.

Man Utd manager Louis van Gaal, whose team went on to lose the game 3-2, looked visibly shaken by the incident as he walked towards the dressing rooms.

“The way we have been received is not the proper way of course,” the Dutchman said.

“That makes all the influence on the players and that is a pity.”

There was little sympathy for Man Utd from West Ham’s co-chairman David Sullivan.

“I think the police and officials have been kind, I would make them kick off at 7.45 (local time) if it was up to me.

“Manchester United know the score, they should have been here at four o’clock,” he said.

London’s Metropolitan Police said in a statement that one officer and a member of the public sustained minor injuries but no arrests were made.

The Football Association announced that it would launch a full investigation.

“The FA strongly condemns the unsavoury incidents this evening,” it said in a statement.

West Ham have played at the 35,000-capacity Boleyn Ground since 1904 but will begin next season in the Olympic Stadium after agreeing a 99-year lease.

A special farewell party was held after the final whistle on Tuesday.

Before kickoff a marching brass band played the traditional football hymn Abide With Me while images of the club’s favourite son, England’s 1966 World Cup-winning captain Bobby Moore, were displayed on video screens.

So desperate were some West Ham fans to attend the historic fixture there were reports of tickets being sold online for STG2,000 ($A3,922).

Watch video from onboard the bus as it was attacked: