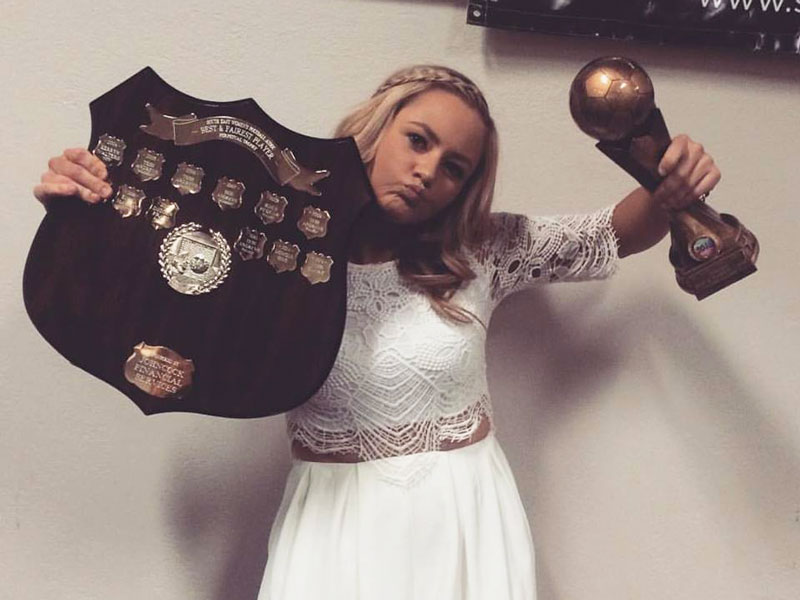 Tess Clark has described her unique FFA Cup record as a “huge honour” after becoming the first woman to feature in the competition.

The 26-year-old appeared as a second-half substitute for South Australian side Gambier Centrals in their first-round loss to the Western Strikers on April 2.

Clark, a central midfielder, plays against men every week for her club and has done so since 2014 – but her FFA Cup appearance was a first.

“It has created a lot of interest, because the FFA Cup is so huge,” she told The New Daily.

“It’s a huge honour to have that record. It’s a bit overwhelming but it’s great that it has created all this talk.

“Hopefully it’s shown that these opportunities do exist for women. And if people want me to be a role model for other women, I’m happy to be.

“Hopefully a few other women see the story and try to follow in my footsteps.”

Clark first started playing against boys at the age of 11 and did so at the Gambier Centrals until under-17s, before switching to women’s football, where she dominated.

But even six player-of-the-year awards in the South East Women’s League could not convince her that she was cut out to play against men in senior football.

“I was coaching the Miniroos [junior squad] at the club and the men were training afterwards,” Clark said.

“I was asked to stay and train a few times but I didn’t think he [Shane] was being serious.

“But he kept asking and said ‘we’d really love to have you’. I said no at first and, to be honest, needed some convincing.

“I did doubt myself but once I got into it, it came a lot easier. I love playing against the men and it has really changed my game for the better.”

Clark said the reaction from fans and opposing teams has been overwhelmingly positive.

“All the boys are really good about it and we all have a laugh.

“There’s the odd bad reaction [from opposing teams or crowd] but for every one of them, there’s been 100 good reactions. Everyone’s been really good.”

A spot won on merit

Her performances have improved the club’s first-team squad, he said.

“She was a bit reluctant but she gave it a go, and after two or three games for the reserves, she was in our first team,” he told The New Daily.

“She’s been in and out of the first team for the last three years and she’d have to be close to 50 games in the men’s sides.

“She’s been runner-up in the reserves best and fairest twice, which is a pretty good effort.

“She plays in central midfield and is very skilful. That’s the main reason we approached her.

“I can’t remember other girls playing seniors … but she gets her games on her performance and training. It’s nothing more than that.” Trailblazer Tess takes on the men in FFA Cup