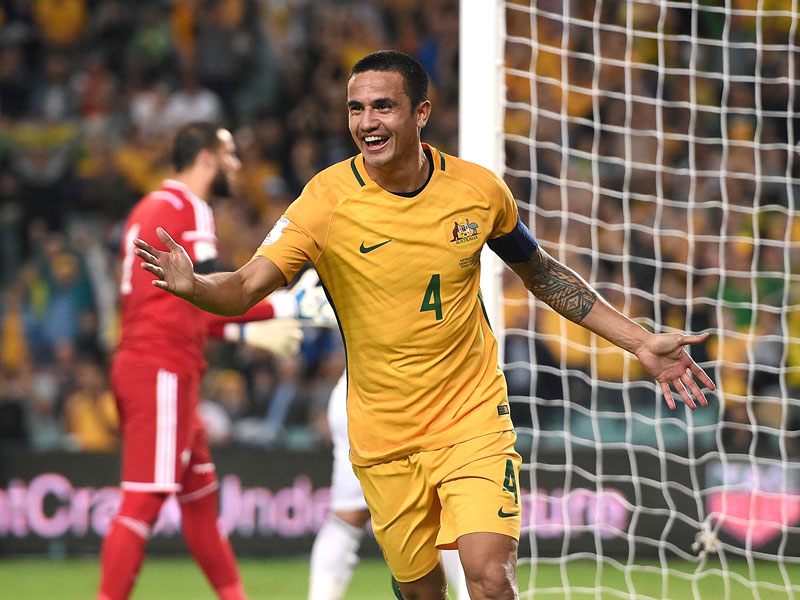 The Socceroos have secured passage to the final stage of World Cup qualifying with an emphatic 5-1 win over Jordan.

Aaron Mooy, Tom Rogic and Massimo Luongo added goals to Tim Cahill’s brace at Allianz Stadium on Tuesday night, to seal Australia’s place at the top of their qualifying group and take them one step closer to a fourth consecutive World Cup appearance in Russia.

Their domination of Harry Redknapp’s Jordan was testament to how far Ange Postecoglou’s Socceroos have come since jolting to a shock 2-0 defeat to this very side in Amman last October.

Save for a couple of attacking forays, there was no reply to Australia’s creative class.

And the fan favourite of the 24,975 crowd was undoubtedly Robbie Kruse, who notched three first-half assists in his first international match in more than a year, having endured a tumultuous time with injury.

Kruse was one of five changes from the starting XI that trounced Tajikistan 7-0 in Adelaide last week, with Postecoglou opting not to risk skipper Mile Jedinak with his thigh niggle.

It was the man standing in as captain who led the frontline – and the scoring.

Cahill opened the Socceroos’ account with the simplest of tap-ins in the 24th minute, after Aaron Mooy unleashed Kruse to deliver a low, hard cross.

Kruse showed his tactical vision again 15 minutes later, sliding the ball out to the left where Mooy was waiting with acres of space.

The Melbourne City star swooped to the edge of the box and unleashed a left-foot strike into the far corner past advancing Jordan goalkeeper Amer Shafi.

On the tick of halftime Kruse delivered once more, this time from the left, to where a loitering Cahill was poised to head home his 47th international goal, in the trademark style of Australia’s all-time leading goalscorer.

Things got nasty in the second half when Yousef Mohammed landed a horrible karate-kick challenge on Kruse that left the Bayer Leverkusen player splayed on the ground and incredibly only resulted in a yellow card.

After several worrying minutes Kruse was up, and soon substituted to cheers.

By then, Jordan were already dead and buried, but it didn’t stop the onslaught.

Rogic, fresh from his classy brace against Tajikistan, executed a cheeky cut-back and nipped a superb close-range finish before Chris Ikonomidis supplied a pin-point cross for fellow substitute Luongo to finish off.

Jordan finally started to look dangerous and substitute striker Abdallah Deeb curled a lovely consolation goal past a leaping Mat Ryan in the 90th minute, but it too little too late.